It's not often that an open source project gets to put out the call for help preserving a piece of history. Usually, open source calls to arms are about fixing massive problems, or plugging security holes like those found in OpenSSL TLS a few years back.

But today I have the distinct pleasure of sounding the collaboration horn loud and proud to you, the readers of Gamasutra. The Museum of Art and Digital Entertainment needs your help bringing Habitat back online. How did we get here, and what is Habitat, you ask?

Habitat was a graphical MMO designed for the Commadore 64 and the Q-Link online system in 1986. It was built by LucasFilm Games by Randy Farmer and Chip Morningstar. The Q-Link service is the predecessor to America Online, and thus, Habitat ran on the same servers as that service: Stratus VOS servers.

Habitat was build in PL/1, and was designed to support thousands of users. That limit was never tested, however, because game was very expensive to play on Q-Link: users paied by the hour for access. In 1988, the game's name and world was changed to Club Caribe. Even later still, Habitat morphed into a dozen other varients after being sold off to Fujitsu.

In 2014, I was preparing an exhibit to go along with the LucasArts post mortem talk at GDC that year. In the course of my research, I contacted Chip and Randy and asked if they had anything interesting we could show about Habitat.

Chip emailed me the freaking source code. Can you imagine my delight? This never happens. No one gives us source code. Even as one of the world's few established institutions capable of preserving videogame source code for the long term, we never get source code.

Naturally, I felt obligated to do something with these sources. That wasn't exactly the easiest task in the world, however, as it required a Stratus VOS server to compile. Stratus still exists, but their VOS machines are all legacy systems inside banks and missile silos. They rarely get upgrades, and the platform itself is byzantine and based on the Multics way of thinking, not the UNIX way of thinking.

Still, I contacted Paul Green at Stratus and he was overjoyed at our effort. He sent us a pallet of materials and a full server. In 2015, we held a hack-a-thon to put together the pieces. We discovered that we were missing libraries from Q-Link, and that those would be inside AOL on backup tapes.

So I cold-caleld the chief counsel there and asked for the libraries. I can't really say much else there, but rest assured, the libraries are coming. But they did take too long for our tastes, so we moved on.

Thus, Randy decided to rewrite the source code from scratch, using the open source Elko server he and Chip had rebuilt. If you don't know about Chip and Randy, they were so far ahead of their time with Habitat that they have made careers out of rewritting that original server a half dozen times.

If you're looking to build your own MMO, you could do a lot worse than forking Elko. It comprises 20 years of experience building large scale game server code. If you're wondering how to get started with it, contributing to Habitat is a great way to get started! Chip and Randy are always so far ahead of the curve, their efforts don't often amount to successful games, but instead, landmark, groundbreaking technological advancements that others will eventually use.

You know, things like JSON. Chip and Randy invented the JSON way of doing things back in the Habitat days. The rest of us didn't realize it until 20 years later.

Chip, Randy, and their various teams over the years built some amazing things, too. Like E, a programming language designed to allow for maximum security and reliability. That's being reworked now, too, as the Frozen Realms proposal for JavaScript. 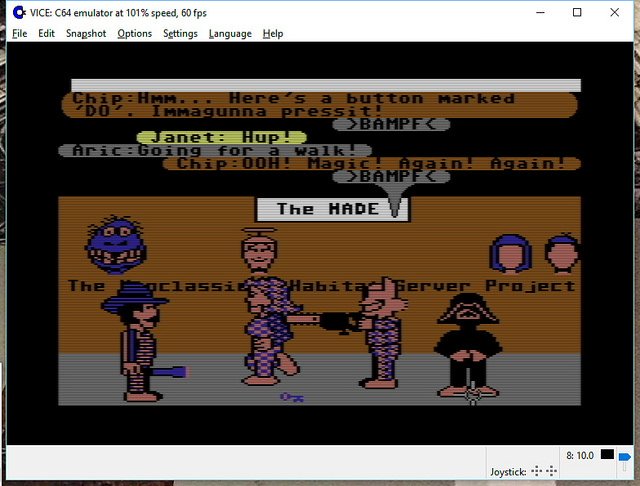 I say all that to say this: Randy and Chip have begun porting Habitat to a modern server platform. Using Elko, they can spin up a Habitat server inside Google Cloud Engine, and we can all connect to it and help them debug, add, and expand it.

And this is what we need from you, Gamasutra reader: your help on this open source project. The original server code is online under the MIT license, but the code Randy has forked out is over here.

Randy has setup a Web page and a Twitter feed for the project. Now, we just need you to come help us rebuild the world and debug all the features. Features like disease. Murder. Room ownership. The game had many firsts, including in-game currency, avatars, and in-world events.

So come join the Slack. Fork the code and help us hammer down some bugs. Sign in and help us test realms. We're not ready to open the floodgates to end users yet, but if you know how to use a shell, Vagrant and Eclipse, you can be of great help to us.

With any luck and a little of your help, Habitat will be back online and playable by the public for free by the end of this year. Come help us preserve a piece of gaming history!