PAX East 2016 was our 8th PAX in a row. We learned a lot, especially looking back at our first "orange branding" attempt which came out of pure accident 2 years earlier at East 2014. In this post I want to talk about booth layouts, design, and in general how to make more of your showcase.

Your booth is what makes your brand, and being inviting creates fans. The people that come to PAX are very, very important - they're the ones buying tickets to events that sell out within minutes. Make them happy. 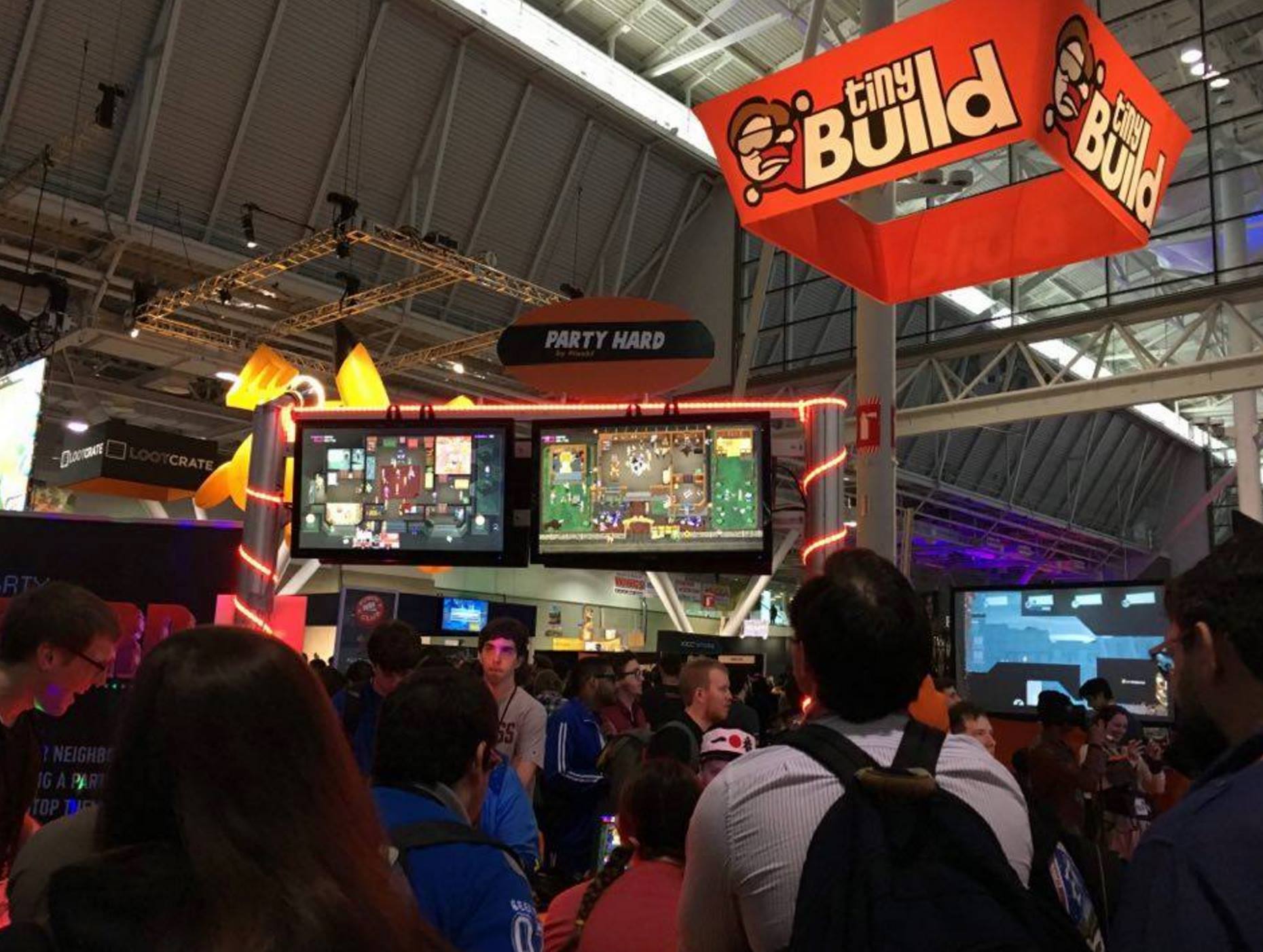 So here are top7 tips.

I see plenty of booths, large and small, design in-wards facing layouts. It's stupid. Don't do that. You don't want to create walls around your space. You want people walking buy to easily get a glimpse of what's going on and not have restrictions that'd prevent people from leaving.

Most constructions will force you to create a "back" for the booth. If you're in a smaller space, you're probably already backed up to a wall -- so there's not much choice there. But if you've got an island space, you really need to figure out what's the most dead spot and put your "back" there.

Then make sure everything leading up to the back of the booth is open and see-through.

3. Make sure there are no dead corners

Once you've figured out the face and layout, try walking around. Remember -- people will stop and stare at things. You need to have enough space so that traffic never stops. It's important so that the booth has good flow. Maybe placing these 2 monitors so close isn't a good idea, and having an opening between is more efficient. Nobody likes the feeling of being trapped.

4. Have seating, people need to chill

I was super happy when we bought a ton of comfortable chairs. They have slight back support and are great for sitting down, relaxing, and enjoying games. Being on your feet all day means comfort creates great associations. People will remember your game better if they were comfortable playing it.

I'm sure a ton of devs will object. Many try to shove controllers to potential players. Fact is, if your booth is approachable, people will want to try your game(s). We love making automated demos that "run themselves". In idle mode, the screen will just have a trailer running on loop with a friendly "press any button to start" message. You come on up, and start playing. If the station goes idle again, the trailer will start playing.

In SpeedRunners, we don't even have a trailer -- rather player control gets taken over by bots.

The best games speak for themselves.

We try to passively observe what players are trying to do, and help only if they have trouble. Most of the time people just want to chat after playing the demo. Don't make anyone feel obligate to play the game because you're trying to explain how it works.

Plus you'll also get more time to be at the booth.

6. Have an activity, a showstopper

For two PAXes in a row, we have a Punching Arcade Machine where people come up and try to win free swag (if they hit hard enough). By basic calculations we had over 15,000 people try it out at PAX East 2016. People love activities.

Before that, we'd have things like scavenger hunts to collect cards and exchange them for a free game. We had quizzes running on iPads that'd get you free games if you answer everything correctly. You'd have to actually play each demo in the booth to obtain the knowledge.

Activities are what make you memorable.

At PAX East 2016 we put up a large screen with SpeedRunners running on it, and flew out the best player in North America. We'd have a sign saying "beat this guy, get $1k", and tons of people lined up to try.

My heart skipped a few beats during close-call moments, but also the booth exploded with emotion. You really want everyone to feel welcome, involved, and have all these awesome things going on that people will remember and talk about.

7. Work on your branding.

Please don't do plain logos on black backgrounds if you're not going to illuminate the logos on hanging signs -- nobody will notice that.

You need to have strong branding. Think of a shape and color, and then stick with it. People recognize shapes that are easy to remember. Think of an X-Wing. Mickey Mouse. Angry Birds. You instantly see a shape pop in your head.

When it comes to conventions, having generic booths never works. Nor does having boring colors and nothing memorable.

8. Be prepared to test your stamina and nerves.

It's easy to underestimate the amount of work that goes into exhibiting at shows. Here's what you get into (assuming you're on an indie budget):

For reference, here are all the previous PAXes we did: 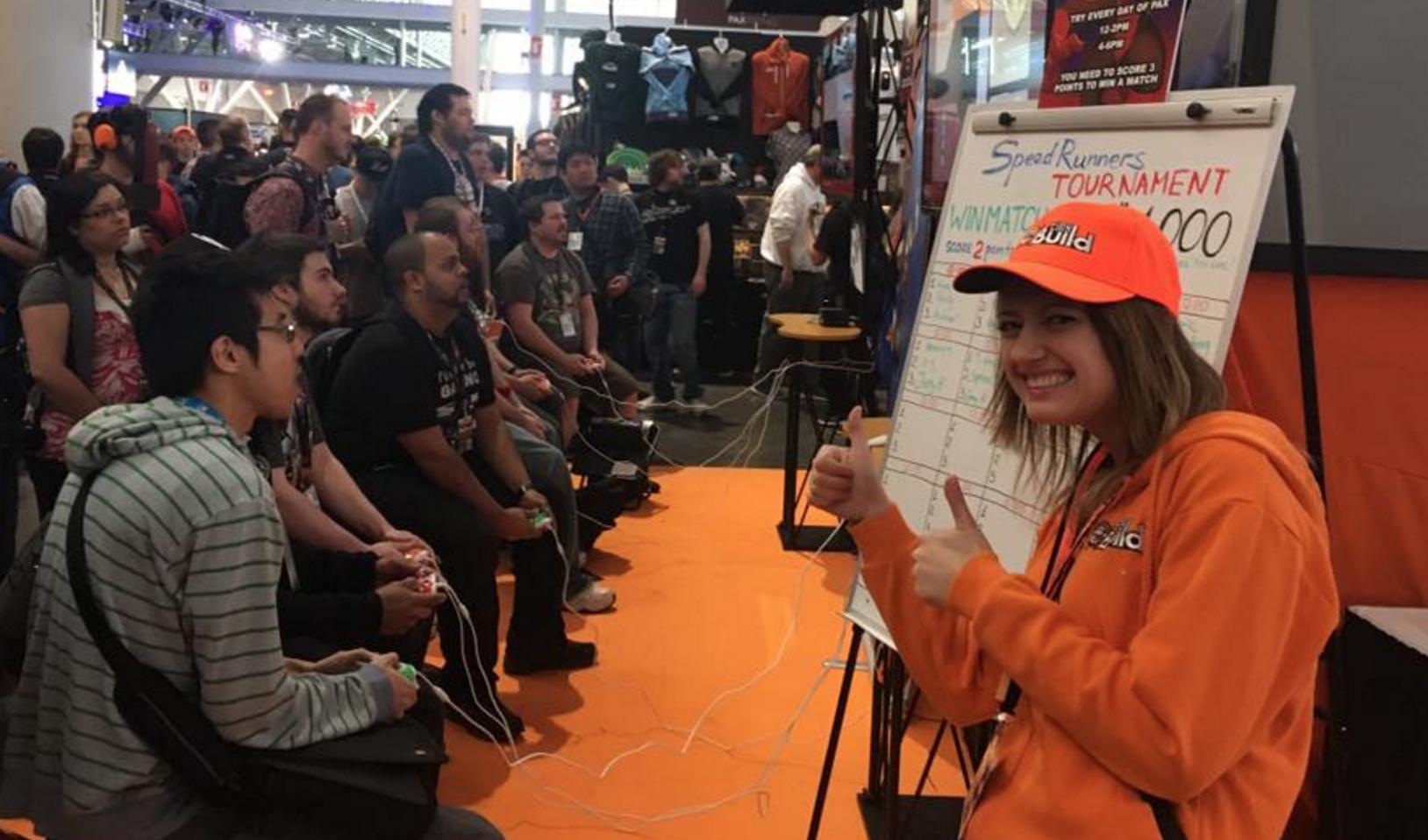 Don't try to copy what everyone else is doing. You'll see a ton of bad examples. You have to realize that most of us can't compete with AAA budgets, so we need to outinnovate. Yes, this does mean spending all day trying to figure out the layout. Yes, it does mean flying in early and preparing. And no, this isn't something you can figure out last-minute, it takes preparation. No matter what, the best solution will still involve last-minute truck rentals to get something together, and then not sleeping all night testing builds -- but without prior preparation and thought, the chance of success is very slim.

What we do an conventions takes an extraordinary amount of effort, I hope this article helps some developers make the best out of these events.