Must Have Monetization Mechanics for Match3 Based on Newzoo’s chart of the most common reasons for whales’ payments in the U.S., I have created a short list of mechanics for Match3. So, in this article, I’m going to discuss what mechanics should be included in Match3 games to increase monetization.

I will not focus on AERM and KPI-management as I know that all of you are professionals who do not create features just for the sake of it. I’m sure that you develop a feature set based on target KPIs. Today, we will consider the latter ‘M’ in the abbreviation AERM, that is, Monetization for Match3 projects.

So, according to the report, which, by the way, corresponds to my own findings, the top three reasons for whales’ payments are:

Let’s consider each of these points individually.

In Match3, there are several mechanics that allow to feel competitiveness both in meta and core components.

Friends’ Progress on the Map

You simply need to visualize the progress of friends on the map to get minimum competitiveness. This practice has long been used in a variety of genres and is considered mandatory not only for casual games. In order to add such a mechanic, just embed the userpics of friends in the interface. You can get the list of friends from a social network and then take the progress from your backend.

It’s especially great if you update the progress in real time so that the user can see his or her friend moving on the map to the goal. 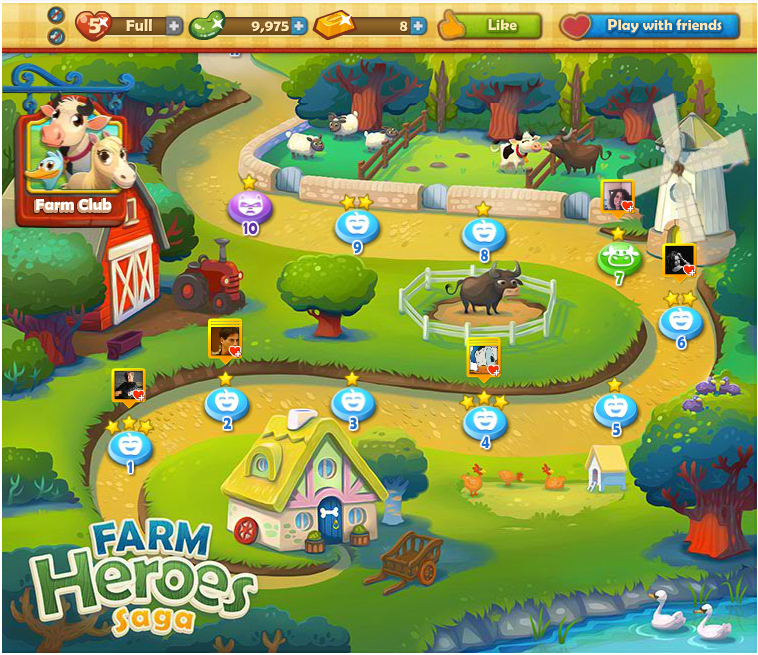 Of course, you cannot succeed without them. Before and after a level, in the window of goals, it is necessary to display the list of friends who have already completed this level. The player can compare their scores with those of friends to complete a level with power-ups and achieve the best results.

You need to remember that the leaderboard is a competitive mechanic. Some developers tend to introduce social components in it by adding features like ‘send a life.’ In my opinion, this is a mistake. The player competes with friends, and the feature of helping friends contradicts the very nature of competition. The game turns into a giveaway. According to my findings, this approach greatly reduces the value of the leaderboard, as well as the mechanic in general, and the use rates of the point of sending lives are even worse than those of the message box and sending lives during the first session.

King of the Hill

There should be bonuses for overtaking other players and for getting the first place in the leaderboard. Such bonuses are purely symbolic, and the player gets nothing tangible. However, through the interface, the player gets extra attention, which is important for the target audience. It is also possible to add the button “share” to allow the players post their results on social network timelines.

This is my favorite Match3 mechanic of competition. We show the userpics of friends directly in the progress bar to contrast their results to the current results of the player. A successful implementation of this feature is found in Indie Cat.

In this case, the player is influenced by several powerful factors: competition in real-time and desire to win. The player wants to be the best here and now, so he or she does not wait for the second attempt to be the best and uses power-ups immediately.

To make the players purchase locked content, it is necessary to present it effectively. A new location can be covered with a cloud so that the player could have a glimpse of it. It is also possible to show some special moments of the game in new locations (Harvest Swap). The player must clearly understand that in a new location, he or she will find new obstacles and their combinations with the previous ones. Even the icons of levels should have special marks for each of the types of levels.

Everyone knows this common mechanic: wait for 2 days or pay to play right now. There is an alternative: bring 3 new players through social mechanics to play.
This mechanic has a number of implementation nuances. The first locker should have purely tutorial characteristics. Its timer should be shorter, for example, 10 minutes. After the timer expires, the player gets a push notification. Lockers should be placed far enough in a game where only already engaged, activated players can get. Lockers at the early stages will inevitably affect statistics and increase user attrition.

There are many ways to implement the mechanic of lockers. The most popular way is “timer-payment-friends” that can be found in King’s games. The second most popular way is the lock mechanic based on the amount of stars got in the previous levels. That is, the player must collect not less than N stars to pass on, but to get the desired amount, the player will have to pay.

There are other options, for example, getting keys from other meta-mechanics. But I would prefer not to judge how well they perform.

This is the main reason for payment in most genres, not only in Match3. We can talk much about the concept of the Match3 mechanic, but the most important things are:

This is an example of 3 scenarios from my report on GetApp Kiev (Watch video).

This is a typical Match3 level consisting of 20 moves, with its goal being translated into percentage. For example, you need to collect 20 red elements.

The blue scenario is an easy, passable level. With the first 5-6 moves, the player gets more than 50% of the goal (matches 10+ red elements). Then there are no red matches for a few moves. Then the player matches some elements again and completes the level with several unused moves.
This level creates a feeling that playing the game is like shooting fish in a barrel.

The green scenario is more difficult. The player moves to the goal slowly and matches the last red element only with the last move.
This level’s emotion is “Fuck Yeah.”

The red scenario is my favorite. It is most effective for conversion. With the first 5 moves, the player gets minimum progress. Then, during most of the game, there is no progress at all. Red elements simply do not match. When the player has 2-3 moves left, a “miracle” occurs. The entire board explodes with bright cascades. The player thinks, “Oh, I’m lucky” or “Finally.” One match is still needed to win, but there are no more moves.
If we make the player lose 2-3 times (by allowing to get no more than 60% of the level progress), in the red scenario, he or she will pay for the extra moves.
This level’s emotion is “I’m lucky!”

Good Engine as a Feature )

In order to be able to create cascades, control filling up, and, most importantly, monitor the dynamics of achieving a goal, we need a well-developed Match3 engine that will make our game interesting.
I do not think that I will surprise anyone with this fact, but smart Match3 engines have been already used for a long time by top Match3 studios.

Other Things to Consider

As you see, in one way or another, top casual games, including Match3, feature other mechanics that increase conversion. Timers that the player wants to skip, mini-tournaments, and gambling mechanics in the metagame are also necessary, but they have less impact on your KPIs.

The findings are based on Newzoo’s report, which contains a wealth of other great facts. Download the report direct from my blog, without subscribing to Newzoo or sending SMS.

P.S. The screenshot features top reasons for payment in games like Hearthstone. If anyone has a reasonable feature set for such battlers, please share the links to your sources in the comments. I will be glad to read them.