What happens to small devs when Xbox Live gets hacked? We found out the hard way.


We all know that Xbox Live and PSN were down for pretty much everyone on Christmas day, and much of the day after. It affected millions of subscribers, as hacker group Lizard Squad claimed responsibility, hoping to highlight insecurities in Microsoft and Sony's respective services, they say.

Less discussed, perhaps, is the effect something like this has on small developers who depend on that service for downloads and users -- especially as regards top lists and getting featured, which are the main drivers of users to our content. With the big studios, an outage like this is a blip on the radar. But for smaller companies like mine, the outage meant a total halt to the only progress we had made in terms of attracting users in the last month. You see, the outage not only affected Xbox Live and PSN, but also the Windows Phone store, where we had just started to see some positive progress for our new-ish free title. I'll explain in detail.

We released our game Gunhouse for Windows Phone on the 27th of October. We released it completely for free, with no ads or monetization. We had gone through a now-defunct program called Appcampus, which paid much of our dev cost to bring an enhanced version of the game to Windows Phone (which was previously released on PlayStation Mobile). We decided that, since our costs and needs were met, we should release the game for free, because the best thing we could do would be to get a high number of downloads, hopefully impress Microsoft, and then maybe have something to show them if more funding opportunities arose. Plus, this way lots of people get to play it!

Immediately after launch we were in pretty good shape, because we got featured in part of the store, and we also hit the "new and rising" list, because our reviews were universally good. But we hit a snag soon thereafter - we hadn't gone through the proper Appcampus QA process, just doing QA ourselves, so we had to hide the game from the store while we took care of all that. This was my own fault for not reading the documentation carefully enough, but we're a still pretty young developer, and mistakes like this do happen! We went from averaging around 600 per day to sub-tens of downloads when we hid the game on the 11th of November.

Once we got back on the store, around the 24th of November, we were pretty much dead in the water. Featured nowhere, not on any lists. We got as many downloads per day as when we were hidden on the store (not sure how that's possible, but there it is!), averaging around 9 downloads per day. Keep in mind, most companies are used to massively more downloads than us even at our peak, but as a small company with no marketing budget, 600 per day was looking really good.

We managed to get a US store feature on the 15th and 16th of December, but it was just a small blip, and we were back to nowheresville. I was worried we would not get a second chance.

Surprisingly though, on the 23rd of December, that second chance came -- we got highlighted by Windows Central, which focuses on games for Windows devices, including Windows Phone. They wrote a small feature about Gunhouse being free, and suddenly we were on a positive trajectory again. We averaged 3,000 downloads per day for the next two days, and trends were looking up. If we could ride that wave and turn it into a longer term thing by getting others to write about it, I thought we might be able to get back on one of the proper lists on the WP store.

Then came December 25th, and all Microsoft store services were taken down. We went from 3,230 downloads on the 24th to absolute zero on the 25th. Our upward trend was stopped completely, for the second time, and our second chance was shattered. We're no longer new, we're no longer "rising," and we don't have enough reviews to get into the "top reviewed," even though our review average is very highÂ (they took a hit with the attack too though, we'll get to that).

We also know that most large game web sites are not very mobile-oriented, so generating press for what is now a two-month-old free game on Windows Phone is a big challenge. This chart illustrates our progress, or lack thereof, throughout the title's two-month life. 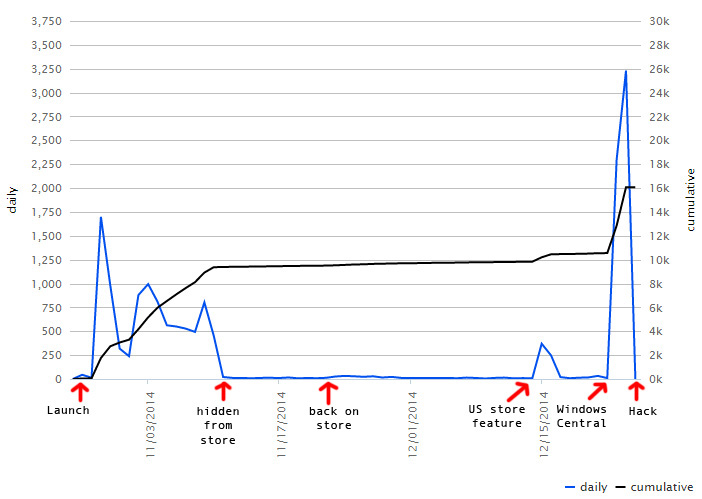 Essentially, our progress has been completely halted by the service takedown. We might have been able to capitalize on this upward trend, but now it's gone. Our review average also took a hit - we got more than a few one-star reviews because the servers were taken down right as some people downloaded the game. Potential players downloaded the game, the servers went down, and suddenly nothing showed up in their list - some people even told us they reformatted their phones, to no avail!

The lists we might have been able to get into are going to register our upward progress as a blip now, instead of a trend. We're going to try to keep pushing this game, but there's only so much we can do. We released this game for free as an experiment to try to get in good with Microsoft, but through our own initial error, and a hacking takedown of our second big chance, it's looking like this experiment might be a failure. But it could have been so much worse, and probably was for other developers. Imagine if we hadn't had our development funded, as is the case for most indies. Imagine if our livelihood depended on this game doing well, and attracting a large userbase. There are a lot of companies that couldn't survive that sort of setback.

Ultimately, on the indie developer side, this is the result of an attack like this on Sony and Microsoft's live services. Small developers get left in the lurch, and for some of them that can be disastrous. If the only point of this attack was to point out security flaws, I don't think it was worth the cost.