How to give a really great GDC talk


The Game Developer's Conference starts in less than 2 months. It is so close that I am already planning out when I am going to my barber so I look sharp but don’t have that first-day-of-school-I-just-got-a-haircut look.

How people shop for your game

What to write so people buy 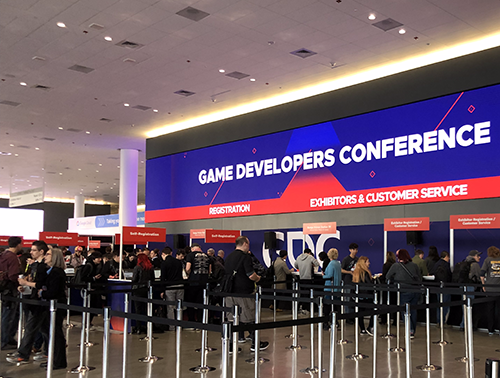 Back in March 2019 I gave the biggest talk of my career at the Game Developers Conference. It was all about email marketing. You can watch it here.

I thought it went well just judging by crowd reactions. I had no idea...

When I received the feedback report I was shocked to discover it was the highest-rated talk among the entire GDC 2019 summit!

Several people suggested I do a GDC talk about how to do a GDC talk. I am not ready to do that. Instead, here is a brain dump of some rules I use when writing and giving my talk. If any of this doesn’t make sense just ask me.

If you have a talk in GDC 2020 congrats! I can’t wait to watch it and meet you. If you didn’t get accepted to GDC this year but want to give a talk, this will hopefully help too (see the section at the bottom for tips on getting in)

Here are my tips.

My talk was ranked #1 by the attendees. But that is in no way an indication that it was the best talk. Here are some disclaimers to put this in context.

I am a white cis man. We have been the voice of authority for so long that people are just used to, and are comfortable with, us talking. I am absolutely sure that women and POC speakers got fewer positive votes and more nasty comments just because of who they are. I am sure systemic sexism and racism wrongly affects the ratings of non-white male speakers because of the sound of their voice, because they “seem” to be unsure of themselves, or a million other tiny shitty reasons. Before we begin I want to signal boost some awesome talks that I saw at GDC 2019 that deserve to be ranked just as high as mine:

Bonus: Victoria also wrote up a great article about how to beat your fears and give a talk

Second disclaimer: These are just the rules I live by when I give my talks.

I am not saying that if you don’t follow these you can’t give a good talk. There are many great speakers who have a completely different style from me. All I am trying to say is that these are the rules I follow when I write and give my talks. Also my topic was an informative talk (meaning I was trying to teach something.) Advocacy talks have a totally different tone and goal. Not all of these tips will apply for other types of talks. But at least some could.

Third disclaimer: I had the last slot of the day with a boring title like “Email Marketing.”

The only people who would attend a talk like that had to be business-minded and anyone who would have hated my talk probably decided to go to dinner instead. Several other GDC talks earlier in the day were more general interest and better attended. That means my audience was more tuned in and more likely to give me a high rating. 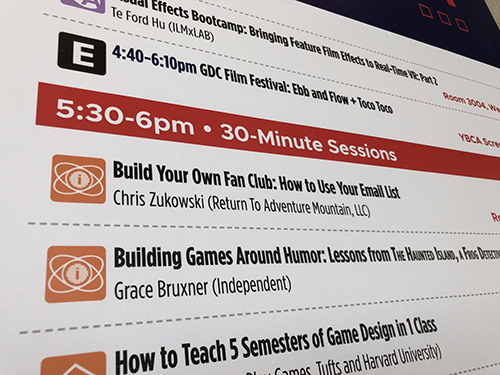 Fun fact: Grace Bruxner's great talk was at the exact same time as mine and both our talks were about "building." The GDC schedulers were like eh... this is building hour.

How I write my talk

Hey this is the line in front of my talk. It is really cool to see.

Preparing for my talk 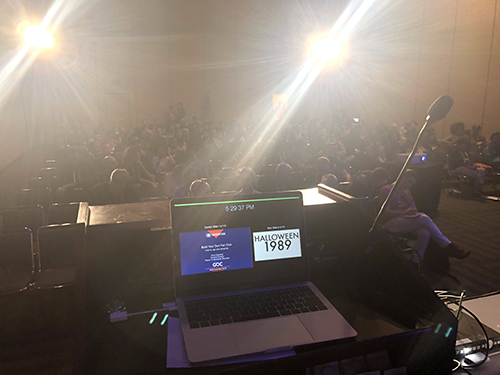 This is what it looks like 23 seconds before your talk starts. From the speaker's point of view it seems like we are giving a talk to glowing hair. 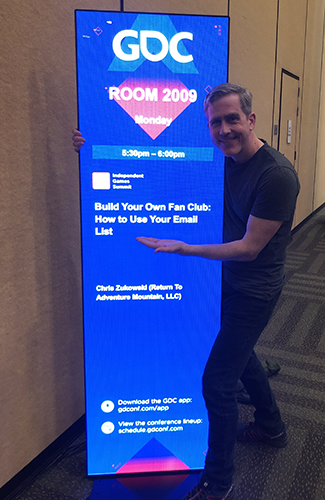 Additional insider tip: they let you hug the signs when you are a speaker.

Secret tip section - How to get a GDC talk

That is all I got. Speaking is really fun. It doesn’t sell games but it opens doors with people who have a lot of influence in the game’s industry. Those folks can help you sell your game.

Again, let me know if you have any questions.

This blog originally appeared in my secret newsletter that I publish every week. If you like this and want to get stuff like this before anyone else, subscribe here