This Postmortem was published about a year ago on Tigsource. Since I still get lots of mails from people who want to learn more of Psych's way to the top I decided it's not too late to post it on Gamasutra. I hope you enjoy the read.

In late December 2014 I released the game on the Play Store without doing any marketing. I just told my friends and family that it’s available and they could play it which they did a lot during the Christmas holidays. I got lot of very valuable feedback from them and they even found some critical bugs that I could sort out pretty quickly.

After that I started with marketing the Android version. I sent out a press release to every Android related page I found. I got some nice articles about the game but nothing that would drastically increase downloads.

In the meantime I started working on the iOS version which eventually got released with end of January 2015. I took Apple about 2 weeks to review the game.

Once the game went live on the App Store I noticed that I had about 100 downloads a day. This seemed very strange to me since I did no marketing for the iOS version so how should people know that it even exists? It also wasn’t featured at that time. I still don’t know how to explain this.

A few days later I was sitting in front of the TV, regularly checking the iOS Leaderboards for new players when I noticed that in between 15 minutes I had about 1000 new users. First I was thinking that Game Center is bugging and showing wrong numbers. Another 15 mins later I had another 1000 new users so I went online to check what happened.

And there was the first mail with congratulations for the App Store Featuring. The game was featured in the category “Best New Games” in the US. However, this usually doesn’t guarantee lots of downloads. I believe that I did a good job with designing the App Icon and selecting the Store Page screenshots.

A week later Apple expanded the Featuring to 138 countries worldwide. This was great but the numbers told me that being featured worldwide (outside US) on the App Store is about a worth as being featured in the US only. In short: I had about as many downloads in the US as in the rest of the world combined.

Psych is free to play and mainly monetized via Ads. They get triggered after every game session.
For Ad services I decided to use Mopub as mediator and add lots of Ad networks such as Admob, MillenialMedia, Mobfox… Unfortunately, the only one that performs quite well is Admob. After trying out a few things I decided to deactivate the Mopub Marketplace since the ecpm is generally very low with them (about 0.9$). Admob performs at around 2$. By deactivating the Marketplace I tell Mopub to prioritize the Admob service. This comes with the downside that the fillrate decreased, but in the end I think it was still worth it.

For In App Purchases (IAP’s) I added the option to buy off the AD’s and 3 different arrows (player characters). They don't sell so well which was expected. However, they give players the option to spend some money on the game if they want to support me. The Ad remover is working quite well though. In total, IAP's make about 10% of the total revenue.

- Well, Psych was a big success. I didn’t expect this at all since it was my first one-man game. Its main purpose was to get into working on a game all alone, getting to know the engine, making some interesting discoveries, generally to getting better at it.

- I was working in the games industry for the past 7 years as a Game Designer. With this precondition I knew I had to make something that is very simplistic. My art and programming skills are very limited, but I know how to design interesting mechanics or systems on paper. I was able to identify my strengths, weaknesses and limitations (remember: one-man project) and work out an interesting, manageable game.

- I took a lot of time to sort out the most important questions before actually starting to develop Psych. I took a closer look at a number of different engines. Finally, I decided to stick with Construct 2, a very accessible, well documented, lightweight engine with a strong community and lots of options. I quickly jumped into Construct by working on my first prototypes. Before starting with Psych I worked on 2 other prototypes, which I decided to stop working on. Preproduction took me about as long as production itself and I am convinced that was the right the way to go. Taking as much time as needed to find something that is worth finishing.

- Working alone is wonderful. I usually worked in teams with 20-30 people and a publisher. For Psych, there was no Design Document, no management tasks, no unnecessary meetings, no endless feedback cycles, no boss to approve your work. Everything you do you do for yourself, every idea you have can be implemented if you wish, in a few hours. Hell, I never want to work in a big company again

- Psych got some awesome game dev biz media coverage on the Wired, BusinessInsider, Pocketgamer etc. However, those didn't help getting downloads. 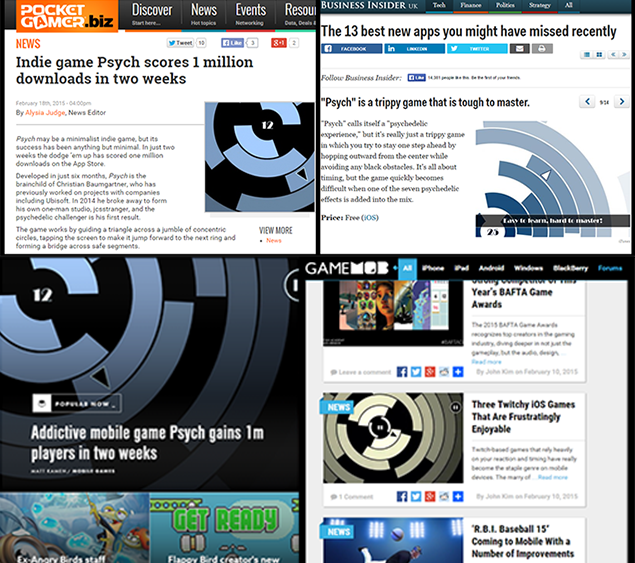 - The name Psych turned out to be a bad decision. I wanted the name to be one word. Now, that is a problem. Try finding a non-fictional word for your game that isn’t connected to something that already exists. Besides, lots of spam blockers jump on when they see something containing the word “Psych”, which is obviously a bit of a problem when trying to contact press.

- I was in negotiations with 2 medium sized publishers. With one of them I went into contract negotiations. After having the contract checked by a lawyer and sent it back for them to agree on, I didn’t hear back anymore. Note: I am not talking of a no-name publisher, so I expected a bit more professionalism here. I tried to reach them on several ways without success. In the end I had no contract but wasted a few weeks and a nice amount of money for the lawyer.

The relation to the second publisher was similarly disappointing: I told them that I am in a hurry with releasing the game since I was late already (thanks to the first publisher). So I wanted things to get done. What they responded (in short): “We usually do not collaborate with developers that make demands”. Well, **** you then.

- From a financial perspective, the game was a success too. However, there is a clear downside to this. The game is out there for about 2 months now and I already earned enough to being able to continue working on my next game. Considering the fact that the game is that successful and it would be naive to expect every game I develop to be this successful, the money I am getting from it is not as much as I was expecting. To wrap it up: If I want a game of this size with this monetization method to be successful financially, it needs to be similarly successful as Psych.

- The gaming media response was much lower than I was expecting. While the big Android gaming pages showed interest, it was much harder to get through to the big iOS review pages like TouchArcade and AppAdvice. I reached out to them regularly without any feedback. The game was featured quite a while and I was thinking that that should be enough to get some attention. Well, I was wrong.

- Google Play didn’t seem to notice Psych at all. While it was a big success on the App Store, the ~150k Google Play downloads come mostly as side product from the App Store Featuring. Every attempt to contact them and following their guidelines failed and so it wasn’t featured anywhere on Google Play.

- Psych was a big success on the App Store
- Know your limits. Build the game towards your strenghts and weaknesses
- The only thing that really gets you downloads is being featured
- Don’t expect a publisher to be your friend
- Take time for preproduction
- Working alone is awesome
- A catchy, unique name is very important
- For being financially successful by monetizing with Ad’s you need a huge amount of players
- Once you have a successful app, you get tons of mails from people who want to get some money out of you