The Sims - Part 1: How playing with dolls can create amazing stories


Iâm going to say up front that this is coming from a pretty biased place, since I was the producer on The Sims: Ambitions for mobile. On the other hand, I would like to think that itâs coming from an informed place for that same reason, among others. Make of it what you will, as I prepare myself for a somewhat demasculinising statement.

Iâm just going to come right out and say it: I really enjoy the Sims. At first I didnât get it â where is the fun at? What are the win / lose conditions in this game? Is it even a game? But gradually Iâve started to enjoy playing with dolls, as it were, and this is what Iâve learned on my journey.

Since there is a lot of ground to cover, Iâll split my writings into two articles. In the first, Iâll focus on the Sims ability to tell stories, and how you can do that without an explicit narrative, counter-intuitive as that may seem. Iâll file this mentally under âinteractive dramaturgyâ, a field which I wish I knew more about, but sadly havenât really found excellent writings on. Readers are very welcome to point me to some.

I should also mention that I am not referring to any particular Sims title, but if you want to attribute one, you might make it Sims 3 for PC. Sims Medieval, the latest installation in the franchise, actually does away with some of the things I describe here, but thatâs a story for a different post!

For the purposes of this article specifically, I would characterize the Sims as âa space within which to create personal storiesâ. Let me explain how that is possible, through a series of statements and explanations.

Telling stories is done by using standard building blocks. What Iâm getting at is that all stories are made up of little bits, which are reused between entirely different stories. How many stories do you know that include a police officer? A car chase? An abandoned hospital in a post-apocalyptic world?

The Sims uses this to its advantage, by giving the player lots of building blocks, which in themselves are not very exciting, but in conjunction with each other become a compelling setting for an interesting story. You have characters, traits, activities, wishes, needs, objects, and so on.

With these blocks, you build something cool, like a rock star or whatever you might want. 10.000 other players might also have a rock star sim, but theirs might not be blue-haired and hyperintelligent with an interest in gardening, a habit of cross dressing and a torture chamber in their basement. As you play the game, the choices you make become part of your story, because you are free to shape it. Itâs still not a story per se, but itâs personal and weâre getting there.

The Sims universe is a space filled with storytelling dominos. Consider giving two teenagers $10.000 and dropping them off in Vegas. It becomes kind of hard to prevent a story from happening.

The Sims takes advantage of this by including characters which are somewhat autonomous, somewhat flawed, and have plenty of capacity for actions that can disturb the status quo. In other words, you have plenty of opportunity (money) in an equally opportune environment (Vegas).

You almost have to tip-toe through the game to avoid nudging a domino, which in turn will hit another, and before you know it, a story is already happening. Also, since there are not a lot of serious consequences in the game, it becomes fun and safe to be mean to people, or embarrasing yourself in public. I even think the number of Sims you control reinforces this â since you control a family, you are not your Sim, you only control it, watch it, nurse it, like a pet, or indeed, a doll.

You are not so invested in the single Sim that you canât do cruel things to it, if that happens to be the story you want to tell.
All of this can be more or less ignored, if you try hard enoughâ¦ but your brain is not about to let that happen. Which brings us toâ¦

Blank slates are anonymous, filled slates are impersonal, half-filled slates are interesting. Before going into this, itâs worth a little stroll into the psychology of storytelling. Imagine that youâre taking a walk, when beside the road you see something out of place. Letâs say two small pairs of tennis shoes hanging from a tree. Immediately your brain starts extrapolating a narrative script â you might imagine that some kids bullied two little kids by hanging up their shoes in the tree.

If you have a blank slate â a character with no stats, no goals, whose looks you define yourself, etcâ¦ that gives you complete freedom, but it doesnât really spark any immediate interest. Itâs about as exciting as a blank sheet of paper and a pen â anything is possible, but you do all the work.

If you have a full slate â a character with a long bio, stats set in stone, clear goals, very defined looks, etcâ¦ this gives you a strong sense of direction, but no freedom. The actions of such a character might be interesting, like in a movie (which you do not control), but there isnât a lot of room to invest yourself by shaping the character and itâs actions, goals, etc. Even if you were given control over that characterâs course of action, it would become unnatural when you went against the characterâs own wishes, substituting them with your own.

The sims gives you a half-way solution. You have some templates to choose from that you can modify, and you can roll random values for your character. Itâs made very easy to select a few, defining traits, which even a casual player will have no trouble remembering and associating with their new character. This forms a starting point.

With that starting point you have a basis on which to make decisions, like, should my character value fancy dÃ©cor over extravagant meals? Does my character take carreer seriously, or is that just a necessary evil to have fun? What does my character even want out of life? From a simple set of properties, you can extrapolate up to the highest philosophical questions. Itâs not about finding the path through the narrative âmazeâ, itâs about finding a path â and a little inspiration goes a long way. Returning to my psychological summation, you are given some hints at a character, and your mind automatically starts explaining itâs actions, motivations, etceteraâ¦ until finally it has a life of itâs own.

This relates to my last point in this round. 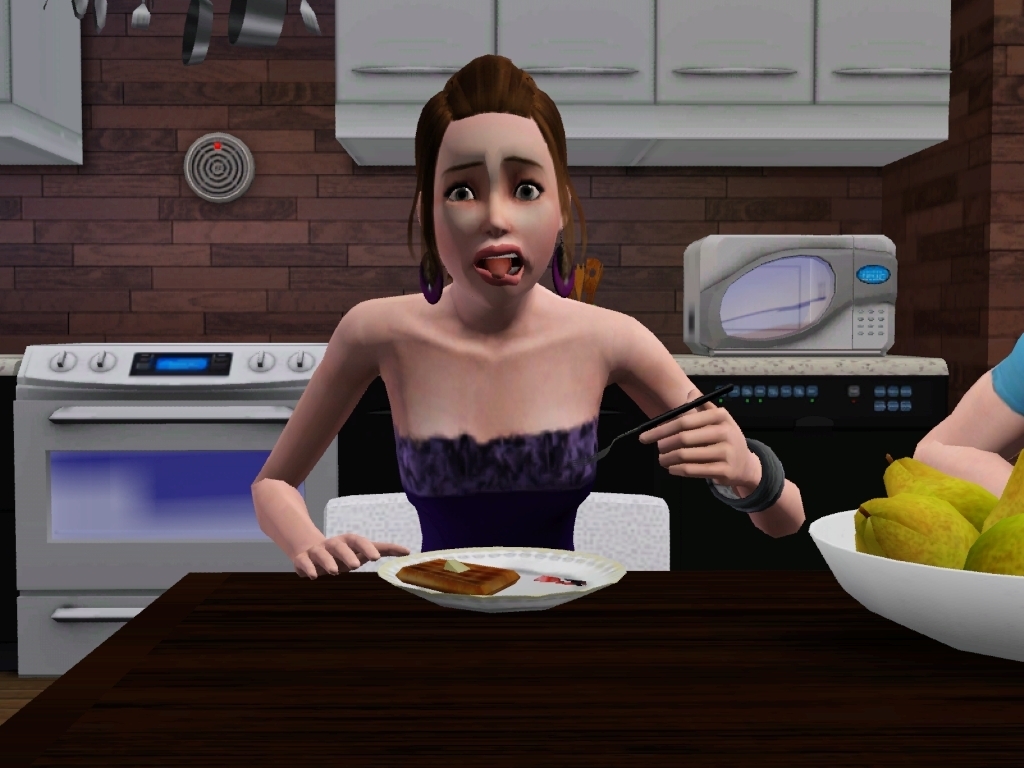 Investing effort in something imbues it with meaning. At first, the characters in the sims universe are strangers, with no personal traits to speak of. âThey all look the sameâ, as you may have heard someone speak of a certain category of real people, be it asians, bankers or punkers. But as you spend time with them, Sims included, two things happen.

Firstly, you discover that they really arenât all the same, and that despite obvious similarities, they also have a lot of less obvious differences. They might be subtle, but they are there. In the Sims, this is represented by discovering traits in others, such as âinsomniacâ, âevilâ, or âreally bad at parking carsâ, and from these small cues, you start to extrapolate much more complicated characters and stories. This happens in your mind, not explicitly in cut-scenes and the like, as described above.

Secondly, as you invest time with these people or characters, they start to mean more to you specifically. Itâs not a story or something like that which you can necessarily put into words. This is the same process which causes wonderful things like nostalgia and the sentimental value of an otherwise worthless object.

I canât tell you precisely why this happens â maybe itâs because we are reminded of past events when we see the object of nostalgic value, or maybe itâs because we need the many hours spent with said object to mean something, in order to justify spending that time in the first placeâ¦ but it certainly does happen, and Sims are no exception.

When youâve spent a hundred hours in the virtual company of âSusanâ, it doesnât matter that she is made up of 10kb of data and some very simple AI routines, because you yourself have put so much more content into that character than the developer could ever hope to.

The Sims excels at this, because it is made up entirely of character-related experiences. I personally think that the Sims could do with more in-game âsouvenirsâ, because what are souvenirs if not nostalgic amplifiers?

To drive this home â there are forums, entire communities out there, which simply exist to tell the stories of their Sims characters, and itâs amazing how much depth these stories can have, telling stories of personal drama spanning several generations.

On the character side, I have had players, even QA testers, insist to me that this or that sim is capable of behaviour like racism, thoughtfulness, or simple stuff like littering more than the average sim â stuff which I know for a fact is not part of the code base. It goes to show how these little clumps of pixels (and if youâve played the Sims on mobile, they really arenât much more than that) can be imbued with so much life, by even the most detached player. The mind really is an amazing thing, and by understanding it and designing for it, we can let players apply their minds to tell stories for us.

Before this gets too long to read, Iâll end it here, and continue in another article, which will go into why the Sims universe is fun, and how the design is specifically tailored to a fun experience. So long!