I was ten when I first sat down to play Metroid Prime. I remember finding it difficult, and opaque. Samus' struggles were unfamiliar to me, and, I guess, in most ways, they still are. My stepfather and I both had problems with the game. I was more interested in reading the lore than fighting enemies, and even though I guess he thought of it as a sort of bonding activity, he wasn't very good at the game and I wasn't very good at watching him be not very good at the game. At least he tried.I won't even go into our struggles with Metroid Prime 2.

Eleven years later, I still can't identify with Samus' journey through the ruins of Tallon IV. Not much. But for some reason, the game had a huge, lasting effect on me. It took me a long time to put a pin in what it was that gave Metroid Prime such appeal. The monster designs weren't the most interesting; interesting, yes, but not groundbreaking or spectacular. Combat design was good, occasionally verging on great, with a few standout moments. I doubt anyone who's played through the game will ever forget the sweat-drenched moments after you acquire the Thermal Visor: pitched into darkness, you're expected to use this new visual interface immediately and it's a terrifying experience. Other than that, though, there's not much that's unexpected, at least from a modern viewpoint. 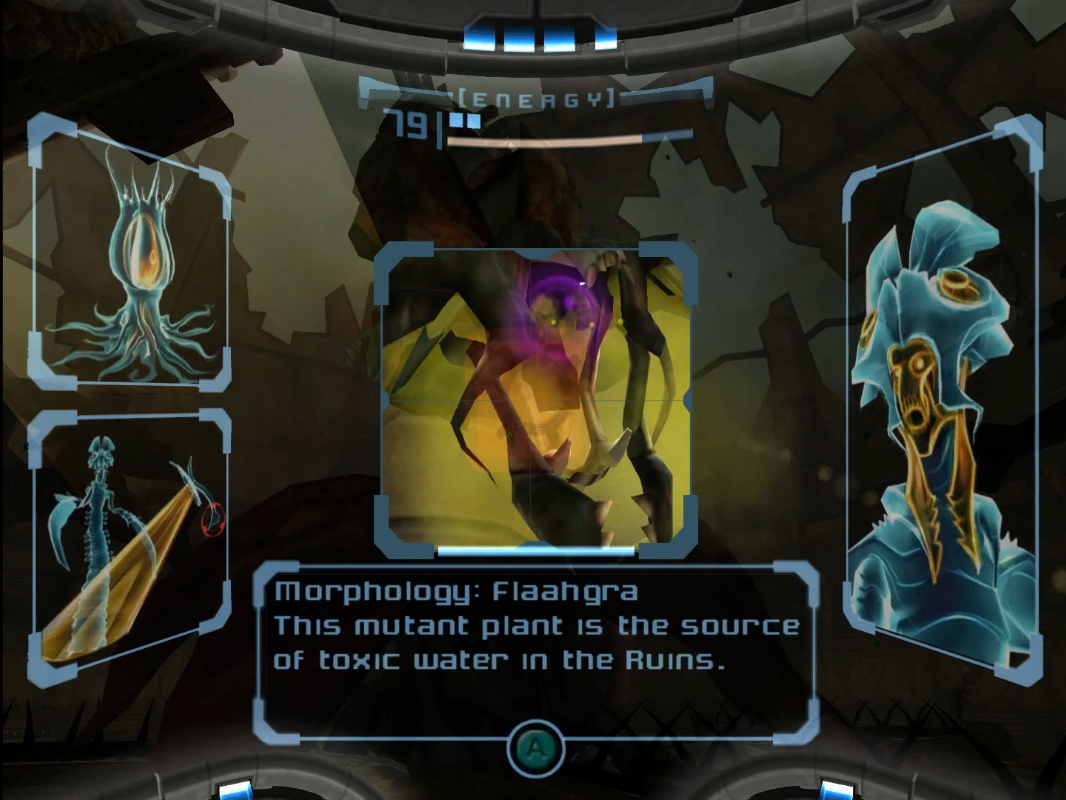 Metroid Prime is important to me not because the combat is great, or the monsters are cool, or because Samus is undoubtedly a badass, pioneering female protagonist. It's important because it was the first game I ever played - a game from 2002! - that gave me the idea that the world had existed before I stepped out of my spaceship. Lore bits on physiology of mutated creatures, or the lichen covering the wall, accessed through an augmented-reality scan visor, taught me that environment design is more than skin deep: it's a truly integral part of game design that Retro Studios iterated and perfected on. No game since has matched it.

I've been playing Dragon Age: Inquisition recently. It's my second playthrough. This time, I'm spending a little more time reading the codexes and appreciating the environmental storytelling. You can tell that the writers really, really wanted to make the world feel lived-in, to make it feel like there's a huge world outside of the playable areas with noble intrigue, monsters, magic, wars, that sort of shit. But instead of feeling like a small cog in a big machine, the Inquisitor just feels like she's a creature slightly detached from the world. She's going to save the world, and no number of Game Over screens are going to stop her. The world outside of her bubble of plot shielding can't affect her. The Emerald Graves will always be green, and there will always be dead elves buried there. The world doesn't change. I suppose that's where Inquisition falls down. Too many cooks, or something like that. Lots of words and skulls next to toilets, but nothing in the world changes.

To contrast, Metroid Prime is limited, relatively, in its approach to player choice. The narrative follows a single track, with no branches or twists. It succeeds, though, in making the player feel like she's making a concrete impression on the world, and that the world will continue existing and twisting whether or not she's there. One example, early in the game, is that of the Flaahgra boss and the Sunchamber from which it poisons the surrounding ruins. Before you encounter it, all of the water you find is rank, poisoned, murky. You've no reason to believe that there's any reason why it wouldn't be like that, but the game soon reveals that there's a source of the poison, and once you defeat it, not only is the Arboretum arena cleansed, but the entire surrounding area is swept free of the poison. It's a spectacular way of offering the illusion of player agency, and it's something the Metroid series has excelled in, especially in the period of time when Metroid Fusion and the Metroid Prime series were released.

But wait, there's more: not only does the Sunchamber battle show the player that she can have a concrete, lasting effect on the world around her, it's also a macrocosm of the game's premise! The titular creature, the Metroid Prime, is poisoning the entire planet, and your quest is to clear that poison away. It's similar to Dragon Age and, I'm sure, a bunch of other RPGs, in that you've got to save the world. What better way to motivate the player than show them that they can do it on a smaller scale first? What it achieves in a spectacular fashion, though, is giving the player the impression of progress, and, honestly, that's where Inquisition fails. You've got to close a big rift in the sky! Hooray, you've closed the rift. Does it change anything in the world? No. You've still got demons popping in at random, you've still got a bunch of people to maim in a bunch of creative ways. The playable world doesn't change one jot, and apart from a few bridge-building operations, the player's actions don't have any tangible effect on the playable area. All of the Big Changes happen off-set, and that's disappointing.

As game makers, this is something we should pay attention to. As world builders, this is something we need to learn from. Games can be about escapism, about having power, about having some sort of agency over our fictional lives and surroundings. So many games - especially open world RPGs - forget this. We can pick up swords with bigger numbers attached to them, but we can't watch the climate change as a result of our actions, we can't watch the world's subtle shifts as we affect it in tiny ways. Modern AAA games have become fixated in their design on the inconsequential minutiae of destruction physics, shiny swords, and the irrelevant details of what some noble you'll never meet had for breakfast. Let's, as game makers, world builders, and storytellers, give our players some real agency, let them really change the world. Sometimes the subtle changes in the world can be the biggest ones.