Videogame Classics - Anarchy in the Nippon 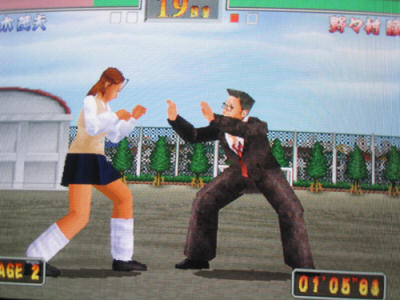 Right now you're probably wondering just what this game is. Certainly looks interesting, but what the heck is it? It's name is Goiken Muyou: Anarchy in the Nippon. You've almost certainly never heard of it before, but this may be the best polygon fighter ever made for the Sega Saturn.

The behind-the-scenes story, according to Segagaga Domain, goes something like this: after Sega completed the excellent Saturn conversion of Virtua Fighter 2, a number of AM2 programmers wanted to immediately follow up with another fighting game. Sega declined, for unknown reasons, perhaps because they didn't want to take any attention away from VF2, which quickly gave Saturn a second chance at life.

Eventually, four members of the AM2 team broke away and started their own little group to make their dream game. The end result was Anarchy in the Nippon, published by KSS in 1997.

The title is very appropriate, actually. This plays out more like a punkish tribute/parody to the Virtua Fighter series. These guys were clearly great fans, and they imbued their game with a breezy irreverence and loose humor. In terms of the gameplay, it's Virtua Fighter down to its core; there's a lot of Virtua Fighter 3 in the mix, like the use of a dodge button (VF3 was in arcades at this time). But it's also a little like Tekken, with its fast, breezy action and open-ground environments. Only one rooftop stage features a small fence at the perimeter, and I've yet to discover if one can be knocked off the roof. Aside from that, no ring-outs.

Fighting games have long since settled on a rigid, archetypal character list, nearly always copying one another. This is one of those punk traits in Anarchy - the game characters look just like ordinary people off the street. You can see them from the screenshots, and it's a pretty goofy mix. Most have a street-edge quality to them, like a skatepunk kid and the different girls. The favorites, of course, will include a middle-aged woman who dresses in outrageous colorsÂ while fighting the ballet, and a middle-aged salaryman, whose moves include spinning, running, fainting, and - I swear I'm not making this up -Â scurrying underÂ an opponent's legs and poking them in the butt.

The best inclusion - and this is where you really have to be a VF nut - are four real-life VF tournament players. I did a double take when I recognized the name Bun Bun Maru, and likewise with the other three, who are named after the VF fighters they specialized in. How's that for a kick?Â As I understand it,Â these four likewise had a hand in the game's design, since it's so damned precise and smooth.Â  This no doubt accounts for Anarchy's "fan tribute" spirit.

It's also a great tribute to this game that the VF pros each inhabit their own fighting styles. No Mortal Kombat palette swaps in sight, thank goodness. I don't know if this game was ever a hit in Japan, but you'd expect them to brag about it for a long time.Â

If there ever was a game that deserves to be called "Virtua Fighter Remix," it's this one. This isn't to say that all of the moves are cut and pasted from Sega; instead, it's the feel of the original that has been planted, the style of Jacky and Wolf and Akira and Shun-Di. A lot of familiar moves, and a lot of different moves, but not without any sense of seriousness or gravity. There isn't the burden of upholding the tradition of Sega's most profitable arcade franchise. It's all fun and games, like hearing your favorite band make noise in a basement dive just for kicks.

Visually, Anarchy is a fantastic game. Large characters, 60fps, terrific texture and color, impressive environments, and all displayed in Saturn's glorious hi-res mode - sharper resolution than the Sega Dreamcast. It's clearlyÂ the equal toÂ Virtua Fighter 2, which has always been the benchmark of what Saturn could do. Interesting, isn't it, that Sega never really could match that achievement, not with Fighting Vipers, nor with Fighters Megamix. I'd say Last Bronx comes closest, and may actually surpass VF2 with its brilliant use of faking a 3D environment. But I haven't spent enough time with that one yet, and it came near the end of Saturn's life here in America. Perhaps Anarchy would have met the same fate.

So I think, in terms of the graphics, Anarchy in the Nippon is the best 3D brawler for the Saturn. In terms of the gameplay, it's easily the match of any of 'em. I might like this one a bit more when in the right mood, if just because of its irreverence and that office worker guy.

Gameplay modes are tricky to figure out, because nearly all the text is in Japanese (kanji), but in addition to the one- and two-player modes, there's the team battle, a watch mode, a practice mode (complete with moves list), and a character-create mode where you pick one of the fighters, assemble your own stats, and put 'em in action. It's just like the famed Kumite mode from VF4 - perhaps these programmers returned to Sega in the end?

How obscure is Anarchy in the Nippon? Other than Segagaga Domain - a godsend for any Saturn fan - I found a review on one other site, in French. That's it. I do see that KSS published a sequel for the Playstation 2, but I know absolutely nothing about it. The box art on the back suggests that the sequel takes itself more seriously, and maybe it's meant to be a fighting game to stand on its own, instead of the Husker Du tribute the original is. I guess someone will just have to import the damned thing and find out.

So here you go - another one of the great "lost" Saturn classics that deserves a place alongside Radiant Silvergun, Soukyugurentai, Grandia, Princess Crown, Deep Fear,Â Cotton Boomerang,Â all the 2D brawlers likeÂ Street Fighter Zero 3...yadda yadda.Â Â  You have to wonder what would have happened if kids wandering the American malls in 1997 walked into the game store...and saw this.