Complexity Will Not Save the Music Genre


Long before Guitar Hero, Harmonix founder and lead developer Alex Rigopulos had a vision -- to bring the joy of music making to the masses. In the late 1990s, he and co-founder Eran Egozy were studying music education at the MIT Media Lab, when they discovered something that would eventually lead to one of the most successful video game franchises in history â that creating music was a fundamental human experience, but few people had the time or patience to master an instrument. In a 2004 interview, Rigopulos said,

Playing music is, I think, one of the most fundamentally joyful experiences that life has to offer. Just about everyone tries at some point in their life to learn to play music: piano lessons as a kid, guitar lessons as a teenager, or whatever. The overwhelming majority of people give it up after six months or a year in frustration, just because it's too difficult to learn to play music the old-fashioned way.

When Rigopulos and Egozy founded Harmonix, they made several games that garnered wide industry praise, such as Frequency and Amplitude. However, none of these early games was as successful as they had hoped.Â  Then along came toy importer Red Octane. They wanted to bring a widely successful Japanese rhythm game called Guitar Freaks to the US so that they could import and sell the plastic guitar controllers.

The problem was that Guitar Freaks was too Japanese. Founders Kai Huang and Charles Huang turned to Harmonix to develop Guitar Hero as a way to promote the sale of the controllers. Neither Harmonix nor Red Octane envisioned how successful Guitar Hero would become. Several years later, when Huang reflected on the key to the gameâs success, he said,

When you look at how easy it is for rock fans or consumers to get into the Guitar Hero game, almost anybody can, whether you're five years old or 65 years old. Everybody can pick up the guitar, everybody knows what it is, and they can have a great time playing the game almost immediately.

Since then, the marketplace has been inundated with new rhythm games. Last year, I wrote an article titled Too Much of a Good Thing: Explaining the decline of Guitar Hero and Rock Band explaining why the release rate of new music games was unsustainable. My advice at the time was to reduce the number of titles and to increase the time between releases. That advice went unheeded and, as a result, the genre has continued to decline.

More recently, we have seen companies trying to rekindle interest in the genre by introducing new levels of complexity.Â  Rock Band 3 is one such game. It introduces a new keyboard controller, not unlike Nintendoâs defunct âMiracle Pianoâ (See below) and a new âpro levelâ guitar controller. In his review of Rock Band 3, CNetâs Dan Ackerman writes,

This version has six fixed string-like sensors in place of the traditional strum bar, and replaces the five colored fret buttons with separate tiny buttons for each string at every fret on the guitar neck. That's 17 frets across six strings, more than 100 independent buttons. 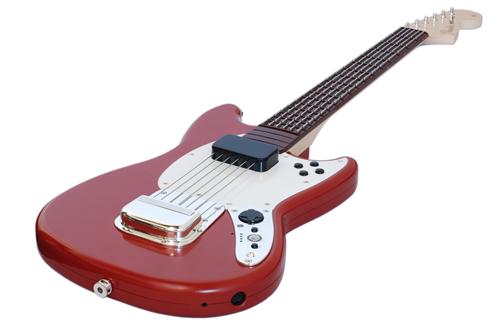 In all the cases we have looked at, adding complexity reduces consumer interest andÂ  interferes with the gaming experience. One example is the Atari Jaguar home console, introduced in 1993 with a 15 button controller that represented the epitome of needless complexity, clumsy ergonomics, and deficient usability. Although technically, Jaguar was one of the most advanced consoles of its time, it became one of the worst selling consoles in history. Rock Band 3 should fare better than Atari's doomed console. However, even if the new controller initially enjoys a following among early adopters and enthusiasts, in the long run the move to 100 buttons is just as ill-advised.

Power Gig also addresses the criticisms of musicians who deride rhythm games as dumbing down of music. For example, Led Zeppelin guitarist Jimmy Page and Jack White of The White Stripes have both come out publicly against Guitar Hero. As a result, some musicians have resisted partnering with these companies to produce in-game versions of popular music tracks. Power Gig seeks to address such criticisms and has enlisted the support of rock legends like Eric Clapton and Dave Matthews. Kid Rock, who also endorses the game, said in a recent press release,

I was never interested in pressing buttons on a guitar to entertain myself or anyone else. The reason I signed up with Power Gig is because this game is a way to not only have fun, but also to play real notes on an actual guitar! Anyone can now rock outâeven if they have never shredded before in their life.

Ask any musician what's wrong with video games like Guitar Hero and Rock Band and you'll get some variation of this response: If gamers spent half as much time with a real instrument as they did pushing plastic buttons on a toy version, they could become musicians instead of just mimicking them.

However logical such arguments may sound, they ignore the fundamental principles that made Guitar Hero a success, principles that Rigopulos and Egozy discovered through years of diligent research on the psychology of music, namely that most people do not want to tackle the complexity necessary to become real musicians. What endeared gamers to the original Guitar Freaks is all but lost in the latest iterations of guitar-based rhythm games.

As we have already pointed out in the book and in several articles, developers of such products are falling into the classic performance trap. Back in January, I posted a short article titled, Needless Complexity: The Classic Performance Trap, in which I discussed the uphill challenge faced by a startup that wanted to incorporate real guitars into music games. At the time, I wrote,

Some product developers seem to have forgotten the purpose of games when they create needlessly complex peripherals that attempt to provide more detailed and realistic experiences. These products are not only barriers to new players who feel intimidated by the control scheme, but also to skilled players who want to escape and have fun. We provide several examples in our forthcoming book, such as the NES "game" Miracle Piano Teaching System by Software Toolworks, a piano simulator aimed at helping "players" learn to play a real piano.

The problem is that when the controllers become overly complex, they become obstacles, not only to new players, but also to experienced players who play for âfunâ rather than ârealism.â Meanwhile, those who are motivated to learn to play a real guitar will likely do so the traditional way. Miracle Piano was never successful because it required the same learning curve as a traditional piano, but at the same time, it lacked the feel and sound of a real piano or even a quality digital keyboard. Kids who hated piano lessons hated Miracle Piano, and were dismayed by their parents' efforts to turn their beloved game console into an educational tool. In fact, games like Miracle Piano helped kill Nintendo's once unassailable monopoly.âWe got stuck with the reputation that we were the brand parents wanted their kids to have, which is the kiss of death,â said Nintendo's George Harrison in 1994.

There will always be gamers who will welcome these changes, and for them, Rock Band 3 and Power Gig will be a godsend, allowing them to take their favorite games to new levels. But like true musicians, they are âreally a tiny minority.â

The one consolation is that these games will continue to offer easy modes that allow gamers to use existing controllers in ways that are not unlike previous iterations of Guitar Hero and Rock Band. The question then becomes one of âCan the market sustain another round of rhythm games?â