Difficulty Setting in Multiplayer Games: Can it be done? 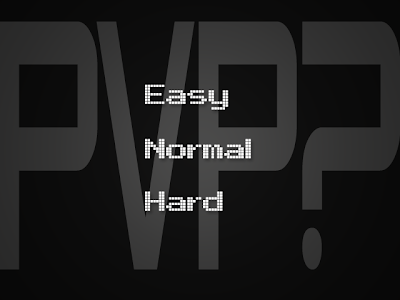 "Gameplay experience may change during online play." We're all familiar with this disclaimer. It's come to be accepted as an inevitable byproduct of the human element in social and competitive games. In truth, this unpredictability may be one of the facets that make multiplayer games so appealing, but then why is there no "random" difficulty setting in most single-player games?

Difficulty settings are there for a reason: they offer the right gameplay experience and challenge. How many times have you switched back and forth between "beginner" and "extremely difficult" settings in a single player game?

Let's take Nintendo's hit franchise, Super Smash Bros., for instance. Setting a computer opponent to level 9 can make them somewhat challenging, however, a level 1 opponent will do little more than walk back and forth, waiting for you to punt them off screen. An expert may even have to handicap themselves to get a proper game out of a level 9, and no amount of handicapping could make a level 1 threatening.

Yet this is the sort of experience you can expect in multiplayer. You can run into players who are still learning how to grip a controller in one game, and grand masters in the next. In fact, you can encounter both in the same game, and therein lies the problem.

The closest thing to difficulty settings in a competitive multiplayer environment is player rating. Ratings can help pair equally-skilled opponents against each other. However, they can be unreliable and assume that all players constantly desire highly challenging opposition.

The "easy" difficulty setting is not just there for beginners. Intermediates and experts seeking a more relaxed gameplay experience may choose to set the game to easy and just have some fun. Conversely, "nightmare mode" is not just for masters. Players looking for greater challenges may choose to play on the highest setting even though their skill level may be better suited for a lower level. Whenever possible, this choice should be left to the player to make.

It's very common to see difficulty settings in modern games accompanied by a short description. They will normally warn that a particular setting is for players new to the game type while another may be for players who've played the prequel or are familiar with the genre. Did everyone start out on equal footing when Call of Duty: Modern Warfare 2 was released? Not by a long shot. Those who'd played Modern Warfare 1 were at a huge advantage, yet there wasn't any way for a novice to find a game filled with other beginners.

Dividing players by levels is insufficient when you consider that their initial abilities can be drastically mismatched. But it may not be fair to pit promising beginners against intermediates and experts in many games. It's become quite popular to introduce the vertical advancement of RPGs into most genres. Players' abilities will not only improve with play, their characters' potencies will also increase as they gain levels.

Even in games whose vertical improvement is relatively minor, like in League of Legends, pitting a level 1 against a level 20 or 30 is entirely unfair. There are many situations in which the beginner, despite their talent, will be mathematically incapable of defeating the higher level. This is far more pronounced in MMORPGs, such as World of Warcraft.

The potential for handicaps that arise from levels presents us with a very easy way to initially establish difficulty settings in multiplayer. Selecting a "hard" setting will pit players against higher levels, while "normal" will bring them opposition of their level, and "easy" will place them against lower levels.

And if you've played your fair share of multiplayer games, you're probably thinking this won't work. It is entirely likely that highly skilled players, looking to dominate, would select the easy setting and go to town on some newbies. However, since there are two opposing settings, hard and easy, players who select easy should only be pitted against lower level opponents who selected hard. Therefore, although the higher level players will be at a clear advantage, they will not be facing newbies, but rather experienced players of a lower level who are looking for a bigger challenge.

Once the levels are exhausted and the endgame is reached, ratings and handicaps can take the place of levels in the adjustment of difficulty. Players who select hard will either go against opponents with higher ratings or incur a handicap. And, of course, the opposite would be true for those who select easy. If the handicap is significant enough, players who chose easy and were pitted against those who selected hard should have the same advantage that levels granted during the earlier game.

Encouraging the use of these settings may be the easiest part. Whatever rewards a game presents for winning or participating in a multiplayer match can be adjusted by the difficulty setting. Winning an easy match may present more points or experience than losing in a normal match, but less than winning one. And since winning on hard would be the most challenging, it should present the greatest reward.

I would, however, warn against making participation in "hard" games a greater reward than participating in normal or easy games. "AFKers," or players who enter a match but do not participate, are a sad reality of many multiplayer games that necessitate multiplayer competition for character advancement. These players simply log in to sponge up experience or points in games that allow for this behavior. There are other ways to force participation, such as yielding experience for actual actions rather than the match as a whole, but gamers are crafty and will always find a way to "cheat" the system. Unless your game accounts for this, you can guarantee that many AFKers will join hard games simply to lose as part of their scheme to advance their character with as little effort as possible.

Designers may also wish to emplace safeguards to protect novices from the "hard" setting and vice-versa. This can come in the form of requirements and bold warnings. A player may not be able to access the hard difficulty setting unless they first achieve a certain level or win-loss ratio. Players who select hard should be ready for the challenge. Since most games rely on teamwork to win, and the team who chose the hard setting are already at a big disadvantage, letting a true novice into the match would simply ruin their chances altogether.

So long as the human element exists, there is no way to completely prevent the resulting unpredictability, but that doesn't mean we have to resign ourselves to it entirely. While introducing difficulty settings into multiplayer matches in this way would certainly not guarantee players a uniformed gameplay experience every time they play, it would go a long way in letting them tailor challenges to better fit their likings.