Inclusivity vs Narrative Intent: a conversation with r/gaymers


Midway through the development of my narrative experiment flapping bird â a game of midlife crisis, my friend Nicky Case released the excellent Coming Out Simulator 2014. His game, an interactive narrative about coming out as bisexual to his strict, Singaporean parents, forced me to examine my own story and characters. I was a straight, white guy creating a game about a straight, white guy living in the suburbs going through a painfully stereotypical midlife crisis. The very blandness of the characterâs experience was a core part of the message. However, after playing COS2014 I realized that it did not have to be. 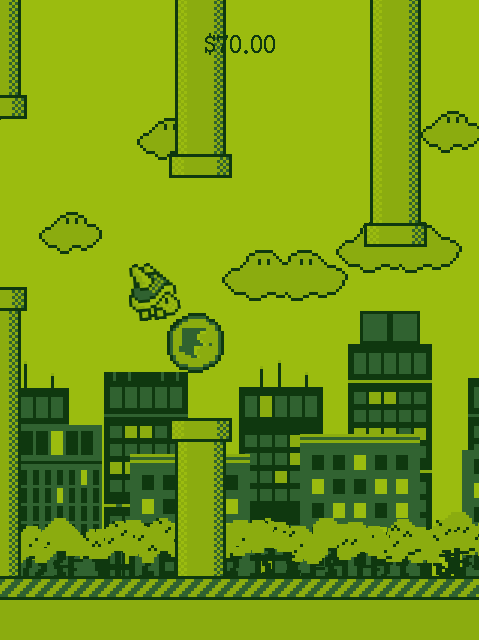 A screenshot from flapping bird

Although the character was the definition of heteronormativity in my mind, visually he is represented in game as a pixelated, Game Boy character out of the Mushroom Kingdom. Between rounds of play, the player is served snippets of story about the characterâs inner life. The visual was ambiguous, and after taking a good look at the story I determined the narrative could be too. Â Changing just two words in the story was all it would take to allow players to interpret the characterâs gender and sexual orientation as they desired.

But just because I could make the narrative more inclusive, I did not know if I should. The game was about Mr. Suburbia, a perfectly bland white guy with a wife, two daughters and a mortgage. Race does not play into the game at all and there was nothing forcing the character to be white (or for the player to even interpret him as such). But in my mind, my character was a walking piece of Wonder Bread.

I needed a sounding board. Would editing the language to be more inclusive make for a better game? Or would I weaken the narrative by using less specific language? To find out, I took to Redditâs r/gaymer forum to have a conversation with some LGBT gamers about the game. This conversation ended up being one of the most fulfilling parts about building this tiny, narrative experiment. 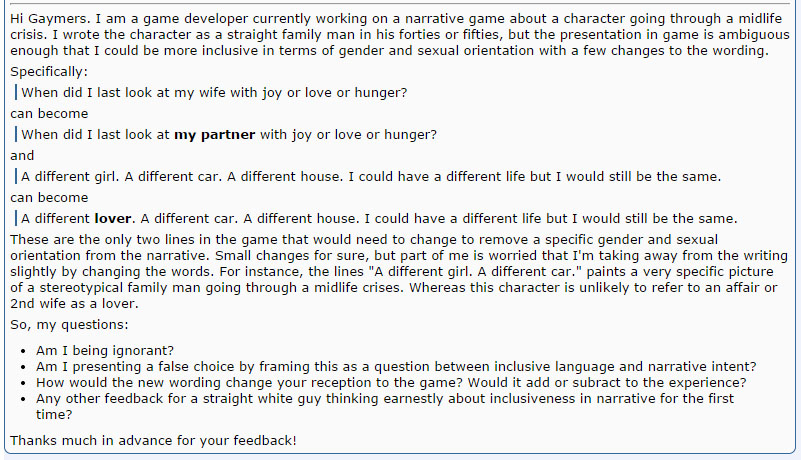 Obviously, the commenters on a single Reddit thread cannot possibly represent the opinions of all LGBT gamers. However, I figured an honest conversation about the topic would be better than trucking along with my walking piece of Wonder Bread never stopping to question my own ignorance.

Changing the words would be fairly simple. Wife could become partner or spouse. Girl could become lover, plaything, etc. More inclusive options existed. I could even (as redditor jaesin suggested) put gender and orientation toggles that changed the wording based on the playerâs preferences. But I was concerned, rightly or wrongly, about watering down the narrative by changing the language.

In terms of word choice, TheOldOak wrote âPartner, to many people, has become a buzzword for a gay significant other. You actually risk confusing your audience by using that word intending to be inclusive. It's not incorrect, but there are better options to still get your goal accomplished. Also, I would change lover to something elseâ¦ you may want to try a more neutral word to include more innocent types of relationships. Try using words like spouse, mate, sweetheart, companion, beloved, etc.â While one reply agreed, saying âmy husband and I often refer to each other as spouses. Even âhusbandâ is confusing in the gay world sometimes, I think because it's so new!â another disagreed, taking a global view and letting me know âwhile this may be the case in some places in American culture, many other English-speaking countries use âpartnerâ as a gender neutral term to refer to your partner, regardless of gender.â

Some users thought the game would be stronger for inclusive language. nearlyP wrote âthere is absolutely nothing ignorant about leaving a character's sexuality or preferences ambiguousâ¦ Unless the character is written very specificallyâ¦ there's no reason not to make it more ambiguous and open to everyone if the character is going to be ambiguous anyway. Personally, I think the opposite is true and that it's stronger with âa different lover.â You're already in the territory of ambiguity and possibility with âa different girl/car/lifeâ rather than âanother girl/car/life,â so why not play it up and really emphasize âdifferentâ rather than âmore of the same?ââ

The replies that spoke most clearly to me, the ones that helped me figure out the story I wanted to tell, where the ones that made a case for narrative intention and specificity. niwmâs top rated reply was âas much as it's always nice to see more gay and bi characters in games and movies, I'd personally vouch for narrative intent, and making him straightâ¦ this is the character you've createdâ¦ the fact that he happens to be straight might just be a small part of him but it's a piece of the puzzle regardless. â

The reply that most helped make my decision not to change the language came from vaguelyhuman, who asked âare you trying to speak to something universal or are you specifically trying to paint a picture of malaise within conventional domestic life? If it's the former, go with inclusive language. However, if your point is to show the dark side of idealized suburbia than having the protagonist be a straight male explicitly actually works better. Again, it depends to what extent cultural concepts of normalcy, traditional gender roles, etc. tie into your story.â

Thanks to vaguelyhuman's line of thought, I realized that I did not want to change the wording in flapping bird. Specifically, I did not want to change the line âA different girl. A different car. A different house. I could have a different life but I would still be the same.â Whether players would interpret it this way or not, this line was the key to Wonder Breadâs personality. Not only is he depressed, not only is he materialistic, but he sees his wife as a possession not a partner.

In fact, he sees all females as possessions not people, girls not women. This materialism and misogyny is at the heart of why Wonder Bread is dissatisfied with his life. A different man in his shoes would view the same life very differently. But Wonder Bread cannot be happy so long as his world is defined by his possessions.

Comments like the one from tommorris helped me figure out how to approach inclusivity in the future. âIt's great to have LGBT characters, but it seems better to do that by actually having LGBT characters rather than by taking a character written to be a straight character and then retrofitting sexual ambiguity onto them to be inclusive... if you are going to do it, do it whole-heartedly and create something interesting rather than just doing it to fill a diversity quota. If you want to write good gay characters, read good gay fiction or autobiographies of gay people and try to understand a bit of the subjective feeling that those characters have. Also, read this [post on writing gay characters.]â

Being truly inclusive has to go further than ambiguity, further than tokenism, further than tropes. If I want to be inclusive, I need to write a game narrative with authentic LGBT characters. Inclusivity cannot be an afterthought. It cannot be tacked on. It needs to be designed from the ground up.