The history of the Quest Compass & its dreadful convenience

First, I'm an RPG fan, so this analysis will be mostly RPG-oriented.
Second, when I say "Quest Compass" I'm referring to a very specific UI item:

Its defining trait is that while the first three merely orient you or display your surroundings, the Quest Compass points you towards something. It directs you, tells you where to go.

It's omniscient, guiding you to places, object and people no one knows about. It replaces exploration.
But I'm getting ahead of myself...

I think it's safe to say that GTA III (2001) popularized the quest compass as we know it - a circle on the corner of the screen that serves as mini-map, displays nearby landmarks and guides you to your current quest objective: 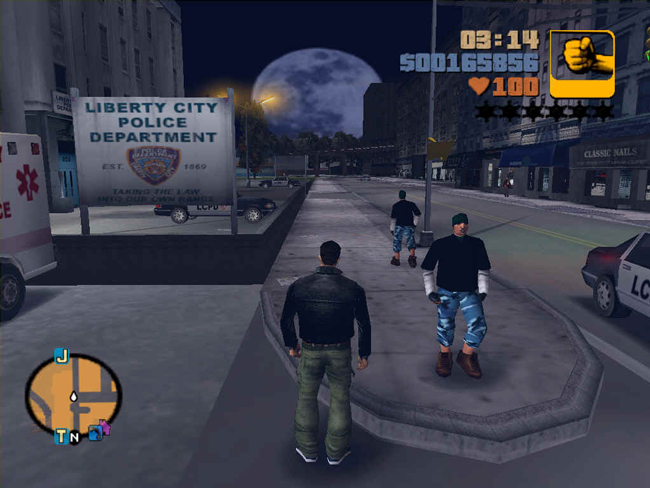 And even the first GTA (1997) already displayed a little "quest guide" arrow, directing the player towards the off-screen mission objective (the tiny yellow arrow bellow the taxi): 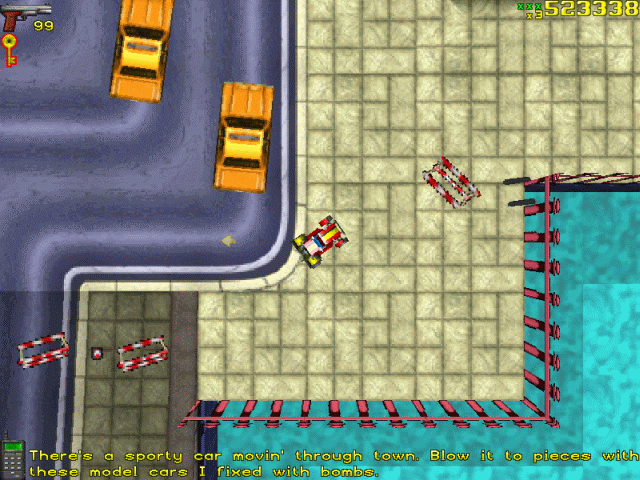 Other early open-world games of the time were also experimenting with the concept. In 1999 alone, we had the long-forgotten Urban Chaos, which had an enemy scanner / quest compass; Driver, with its street guide mini-map and Crazy Taxi, with its giant arrow pointing towards your next objective:

It's also interesting to consider the larger cultural scenario. By the time of GTA III's release, online map services like MapQuest, Yahoo! Maps and Zip2.com, where you could PRINT (or FAX!) a map with directions were booming - in 1999 AOL had bough MapQuest for 1.1 Billion dollars!

Anyway, GTA III came out and defined how we think about mini-maps and guiding players in open-world 3D games. Players could easily drive and take quests without getting lost, and there was much rejoicing.

This is important, because another game from the time was having problems with that...

Where the hell is Caius Cosades?!!

The very first quest in Morrowind (2002) is rather infamous. You're a prisoner (of course) released into service of the Empire, and must now report to your superior - Grand Spymaster Cauis Cosades:

It's pretty clear what you must do - it's the first quest in the game after all. Plus:

So you take a transport (or walk) to Balmora. The South Wall Cornerclub is right next to you - at the corner of the south wall (duh). Inside you ask for Caius and they tell you that he's in a house just outside the club. Here's the map: 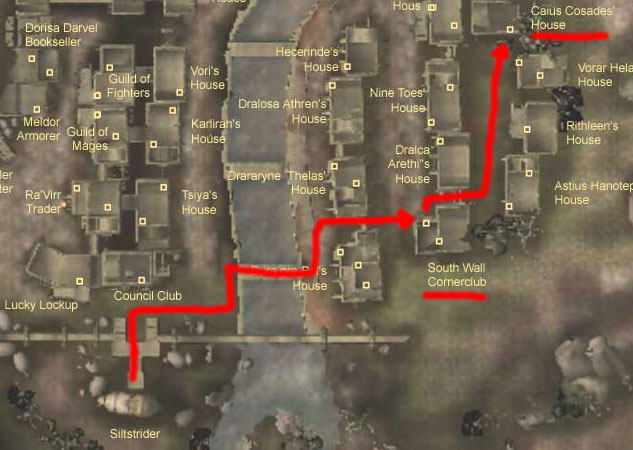 Yet many many players couldn't find him. Like, A LOT of them.

There's a reason for that - Morrowind was the first Elder Scrolls game to be released on consoles. Quests in games like Baldur's Gate or Fallout were more complex than those in console JRPGs. PC players were used to trying to decipher cryptic NPCs, searching endlessly and even drawing maps. It was a cultural shock between an old PC series and the new 00's console audience.

So for their next Elder Scrolls game, Bethesda decided to offer a guiding hand. In Oblivion (2006), one of the often hyped features was a compass, located at the bottom of the screen, that also displayed nearby landmarks and the objectives of your current quest: 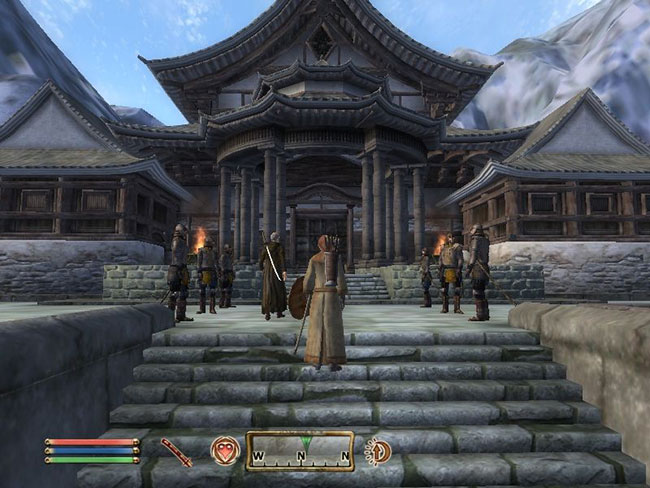 Of course, not everyone was pleased with this. While the journal and quest still gave detailed directions, you couldn't turn the quest compass off unless you used a mod.

This is extremely important. Not only Oblivion was the first RPG to use a quest compass (as far as I can tell), but it was a resounding success. It sold almost 10 million units, introducing a massive new audience to RPGs...and "teaching" them to quest by following a quest compass.

Keep this in mind.

A Brief World of Warcraft Retrospective

A decade ago, WoW was MUCH BETTER! a very different game. Leveling up was SLOOOOOOOOOOW.
It was common for people to spend weeks grinding in The Barrens.

This was in part due to extremely low XP rewards and those goddamn "Gather 10 fangs" quest, which had a 0,001% 10% drop chance and would require you to murder like 300 tigers....but also thanks to quests that required you to find something, like this:

The thunderhawk, <name>, is a fierce beast. It is time for you to face them. You must find where it roams, and bring me its wings as proof of your successful hunt.

Yes, it's a "Kill X" quest, like so many bad quests are, but you must find the creature first. It added an element of exploration to it, of testing how familiar you are with your surroundings.

This led to incredibly immersive experiences - when hunting a particularly difficult or hidden objective, I would stop passersbys and ask them for directions. This simple interaction to me is still the fullest realization of an MMO - an RPG where the "NPCs" are actually other humans, which you can stop and chat with, join for a quest, become friends, etc...

It's a dream that dates back to the early 80's, when games like Ultima had NPCs you would awkwardly interact with by typing keywords - "name", "job", "bye". Through the decades there was advancement made in the AI & interactions, but who needs that when you have a fellow human behind every single character running around? All of them unique and interactive!

Of course, MMOs are still like this on the surface. Yet, deep down so many things changed - flying mounts which eliminate "social travel", instanced areas which isolate players, Raid/Dungeon Finders which remove the need for socialization, online wikis which turn any question into "JUST GOOGLE IT!"... it's an automatization of gaming, with convenience as king.

And spear-heading those changes was the Quest Compass.

Not everyone enjoyed walking around for hours trying to find an item/enemy/NPC. Some where playing only for the PvP or Raids, while others were leveling up their second or third characters.

Back in 2006, these players relied on wikis, addons like AtlasQuest (which displayed in-game text hints for every quest) and level-up guides showing optimal questing routes:

Then, in January 2007, World of Warcraft: Burning Crusade was released.

And with it came new UI customization options, which quickly gave birth to TomTom and Quest Helper - two addons that basically added a giant arrow pointing to your next objective: 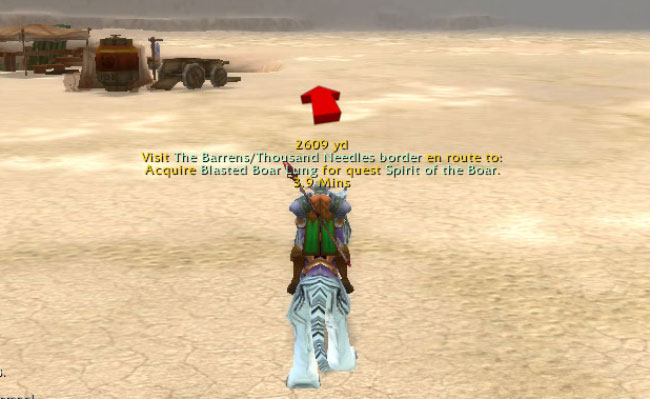 Crazy Taxi RPG - Follow the arrow, collect / talk / kill whatever is at the end and onwards to the next quest.

Ok, cool. I guess those leveling up an alt or just playing for the PvP will download it, but surely most people will have no interest in th- 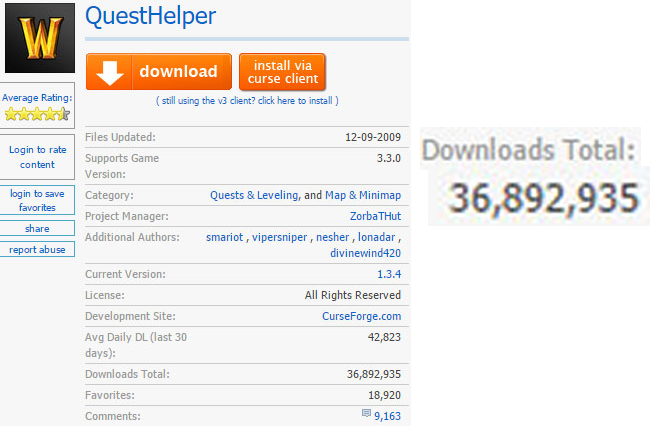 That's a Wayback machine capture of Curse.com in 2009. Yes, those are 36 MILLION downloads, with an average of 40k downloads PER DAY! Of Quest Helper alone!

For reference, the most downloaded mod in all of NexusMods' history currently has 18M downloads. That's less than HALF of what Quest Helper got just from 2007 to 2009:

So... it was kinda popular.

More over, it appeared and grew popular right as WoW's audience increased... Note that I'm not implying correlation, but rather that millions of players got into MMO's guided by a giant arrow over their head, zip-lining from quest to quest.

"Follow the arrow" addons began in early 2007 and Blizzard resisted the pressure until December 2009, when it incorporated a quest tracking system into it's own UI (Patch 3.3.0). WoW was at its peak at the time, with 12 million players - all now following a quest compass.

(WoW's audience only declined since then - feel free to imagine a correlation here. I sure do.)

In the years since, WoW's quest tracking system was continuously expanded, and now it even automatically sort quests by proximity. All for the sake of convenience.

Oblivion was the most popular RPG in the mid/late 00's. WoW is the most popular MMO ever. Quest Helper has over 40M downloads. Then came Assassin's Creed, more GTAs, FarCry 3, Fallout 3, Just Cause 2, Batman: Arkham City, Borderlands, Infamous, Mad Max, Shadows of Mordor, DA:I, The Witcher 3...

Suddenly, every single open-world game came with an omniscient quest-compass. It became the norm.

Even when it didn't make sense. The Gothic / Risen series was built on verisimilitude and a rewarding sense of exploration - there were hidden caves, paths and caches everywhere. Yet, both Gothic 4 and Risen 3 introduce a quest-compass in a desperate (and failed) cry for public acclaim. 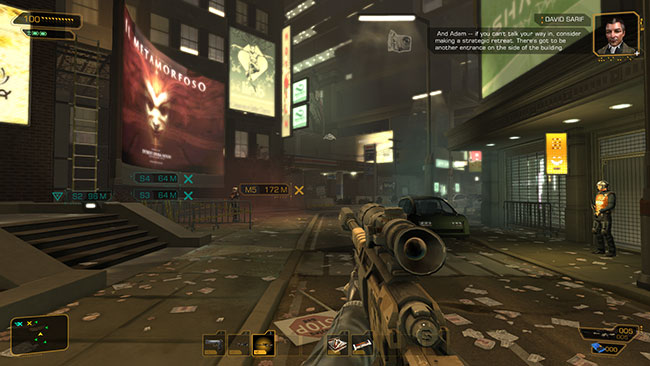 Not only it's distracting, but wasn't Deus Ex a game about investigating, sneaking, considering multiple paths & lateral approaches? And it only has a few big open areas! Did it really need those?

But Skyrim (2011) was the one that pushed things even further.

Not only the quest compass was there, larger than ever, but now it was MANDATORY. Since people were just going to follow the giant arrow, Bethesda didn't even bother to write actual directions. No one tells you where locations, people, monsters or items are. You just magically know.

Not only this makes zero sense, but it made the quest compass impossible to ignore. Simply modding it out it made the game unplayable. Fans had to create a mod to rewrite the quests so that they actually tell players where to go!

How lazy and absurd is this?

Luckily, I'm not the only anti-quest compass protester around.

Besides excellent modders trying to restore sanity to RPGs, a quick search on the internet will reveal several forum posts and even editorials on how people suddenly find there's an actual game world lying behind the omnipresent compass! :shock:

They realize that games are much more exciting when you immerse yourself in them, watching your surrounding, using landmarks to navigate and growing to know the world around you.

Remenber that since 2006/2007, exploring open-world games aided by a quest compass is the norm. An entire generation was raised under this design homogeny.

Dark Souls is name-dropped a lot these days, but part of its novelty came precisely from abandoning all this hand-holding and convenience. "There are two bells somewhere, go ring them." It broke the status quo.
For a generation raised guided by the quest-compass, it was seductivly dangerous. For older player, it was a refreshing return to olden times.

Survival games are also making a dent, with extremely popualr titles like DayZ, Ark, H1Z1, Rust and the likes all designed around NOT having a quest compass. And the audience loves them. 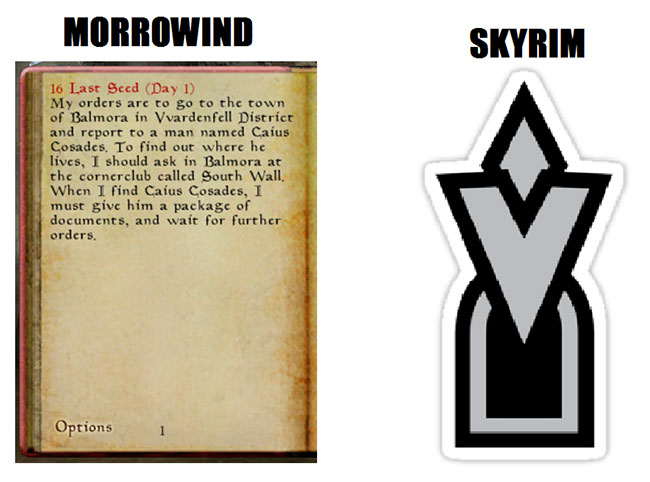 PS: FyreWulff on NeoGAF recalled a very famous quote from Peter Molyneux on the subject:

"Mini-maps are shit. They're shit because you make these multimillion-dollar games, and people play them staring at these little dots."