Enemies as targeted challenges in roguelite/deckbuilders


Hi! We’re TavroxGames, a French indie video game studio. We are currently making Neurodeck, a roguelite/deckbuilding game about mental health. The game is currently in open alpha with updates planned in the coming months.

This article is part of a series where we reflect on the design of the game. Here, we will talk about how we designed enemies as targeted challenges for the player. First, let’s talk a bit about the common axes of design in the roguelite/deckbuilder genre.

As the genre structured, dynamics appeared in the way resources (cards, passive abilities..) were designed to maximize the impact of player’s choices through the game. The presence of these dynamics help skilled players making clear choices about what they want to get. They also offer another layer of complexity while choosing between different items. The following list presents recurring axes of design in deckbuilding games :

In “Neurodeck” as life is regenerated between fights, the player can’t get “block” to reduce damage taken. Most of our damage mitigation comes in the form of healing (direct or indirect). Basically, healing is equivalent to “buying time” to develop your strategy. The more enemies deal damage quickly, the more healing can help setting up your synergy. 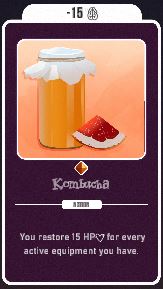 For exemple, the “Kombucha” card heals you for up to 30 points in the right condition, allowing you to buy some more time to set up your synergy (or simply play more cards).

A bit more about “scaling” : this notion means that you’re “investing” resources for the next turns. Buffing your character or poison are common scaling effects, but there other exemples. More complex scaling effects can include setting up combos or meeting other requirements (ex: “if your hand is empty”). 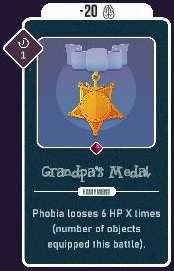 Another one: creating orbs with the “Defect” in Slay the Spire is a kind of scaling, as the orbs help you over time.

In Neurodeck, phobias are fought on a 1v1 basis so this one won’t apply in our case (but it’s a common axis of design in the genre).

Okay, but how does it relates to enemy design ? Here’s a design spreadsheet about the phobias currently implemented in the game:

Here are three examples. As you can see, we are defining targeted challenges for each phobia in the game. They are tied to front-load/scaling (“can the player can deal damage quickly ?”/“does its deck lasts on the long run?”) and to the speed at which you take damages (“does the player’s deck has enough HP/SAN healing?”). The presence of special effects is also checked (“does it survives buff/debuff cleaning ?”). Our idea here is to give an interesting variety of challenges to the players.

As players have a lot of agency in changing the cards of their main deck, this helps us to make choices more meaningful. If you chose a lot of cards relying on alterations for example, Mysophobia will be way harder to defeat. If your deck lacks ways to regain SAN, Tokophobia will also be harder to defeat. As another example, Blennophobia deals damage over time to the player. You probably don’t want to make the fight against this phobia drag on for too long.

We hope you enjoyed reading this. If you want to chat about design or give feedback on this article, ping us on Discord!