Don't wanna be indie, at Fayju we want to make 'Big Ass' games with Amazing Frogs inside. 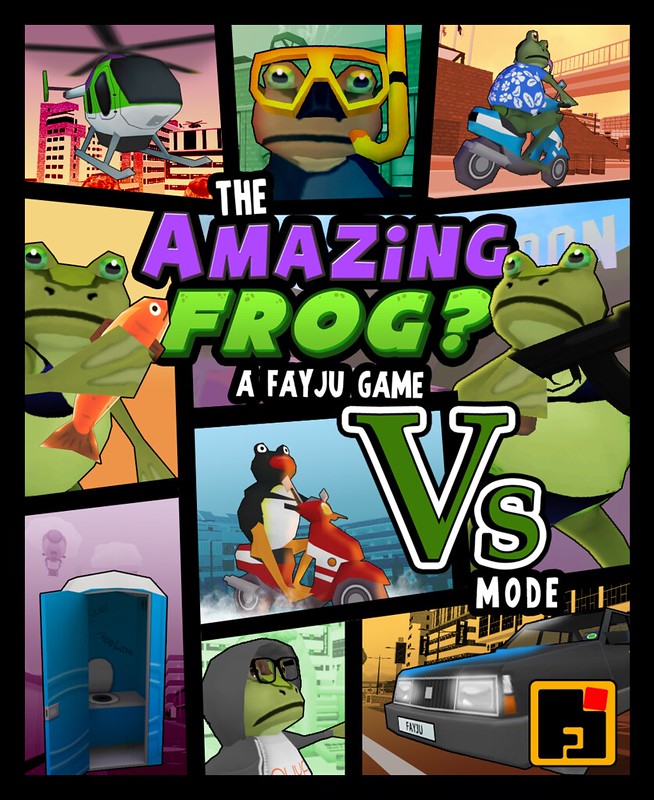 We're Fayju, the team who made Amazing Frog? and we are the smallest type of team you can get...two people. Fayju is me, Gaz Bushell ( @fayju ) and Hal Jackson ( @feckwagon ). We love making games, but we are cursed with stupidly big ideas.

Seriously, we tried to make a simple throw-a-rag-doll-frog gameâ¦ you know for iOS with some purchases in it, free-to-play, repetitive-compulsion loop (groan), but we just couldn't do it! We didn't want to. Our desire to make something bigger always consumes ANY idea we start on. This -- I realized -- is a product of me and Hal working together. Â At one point, it almost felt like we would never release Amazing Frog? because we just couldn't stop adding content to it.

Its not enough to be labeled "indie" and I don't know if I want to be indie.

We make games just like the "real" companies do, we just don't have their kind of money or resources. Yes, I wanna make 'Big Ass' games with Amazing Frogs in them, exploding all over the place, flying into toilets with crossbows, being spat out on the moon with a laser gun and a JetPac seeking a stolen love interest, and preparing for an attack from another galaxy. Ultimately, I guess we are "indie" because we are two peopleÂ independentlyÂ working our asses off on a bunch of our own games. We chose this path, because we got fed up of being in situations where we were told what we couldn't make or what we should make. We've done our time.

So when we decided we wanted to aim to make "Big Ass" games (as I call them), I thought, "how the hell are we going to do this?" We have little structure. We're poorly organized, and what we want to build seems to change with the wind.

Our games have to be grown, you know...organically :o).

So, theoretically, if a team of 30 people takes 2 years to make a "Big Ass" game, it should take 2 people 30 years, right? That's logical. Well, I'm not gonna do that. Besides, technology improves to make development easier over time, so I guess that 30 years should shorten exponentially. Well you'd hope so.

We needed a way to release the game in stages and grow it into the game we want it to be. We couldn't possibly afford to work on one game for 10 years (exponentially shortened).

We build our games iteratively.

I don't think we could work any other way. We approach all our developments prepared to mix things up as if we were living at the Mad Hatters Tea Party. With games like Amazing Frog?, its particularly important. The main aspect of the game is that it's open world. The intention of the sandbox format of Amazing Frog? is to encourage players to discover their own fun. Its unpredictable how people will play, and -- as a response -- we have to be flexible with how we add to the experience. This is all so that the game can evolve into this bigger game that we are aspiring to create.

After all, players also have demands of the game, from requests for Princess Frogs, drivable cars, missions, downward facing trampolines, NPC's and other gameplay preferences and we want to put them all in. In short, people do and want crazy things and they have to be integrated into the game. We have to make a place for people likeÂ BluntwolfÂ too, and we never saw him coming. Then when we see people like ScrewAttack, GameGrumps and PewDiePie playing the Amazing Frog? on YouTube, apart from being blown away, we have to let it to influence our game making decisions. We can only allow these types of conversations to directly influence the evolution of a game if our development process remains fluid. Not only do we need to be building in an environment that supports that kind of ongoing adaptation, but also we need our games to be on platforms that not only allow us to work this way, but embrace this kind of iterative design process.

Eventually , with hope and tenacity we will achieve the creation of a "Big Ass" game made for and inspired by its audience.

Right now you can play Amazing Frog? only on OUYA.