Let’s start with some stats:

Our Greenlight campaign reached #97 with a little over 900 yes votes.

We’ve tried our best as indie devs to market our game to the best of our abilities. Reddit and imgur have been a great source of “eyes” on our game. Now let’s talk about what it took to get these numbers:

7 Months Prior to Kickstarter/Greenlight Launch

I've been a fairly regular redditor for a while. Started an account 5 years ago and fell in love with the community.  Because of this, I knew of some smaller subreddits such as r/gamephysics, and I thought they might like what we were developing. So I made (what I thought) was a cool .gif and posted it to r/gamephysics.  Even though it was a rough gif with a rough frame rate it was very well received:

With how well the above post did, we were feeling (overly) confident at this point and I thought any post we would make woudl skyrocket to the front page of whatever subreddit I posted to.  So, we made a new gif that we thought was fantastic and would easily see the top of r/gaming

These posts "failed" and gained no traction. To this day, I'm not exactly sure why.  Maybe just the fickle nature of social media is part of it.  It could  be that the post titles were not nearly as good, reddit seems to respond very well to titles with a personal touch. Compare the title of my first .gif that did well on r/GamePhysics “[Fictorum] Game I'm working on with destructible buildings” to this post which I titled “[Fictorum] New spells and Enemies are fun to play with” and decided on an even worse title on r/gaming of “Lightning, Glaciers and Destructible buildings”

At the very least, r/gaming should have included the title of the game in the post, people like to see that.  It's also just good marketing.

6 Months Prior to Kickstarter/Greenlight Launch

Unsure of what was going wrong with our posts, we waited until we had the major feature of our game to show off. Then we decided to post our spell shaping system to r/gaming. This post did fantastic:

Thee success of the r/gaming post caused us to launch our subreddit r/Fictorum where we gained an unreasonably large amount of subs (I believe it was around 800, easily the bulk of our subs).  This gave us even more confidence and a nice ego boost part way through our development.

Now for the bad news, reddit is not an advertising platform.  There is a 90/10 guideline on reddit, only 10% of your posts should be about self-promotion.  An r/gaming mod deleted our post (note: Not all subs follow this guideline, the default ones/larger ones almost always do). So while we racked up over 70k views, we were still on teh front page of r/gaming when we were removed and could have probably passed 100k if we were not deleted.

So I decided to stop being as much of a lurker as I had been, and posted all the interesting projects that I found through various sources (here, IndieDB, other sections of reddit).

Had the idea to post a Christmas related gif, since I was working through Christmas anyway, and the post did really, really well. Again, I posted to r/gaming/.

At this point we were picked for a Community Spotlight for Fictorum on r/Gamephysics. Not sure how much this really helped us, but it was nice to be forced to do a write-up for our game anyway.

At this point, working on some polish of our game, we didn't feel we had anything compelling to post or update, so we kept silent on reddit for a while.  We were running our own blog and crossposting it on IndieDB and the occasional post to r/gamedev's Screenshot Saturday posts.

We’d been hard at work on our systems of Fictorum and hadn’t had anything new to show off for a while, so we decided it was about time and posted to r/gamephysics/:

This post could have done better had we paid attention to a fairly simpe fact. Our main character is hideously boring, and possibly just hideous, and the animations are passable at best. Further, sprinting mid-way through the gif just makes the game look unnecessarily floaty.

I was testing out using imgur instead of gfycat, altough I missed that I could post it to imgur's community.  This gif may have failed because it was a little short.  My codeveloper had posted to r/gamephysics/:

Title: [Fictorum] This meteor has something to say about our new town hall
total gif views: 3,000

Which probably would have done better since you can see that the buildings are traversable.  Note: even though the r/gaming/ post did substantially worse, we still had a significant amount of views due to the size of r/gaming/ compared to  r/gamephysics/.

We had originally planned on launching our Kickstarter at the beginning of May, but we just couldn’t get all the assets we wanted to in our game by then. So we decided to launch in June, right after E3. Which means the week before we’d be trying to build interest during E3.

We also submitted our game to indiemegabooth, and had to create a 3 minute demo of our game, which we ended up liking a lot. So we posted it to r/games which is more receptive to longer content:

This post didn't do as well as we had hoped, possibly due to how close to E3 we were at this point, and a lot of E3 rumors and leaks were being posted.

We also tried contacting as many youtubers/twitch streamers as we could to play an Alpha demo of our game. We got a decent amount of interest from smaller Youtubers, and it was great seeing people play our game. I posted to r/letsplayto try to get as many people showing off Fictorum as possible. This didn’t yield the eyes we thought we needed to have a successful Kickstarter campaign even though we had planned on launching in a couple weeks.

Then I decided to try to get word of my game out during E3. I had a feeling since almost all of the large developers show off their games in the news conferences before E3, r/gaming/ wouldn't be flooded during the week.  I look ad the E3 schedule and picked Tuesday, because I noticed only Nintendo had their news conference that day (the Treehouse) and had already said that they were just showing off the new Zelda basically (holy crap does that game looks fantastic).

So I created an imgur album and posted it to both r/gaming/ and realized I could share on imgure directly.

Title on r/gaming/: We were too poor to exhibit at E3, so we created a digital booth for Fictorum

We were too poor to afford to go to E3, so we created a digital booth for Fictorum

This did great for us, staying in the top 5 posts of r/gamingfor longer than it should have (The trailer for the Zelda game was Number 1, until the guy that submitted it, accidently deleted it). The album itself generated over 150k views.

I learned a couple of very valuable lessons with this post.  First, the imgur community is much larger that I thought generating more than half the album views.  Second, I made a small mistake, all of our social links were located in the 11th image. Imgur albums only load the first 10 images by default and you have to click "load more" to get to the 11th, a lot of people didn’t click to that 11th image. The stats are striking, the views on the 10th image alone are 258k (no I'm not sure why the views on the images are so much higehr than the album). The Views on the 11th image, if I remember right was 75-125k (I reused this same gif in our latest album, and it is now up to 231k, still less than the first album even though it's been used successfully in 2 posts).

This is also where I learned imgur is a huge community: 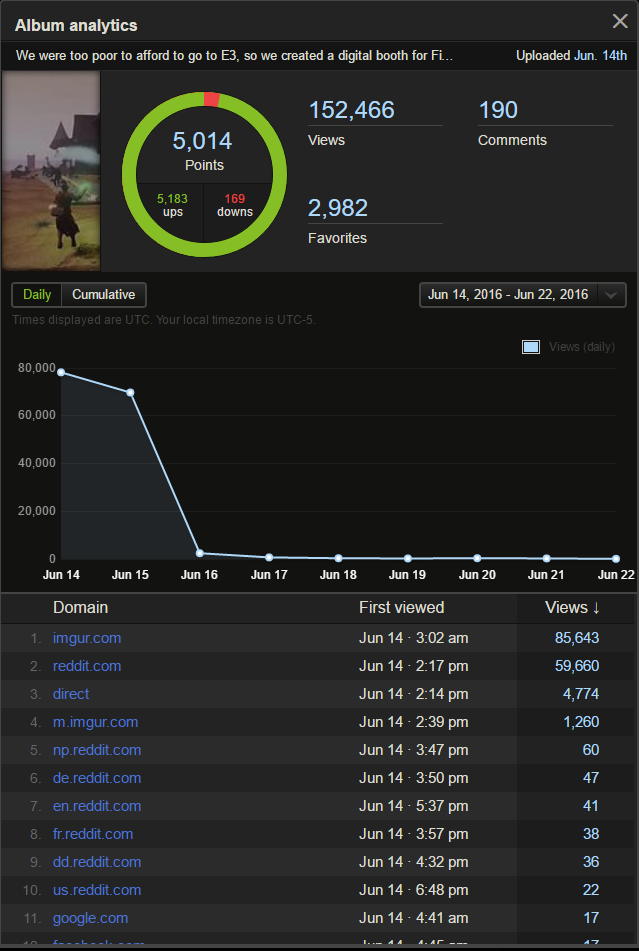 We should have been making albums/gifs and posting to the imgur community since the beginning.

Well here we are now, I tried a what I thought would be a longshot post of thanking the reddit community for their support. This post appeared to have barely missed the front page of r/gaming/

Thanks community for your support of Fictorum so far!

Title: Thanks r/gaming for your feedback and support of Fictorum so far!

So while we didn’t catch hit the front page of r/gaming/ Imgur still generated over 75k views for us.

Social Stats after 24 hours of Kickstarter:

Conclusion and Wrap Up

Other smaller things we've been doing:

We also have been posting a blog to IndieDB for a long time now, at first weekly, but we slowed it down to biweekly and started inserting a twitch stream in “off” weeks.

Things we should have been doing in hindsight

I hope you enjoyed the blog, and I really wanted to detail all the work we have done to try to get noticed and try to build a community. I hope this gives some insight on how hard launching a successful Kickstarter campaign is and how much work and luck it takes to start building a community.