Welcome to our ongoing series of Developer Diaries for THE ALCHEMIST CODE—the global version of èª°ã‚¬ç‚ºã®ã‚¢ãƒ«ã‚±ãƒŸã‚¹ãƒˆ (otherwise known as “For Whom The Alchemist Exists”)—the most widely sought-after mobile Strategy RPG with 9 million downloads worldwide!

Join us as we delve deeper into the vast and rich universe of the game and share behind-the-scenes details on the making of THE ALCHEMIST CODE.

In the previous Developer’s Diary, THE ALCHEMIST CODE Version 3.0 was released along with the introduction for two (2) new features - Mementos and Enlightenment. We hope that through these new features, your gameplay experiences will be enhanced and at the same time know your favorite characters better through the little side stories from Mementos.

The excitement does not just stop there as we are constantly exploring new features to enhance your gameplay experience. In this series, our Developer will share a new feature that will be released with THE ALCHEMIST CODE Version 4.0. This feature will test your perseverance, will, and ability to overcome seemingly impossible odds.

Now, let’s take a closer look at some of the considerations and thoughts behind the creation of this new feature, Raid.

This new feature is introduced in THE ALCHEMIST CODE Version 4.0. in conjunction with THE ATTACK ON TITAN collaboration as these monstrous Titans are the perfect enemies for all Alchemists to experience defeating “gigantic” bosses packed with an enormous amount of Health Points, which take efforts  and tactical skills to defeat.

The purpose of creating this new feature is to give players the opportunity to bring down intimidating enemies towering over multiple areas. These enemies possess different attack patterns and skills which pushes the level of game difficulty. The main objective is to bring down big bad bosses until one lap is completed.

Overall, the Raid gameplay is broken down into three (3) major parts – (a) Bosses (Raid Bosses and Area Bosses), (b) Areas and Laps and (c) Co-op. 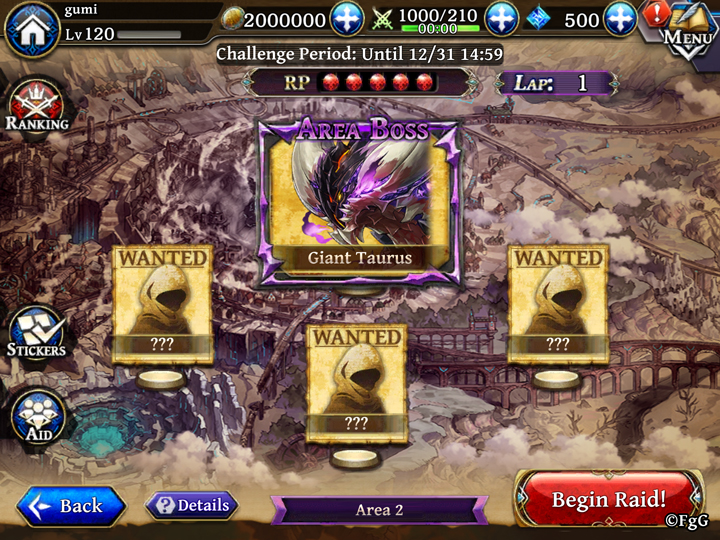 Raid bosses are a mystery until you meet them in the battlefield.

Now, let us delve into the three parts of Raid. Covering on the first part, “Bosses”. They are categorized as Area Bosses and Raid Bosses. To simplify things, an Area Boss is the final enemy you will meet after defeating all the other Raid Bosses within the same Area. As mentioned earlier, each encounter with the bosses will require time and new tactics. And each attempt in defeating the bosses will exhaust Raid Point (RP).

Similarly, to how AP works, we do not want our players to get worn out by the gameplay but to take some rest time to strategies through on the next. 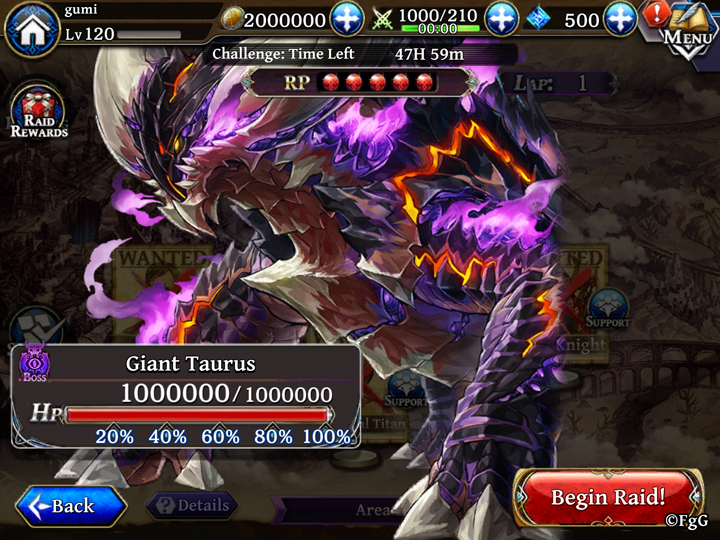 Giant Taurus is one formidable enemy with a large amount of  Health Points. Note that image taken during development might differ on the actual release.

Next, let us touch on Areas and Laps. Areas are similar to the different stages players have to clear. As such, players can always look forward to unlocking the next Area and defeat the bosses standing in their way. By completing all areas, Alchemists have successfully completed a Lap. Once the bosses are defeated, players will not be able to defeat the same boss or the retreat into the previous area as we want players to progress forward and focus on what lies ahead of them. Do note that the difficulty of the laps increases, so stay very focused and strategies carefully.

Lastly, the Co-op gameplay. The Co-op gameplay is added to create another avenue for social interaction. In essence, Players can reach out to help out players in need or shout out for help when encountering a difficult boss in Raid. Players in Alchemia Port will have access to their own dedicated chat channel so as to band up, work together and bring down enemies!

Alchemists can only seek for aid once they have lost a fight, whoever attempts to fight and withdraw mid-way will not be eligible for aid. 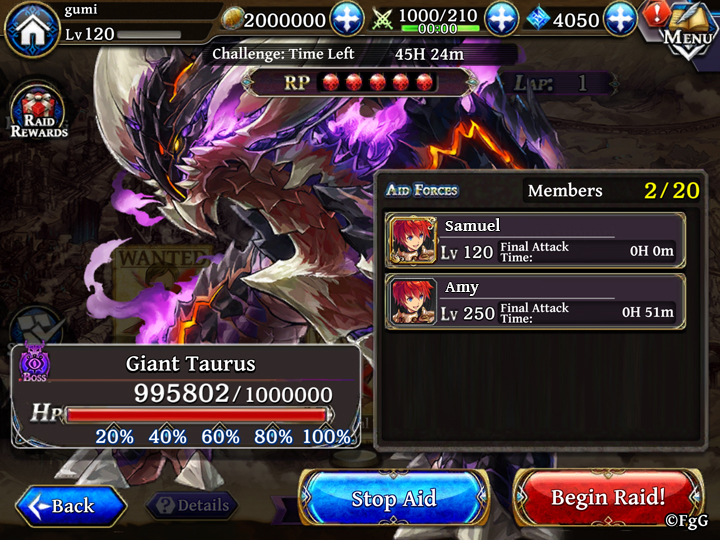 The more Aid you receive, the faster you can defeat the Area Boss.

We have included various rewards for all helpful Alchemists. This is to encourage the community to bond stronger.

The rewards system is designed to fit our philosophy for Raid - Perseverance, and Cooperation. 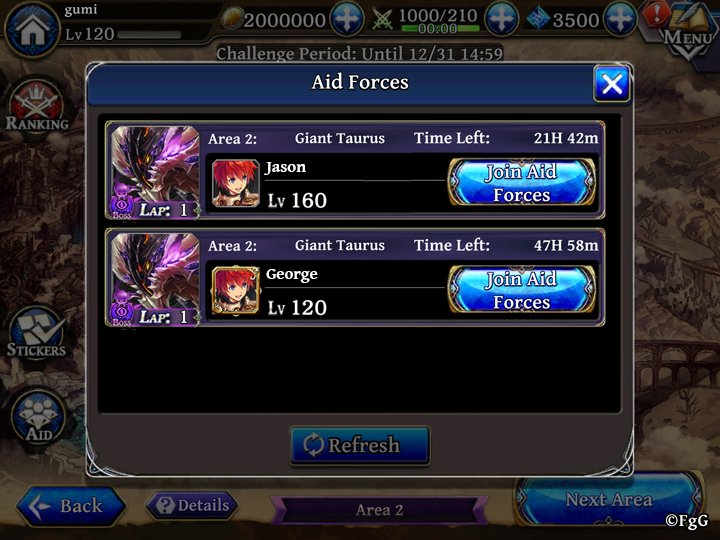 Aid Forces play a major role in the Raid Feature.

Let us share with you the difference between these rewards. The Challenge Reward is given to those players who challenged the Bosses but lost. This is our way to encourage players to play until the end without withdrawing. We think the best reward you could have for challenging any difficult Boss is to see your cumulative effort making an impact. To further encourage the player to not give up, Players will also get the Damage Rate Reward for reaching damage milestones. For example, reducing 25% of the Bosses’ Health Points.

Lastly, Defeat Reward and Area Clear Reward are given to players who have defeated the Raid Boss and Area Boss respectively. Raid Complete Reward is only given to those who fought against insurmountable odds and proven that they have the skills and ability to complete the whole Raid. To show our appreciation for your efforts, we have stuffed Raid Complete Reward with rewards we deemed worthy of you.

Players can also earn unique rewards such as the limited edition Player Titles. To earn these titles, all players need to do is to climb the Ranking ladder and obtain the No.1 spot by the end of the Raid Season. There are 2 Global Rankings players can partake. The first Global Ranking is Raid Boss Count, which is how many Bosses were slain by you alone. The second Global ranking is Raid Aid Count which measures how many Bosses were slain with your assistance.

We too have a ranking system for Alchemia  Ports. If you think your Alchemia Port is the strongest, show us! Work as a team and climb to the top of the ranking ladder. Fantastic rewards will be awarded to Alchemia Ports who performed the best. So work hard Alchemists!

We hope that the new Raid feature will ignite that spark in you to overcome the seemingly impossible odds. We want to see all of you victorious in the end and you will no longer need to face big obstacles alone. You will always have friends and partners to help you achieve that victory. Show us that courageous spark and defeat the obstacles that block your way to victory!

Until then, be seeing you at the Door of Truth, Alchemists.