Why We Need A New Road Rash


Why We Need A New Road Rash

The Road Rash series is about motorcycle racing.Â  It's also about fighting other racers and police with clubs, chains, brass knuckles, tire irons, and when the occasion calls for it, well placed kicks.Â 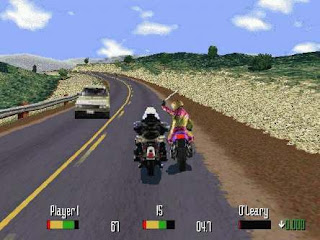 It's a series that started on the Sega Genesis, and only improved when it moved to 3DO in 1994.Â  The series reached its technical peak with Road Rash 64 on the Nintendo 64.Â  Unfortunately that's also where the series ended.Â

Developer Bottlerocket was working on a prototype for a modern Road Rash when the studio closed a few months ago.Â

A new Road Rash isn't just a cool idea; it's something we need.Â  And here's why:

A lot of people would put Road Rash in the racing genre because the goal is to be the first to cross the finish line.Â  But Road Rash is actually more of an action game that it is a racing game.Â  For one thing, each course consists of a single lap rather than multiple laps.Â  Also the player can get thrown from his cycle (in some of the versions) and be forced to traverse on foot until he regains his ride.Â

At this point you might be thinking that it sounds pretty similar to the Grand Theft Auto series.Â  Afterall, in multiple Grand Theft Auto's you race a single lap on a motorcycle, Â and you can get thrown off your bike.Â  But Road Rash is different because it doesn't test your driving ability.Â

The majority of the challenge in other racing games, even those with combat elements such as Burnout and Grand Theft Auto, is traversing the track at maximum speed without crashing into the walls.Â  The competing drivers are an ancillary threat.

But in Road Rash the combat with the other drivers is the focus.Â  The tracks barely curve at all.Â  This differentiates it from every racing game on the market. The game is about hand-to-hand combat.Â  The speed of the race and the occasional object in the road are there to make the combat more interesting.Â

This brings me to my next point...

So if Road Rash is really an action game and not a racing game, what makes it stand out as an action game?Â  The answer is that in Road Rash, the environment is fundamental to the combat.Â

This is an element that modern action games lack, but that 2d action games are based on.Â  If you take a look at your average boss fight in a game like Megaman or Castlevania, positioning your character in the right place relative to the environment is a huge part of your success.Â Â  Being on the right platform can mean the difference between life and death.Â

Compare this to modern action games such as God of War, Prince of Persia, Ninja Gaiden, or Zelda Twilight Princess.Â  The combat arena in those games is basically a giant cube.Â  Positioning your character is important relative to the locations of your enemies, but not relative to the physical environment itself.Â  You can use the same strategy on an enemy type over and over because the playspace never changes.Â  You're always fighting on a flat surface.

But in Road Rash, the environment is integral to the combat.Â  A typical tactic in Road Rash is to force your opponent to one side of the road and then kick his bike as you approach a telephone pole.Â  Kick him too late and the pole will pass by.Â  Kick him too early and he'll have time to avoid it.Â  Kick him just right and you'll have one less opponenant to worry about. But you can only rely on this tactic when there's a telephone pole in the road.Â

The constant changes in the landscape require you to constantly modify your tactics.Â  A good player will take advantage of the buildings, cars, mailboxes, street fixtures, and the changes in the road itself as they present themselves.Â  And when they do the results are often spectacular.Â  This brings me to my next point.

3...Because the "Wow" moments happen naturally

Road Rash's spectacular moments all occur through the natural course of the game.Â  They aren't scripted setpiece moments like when a giant monster blows through a wall in Gears of War or when a helicopter gets shot down in Call of Duty.Â  They aren't quick-time events like when you decapitate an Ogre by pressing triangle, circle, triangle, square in God of War.Â

All of Road Rash's incredible moments are the result of a physics engine combined with unpredictable AI, and an even less predictable player.Â  This gives the game a sense of life and infinite possibilities that make you feel like you're experiencing something new rather than just viewing the same identical moments as every other player.

There are few things that can compare with the cool factor of putting a tire iron in the spokes of an opponent's motorcycle.Â  In Road Rash 64 this would result the motorcycle and its rider flipping through the air, end over end, and then careening into the ground.Â  Hand to hand combat often ends when someone kicks his opponent's cycle into a parked car hurtling the rider into the air and toward a devasting bounce off the pavement.

It's true that racing games like Burnout and Motorstorm have these same types of dynamically-generated "wow" moments, but modern action games tend to rely on canned moments instead.Â  And, as I've said, Road Rash is more of an action game than a racing game.Â

But why do we need a NEW Road Rash?

I'm generally not a fan of remaking a game for the sake of remaking it.Â  Some games have had their day and really don't need to be modernized (Golden Axe and Splatterhouse I'm looking at you two).Â  But Road Rash's gameplay hasn't been taken to its full potential, and so a modern update is needed. Â Â Remember, the most recent Road Rash was on the N64 (pictured above), so there is a lot of room for improvement.Â  Obviously a new Road Rash would have better graphics, online play, and aÂ  modern physics engine to make the "wow" moments even more spectacular. Â  I'd also like to see more racers on-screen and more obstacles on the roads (pedestrians maybe).

The melee combat system could also be upgraded to allow for advanced moves such as blocks, combos and counters.Â

Gunplay would be a welcome addition.Â  The last Road Rash came out long before Halo popularized the use of the right analog stick for aiming.Â  There's no reason to think it couldn't have that function in a modern Road Rash.Â  Imagine tearing down the street on your hog, single-barreled shotgun in hand Arnold Swarzenneger-style!

I'm sure that's just scratching the surface of what a modern Road Rash could be.Â  If done right, a new Road Rash would give the videogaming world a shot in the arm.Â  So let's get moving.