I'm a big hockey fan. This year, EA Sports announced a big new addition to its hockey sim stalwartÂ NHL 13: a new "true broadcast camera" angle! As realistic as theÂ NHLÂ series has become, the most glaring difference between real hockey on TV and virtual hockey is the camera orientation. While most hockey video games usually useÂ a vertical angleÂ to replicate the players' perspective, TV broadcasts useÂ a horizontal viewÂ to create more of a balance between teams' camera space. So does it work inÂ NHL 13? Not really. The horizontal perspectiveÂ makes local multiplayer easier since neither human-controlled team has to be going downwards, but for standard single-player and online gameplay, most players will stick to the vertical angle.Â NHL's analog stick controls were built around the vertical view, and the developers knew this: despite touting the true broadcast camera in marketing, the default settings for the game are still set to the classic vertical view. 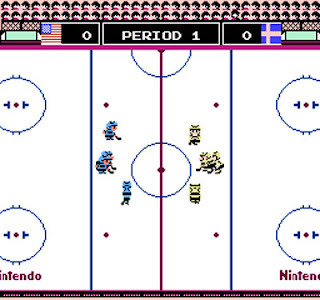 It hasn't always been that way. Konami's 1987Â Blades of SteelÂ and Nintendo'sÂ Ice HockeyÂ the following year (pictured here) were two of the most influential 8-bit sports video games, and they both featured the horizontal perspective.

But as soon as EA Sports got into the game withNHL HockeyÂ in 1991, they introduced the vertical camera to hockey gamers. It's been the standard angle for hockey in video game form ever since.

What about other sports? On a basic level, soccer (football) has many similarities to hockey: two teams trying to score on each other's net, guarded by a goalie. But strangely enough, after going through a few changes (includingÂ an isometric viewÂ in 1993'sÂ FIFA International Soccer),Â the industry standard todayÂ for soccer video games is the horizontal perspective.Â Basketball gamesÂ have settled on this angle as well.

Hockey isn't an anomaly, though. One of the best-selling game franchises in the United States,Â Madden NFL,Â uses the vertical angle. While the angle inÂ NHLÂ remains the same throughout the duration of play,Â the camera inÂ MaddenÂ actually makes a 180Âº flip whenever the ball changes hands. This is easier to accomplish in (American) football because possession doesn't change nearly as frequently as it does in hockey. 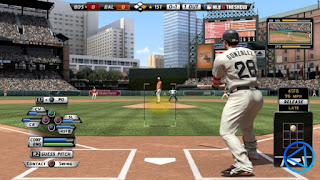 Baseball is a league of its own, due to the sport's asymmetrical gameplay. While the standard camera angle for batting is behind the batter (instead of behind the pitcher, as it is in TV broadcasts), it matches television angles when the ball is in play and the game switches to a wider angle of the action.

So will hockey video games ever change full-time to the "true broadcast camera"? Even if you're not a sports fan, we can all learn something from studying sports games' approach to the camera. Capturing a game within a game--adapting an existing real-world game to video game form--presents a huge array of philosophical questions for game design. It boils down to balancing what's best for gameplay with how to best simulate the real world events players are already familiar with.

[Also posted on my personal blog, A Capital Wasteland]