For some reason, Iâve had a lot of trouble finding an artist who would be willing to work with me on my indie game Energy Hook. I canât imagine why - who wouldnât jump at the chance to work really hard on someone elseâs game for no pay? Although some brave artists like Paul Whitehead, a fellow Treyarch ex-pat, volunteered to do a little part-time work here and there, for the most part I was on my own.

So I wondered, could somebody with almost no art skills to speak of make a game that people might be willing to back on Kickstarter? I figured, probably not, if the game looked like this: 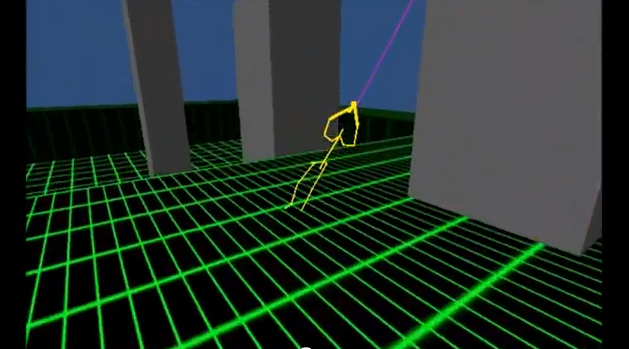 Still, left mostly to my own devices, I managed to get the game looking like this:

Which I thought wasnât bad for a non-artist, and backers on Kickstarter seem to agree.

Since the game takes place in a city, and there are a ton of city assets in Google Warehouse, it was a match made in heaven. But Iâve also found jetpacks, boots, gauntlets, antennae, water tanks - Google Warehouse seems to be a place you can go for free assets of all sorts, and maybe I'm not the only one who can find the assets one needs there.

The problem is that almost everyone says, âDonât Do That.â And their reasons are good ones:

But those problems can be mitigated, and the advantage of being able to rapidly create a game even without an artist on hand is too good to pass up. So this is a viable method of level construction for a variety of uses:

Doing this is unfortunately not appropriate for mobile development - even with Unity Pro, the performance of these assets are simply not good enough for mobile.

First off, the big question is how do we mitigate the performance problems? And, unfortunately, part of the answer is to use Unity Pro, which costs $1500 a seat. There goes our shoestring budget. We have to use Unity Pro because Unity Pro has a âstatic batchingâ feature that takes SketchUpâs pile of tiny, inefficient meshes and batches them together into larger, more efficient meshes that use fewer draw calls. The improvement in framerate I witnessed when I migrated from Unity Free to Unity Pro was staggering.

You can tell the static batching is working if the âbatchedâ statistic next to the Draw Calls shows a nice big number. (And your framerate doesnât suck.)

On the bright side, you can try Unity Pro for free for a month, and use that time to decide if static batching + SketchUp assets is right for you.

There are a few other techniques you can use to improve performance still further:

You can simplify the assets and delete extraneous parts of them from within SketchUp.

You can use a free tool called PlayUp to export your assets from SketchUp. PlayUp is much better about combining submeshes than the default Unity exporter is.

You can use tools like MeshBaker to combine your meshes and textures into single models that take fewer draw calls.

My approach to copyright has been twofold:

Texturing is the hardest problem to deal with. Paul teaches a class on texturing at DigiPen and tells his students, âThere are no shortcuts.â Here there are three options:

There are two ways to export a model from SketchUp into Unity, both with drawbacks. Thereâs a public domain tool called PlayUp designed to let you bring models from SketchUp into any engine. The advantage of PlayUp is that it creates more efficient models that use fewer draw calls, and if youâre using Unity Free is definitely the way you should go.

The disadvantage of PlayUp, Iâve found, is that it often fails to get the texture UVâs correct. So, since Iâm using Unity Pro and therefore donât need the efficient meshes, Iâve been using SketchUpâs built in exporter.

Iâm describing using SketchUpâs built-in exporter below, but thereâs something to be said for using both! Use the built-in exporter for your static meshes that will be batched; and use PlayUp for dynamic meshes (assuming it keeps their UVâs intact.)

After some experimentation and some dead-ends, here is the process I eventually settled on for populating New Atlantis with stuff. This assumes familiarity with SketchUp and Unity - if youâre new to either of those products, there are plenty of tutorials to get you up-and-running - Iâd recommend spending at least a couple days with each before tackling this.

So, maybe I decide I want to have a wind-farm in my level. So Iâll need a bunch of wind turbines.

Now I switch to Unity. If Iâve done everything right, it will automatically load the new asset into the project folder, but I want to tweak some settings before bringing that wind turbine into our level. 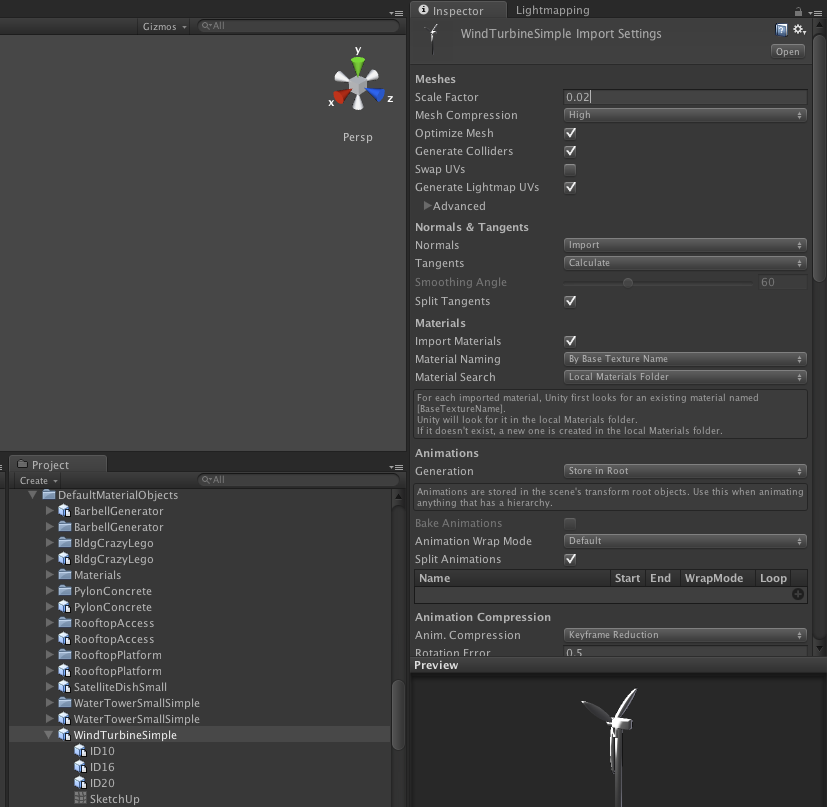 Now I can use that prefab all over the level - I can also, usually, scale it (within reason - texel density is still an issue here) and even flip it across its axes, to create a variety of instances from a single batchable model.

The way Iâve mostly been cleaning up my SketchUp modelâs textures is to either get rid of them entirely, have them map into a giant palette texture that Paul provided, or increase their resolution and then apply certain artist effect filters to them in Photoshop or Gimp. A cut-out or oilify texture fits our worldâs cartoony look much better than a muddy photograph. Itâs tempting - and easier - to do this on the Unity side, in the assets folder, but then if I decide to make changes to the .SKP model, when it re-exports the textures it can write over my work.

Another drawback to SketchUp is that it stores the texture information in the .SKP file instead of in separate, easy-to-get-at image files. To edit SketchUp textures, I have to go to Preferences->Applications to set which image processing app I wanted to use, and then in the Paint browser, click the drop-down to find âColors In Modelâ - only from Colors in Model can I then right-click on a material, select âEdit...â and make my improvements. 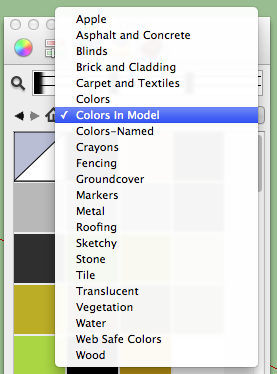 Another thing I do in places is replace the modelâs materials completely - sometimes going with flat-shaded materials, other times using stock materials from the asset store, and once in a blue moon drawing my own texture.

This is another way to give different instances of a model their own look, but itâs important to remember here that new materials mean new Draw calls - if I gave every instance of a model its own materials, the static batcher would no longer have anything to batch.

Is âStockâ A Bad Word?

So, thatâs what Iâve been doing, and now you can do it too. Feel free to get in touch, ask me questions, tell me better ways to do things, and show me what you come up with!

One thing I didnât mention: working this way is fun as hell. I love the feeling of raw creativity, of being able to get an idea and make it happen that day. I feel like Phineas saying to Ferb, âI know what weâre going to do today,â and doing it. Such a change from game development ten years ago, when we had to walk uphill both ways in the snow.

On the other hand...

Ever seen the Metallica documentary, Some Kind Of Monster? They used the word âstockâ like it was the ultimate artistic sin. âHow does this riff sound?â âStock.â

More than half of Energy Hookâs assets, at the moment, are stock. It would be easier for me to tell you which objects arenât stock assets than which are. Even our protagonist and her animations are stock assets. Some other game developers with good eyes have called out some of my assets: âHey, thatâs the default Unity skybox!â I changed it up a bit, but yes.

And Iâm not currently not sure how much Iâll be able to replace with lovingly artist-created assets and how much will remain in the final product - it depends on how much money the Kickstarter raises.

Basically, making a game like this with no budget to speak of means I have to embrace âStock,â at least for now. Itâs taken me a bit of getting used to, coming from a AAA background where everything was original. But other than that skybox, so far people seem to be quite happy with the final product. And hey, I can enjoy a movie even if it has the same actor as another movie, or if it has the Wilhelm scream. Not to mention I liked Metallicaâs early stuff a lot better, back when they didnât mind stealing a riff from, say, Diamondhead or Budgie.

Hey, almost everything is remix / mash-up / kit-bashed. I think the really important thing is that your conglomerate creation is still original, still yours - itâs more than the sum of its parts. And if you think so too, back my Kickstarter or vote up Energy Hook on Greenlight!