This article was first posted to the Canadian Media Fund's Trends online magazine and analysis website, and is in part derived from the Funding What When lecture at GDC 2018's Indie Game Summit.

“I’ve got all the money I need to finish this project,” said no game developer, ever.

Project financing is a constant challenge to many game developers across the globe. Sources of funding always seem to be too few and far between, or not well suited to the peculiar challenges of game production. Aside from a small cadre of game savvy investors, in general, most are not well versed in game economics nor skilled in assessing project risk. And, none of these hurdles are aided by the fact that most game developers simply lack experience or training on the business side of things.

You are creating this wonderful amazing beautiful fun game, and dammit, the problem of not having enough funds, is just such a pain in the butt.

And so, industrious game developers set out into the world to solve their lack of funding problem, well, as a problem. Sadly, no one cares.

Approaching funding as yet another problem to solve amid all the complexities of making and shipping a game, may seem logical and pragmatic, but it sets the effort on path of imminent doom. First and foremost investors are looking for great opportunities. They are not in business to help you solve your lack of money problem.

Game developers would do well do completely reframe their funding efforts as an opportunity, as opposed to trying to solve their missing money problem. This requires that the project you are working on is a legitimate opportunity. That usually means that the game has commercial potential – and is of course a wonderful amazing beautiful fun game.

How do we know if a project has commercial potential? For starters, have you done a market analysis and looked at your competition, mapping out their performance? Have you already started building community or had strong traction from actual players? Does the game design itself have hooks for discoverability and streamability? Do you know who your target audience is and how to reach them cost efficiently? Does the production budget make sense relatively to the earning potential of the game?

Of course, any project is a gamble. We can do our research to increase our odds of success, in part by better understanding what is – or is not – selling and trying to understand how the market evolves and shifts over time. It is better than just taking random shots in the dark. Alas, hope is not a valid business model.

Now that you’ve determined that you have a legitimate opportunity in hand, what are the typical sources of project financing for games?

You!
Depending on context, this could be your day job or past savings in a more personal project situation. Or, it could mean taking on work-for-hire contracts or reinvesting profits from past projects, in a studio context. Essentially, all the cash you, your partners, your company are able to put on the table.

Love Money
Any source of funds from someone who loves you. Your parents, or spouse, or best buddy, etc. Often this is done as a gift or a loan with very soft terms (potentially making family holiday dinners awkward). Though, can be done as a revenue share based investment (see royalty investment below).

Publisher
Love them or hate them, publishers are still the largest source of game financing in the world. Thankfully, the funding comes with some extra perks such as marketing firepower, product expertize, porting capacity, platform connections, and so on.

Crowdfunding
While running a successful Kickstarter campaign is no walk in the park, crowdfunding remains a viable option. (As the most popular crowdfunding platform for games, in 2017 there were 347 successful campaigns, generating over US$16.5million in funding.) And, you have the added benefits of not having to pay out a revenue share (though, the cost of mailing out a bunch of t-shirts can be quite a financial burden) and a loyal list of new “backers” rooting for the project’s success.

Government Programs
Depending where you live, different grants and governmental funding schemes may be available to you. From small $10k young entrepreneur support grants to juicy tax credits to matching funds for the development of new IP, be sure to explore the options in your region.

Platform Support
Being in the right place at the right time can pay off. New hardware always needs new games (like when Sony was ramping up for the release of PS VR, many developers got funding for their cool VR games). New distribution platforms need exclusive content to pull in users. This one is quite hard to plan for, but can be a blessing if you’ve got something that lines up.

Royalty Investment
As the name implies, this is an advance against future revenues of the project. But, unlike a loan, the investor gets to participate in the upside (and not just get recoup + interest)… though it also means the investor can lose their money if the project fails to deliver. This is a format usually used by friends and family who are a bit more willing to take on risk.

Pre-Sales
As made famous by Minecraft’s millions in sales during alpha, selling a pre-release version of your game to help generate funds to continue development is viable if your project is far enough along. Now quite common using Early Access on Steam. Be careful, this doesn’t work for all types of games, and is usually best suited for multiplayer, non-linear, endless type experiences. The added bonus with this source is that the funds come directly from paying customers, allowing you to grow your community and get feedback to improve the game.

Festivals and Contest Prizes
Many festivals and contests around the world have cash prizes. For example, the IGF’s Seumas McNally Grand Prize comes with a US$30k cash prize. Perhaps not wise to plan your budget around the chance of winning festivals, but certainly a nice perk to leave an event with fame, glory, and a few extra dollars in your pocket.

Importantly, banks are not being listed as a source of project funding. For the most part, they view games as too risky, especially if being developed by startup or young indie studios with no existing cashflow or assets/collateral. Of course, different story if you are a going concern and want to set up a line of credit, or bridge tax credits, etc.

A Note on Company and Non-Commercial Sources

And what about VCs and angels? Or art councils and foundations?

VCs and angels invest in companies. They are buying equity and becoming a long-term partner in your business with the expectation that you will build tremendous value in the company over time, eventually leading to an exit. This often requires that you are working on games that have exponential revenue potential (think Fortnite, League of Legends, Hearthstone, Rocket League, Clash Royale) and usually implies games-as-a-service. If you are not gearing up for building a massively scalable business, then don’t waste your time looking at company oriented sources of funding. Sadly, studio level investing is too deep of a topic to properly address in this post.

Conversely, if you are working on something that is intentionally non-commercial in nature and has some other intentional objective in mind (e.g., raise money for a charity, advance medical research, empower a repressed community), you can look to art councils, museums, foundations, research agencies, and other groups that align with your mission who may have funding programs. Alas, these intentionally non-commercial sources are extremely unlikely to fund your awesome ninja battleroyal game.

Now that we know all the possible categories of game project financing, we need to consider the typical timing of each source. Sadly, we can’t just collect a big bag full of money whenever we want to. Understanding the sweet spot for each source is critical. 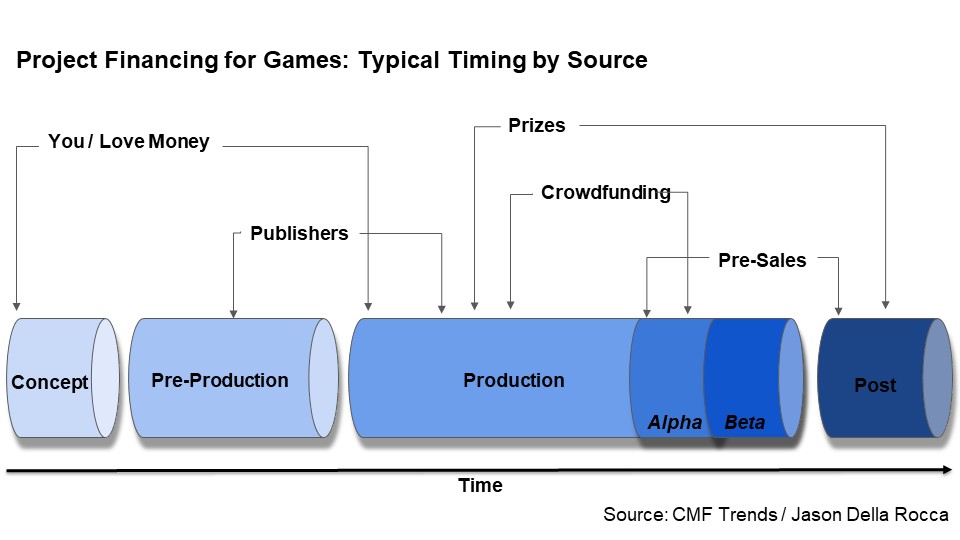 The above graph represents a typical game’s development timeline (though, the Production segment often would stretch well beyond the border of this page). During the early stages of a project, as you are concepting and working toward a prototype, “you” are the most likely source of funding, or love money. In part because the funding amounts are relatively low in this phase, but also because only you, or someone who loves you, is crazy enough to invest when you have yet to build traction and prove viability.

Many publishers like to get involved in projects once they are deep into pre-production or early in production. This usually means there is a strong prototype that proves the game’s fun factor, and the team has a more calibrated sense of the effort to deliver the whole game. It also gives the publisher enough time to ramp up their marketing efforts, and plan out QA, localization, and porting schedules.

As the project matures and stabilizes into production, you can start to enter festivals and competitions. The focus here really should be more so on marketing and community development efforts, but sure, taking home a cash prize is always nice.

The timing window for crowdfunding is shifting later and later into production. Whereas five years ago, you could possibly succeed with a strong concept and very early assets, now backers need to truly believe the game will ship and they place much greater burden on the developer to be well advanced into production. This is not even mentioning the fact that most successful campaigns take 9-12+ months of community development work ahead of time!

Pre-sales efforts are best timed during your beta phase, or sometimes as early as alpha. Of course, the more robust and stable the game, the better your chances of generating revenue during pre-sales.

The other sources of funding outlined above are somewhat less sensitive to timing (e.g., royalty investments), or have very specific deadlines linked to programs (e.g., government funding scheme) that are too variable to list out here.

It is quite rare to collect the entire budget of a game in one shot. It normally takes a layered approach: you invest your time and energy in the concept, then borrow a bit of money from your uncle to complete a prototype, then head out to GDC to score a publisher, who then funds the completion of the game and pays for marketing and console ports. Or, a thousand other possible permutations… The key is to be mindful of where you are in your production timeline and match the sources of funding with your timing for optimal effect.

And, critically, always be pitching an opportunity and not your lack of money problem.

Head of Product for a new F2P Mobile Game