Indies On Tour - How we escaped the office, and discovered the world


In November of last year, we launched Owlboy to some insane reviews, and having just crossed 100.000 sales, we've started to pick up our promotion efforts around the world! Starting with a journey across the States!

And phew, that was SOME journey! We showed off Owlboy at DICE, GDC and SXSW, where it won the Gamer's Voice Award! Using our merch-girl's tiny Kia Sportage, we've been on the road for 2 months!

BUT, WHY are we spending this much time on the road? Why would any dev spend their precious time doing promo-tours, in this age of connectivity? Promoting your game is as easy as posting about it on Twitter right?

In this post, I'm going to touch on why we've become addicted to travel, how it has impacted Owlboy's development, and try and figure out if it's been a worthy investment on our part. I'll share numbers, costs and tips on how to fund your travel. 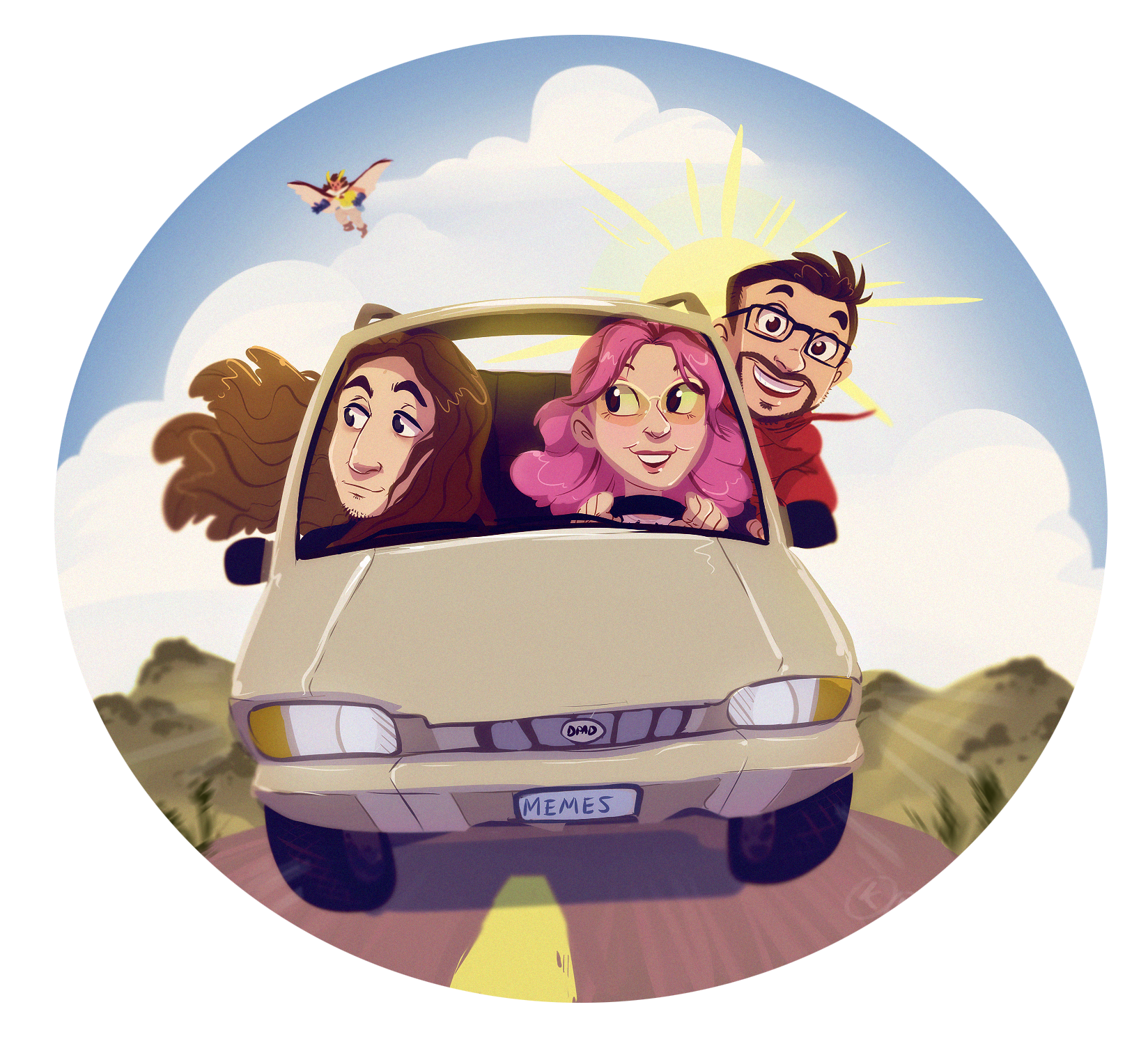 Let's go back to the beginning. One major reason why we started journeying across the sea was simple - Back home, NOBODY cared about our game. We first started showing Owlboy around in 2008 (even before I joined the team in 2009).

American press picked up on it immediately, while in Norway - the game would remain unknown until our debut in Norwegian newspapers back in 2011. We immediately realized Owlboy's international potential once it got nominated for the IGF in San Francisco. We've been traveling to San Francisco annually since then. 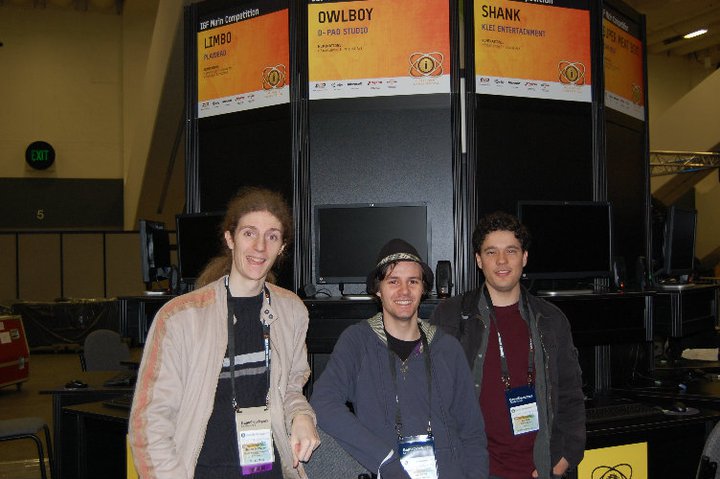 Having convention goers, developers and press show genuine interest in the game made us believe in ourselves. Not only were we able to promote it, but we felt like people were listening to us, seemingly understanding what our game and team was all about. I immidiatly set out to discover more venues!

Since getting nominated to IGF, I've been actively seeking out conferences to attend. Below is a list of some of the events and festivals where we displayed Owlboy:

(Recently I discovered PromoterApp, a calendar for any important deadlines or events that might interest budding developers!)

I got so addicted to showing our games off, I started arranging my own indie booth in Norway to help spread some love for our neighboring devs, and give them the same shots we had. We called it Stand Indie. 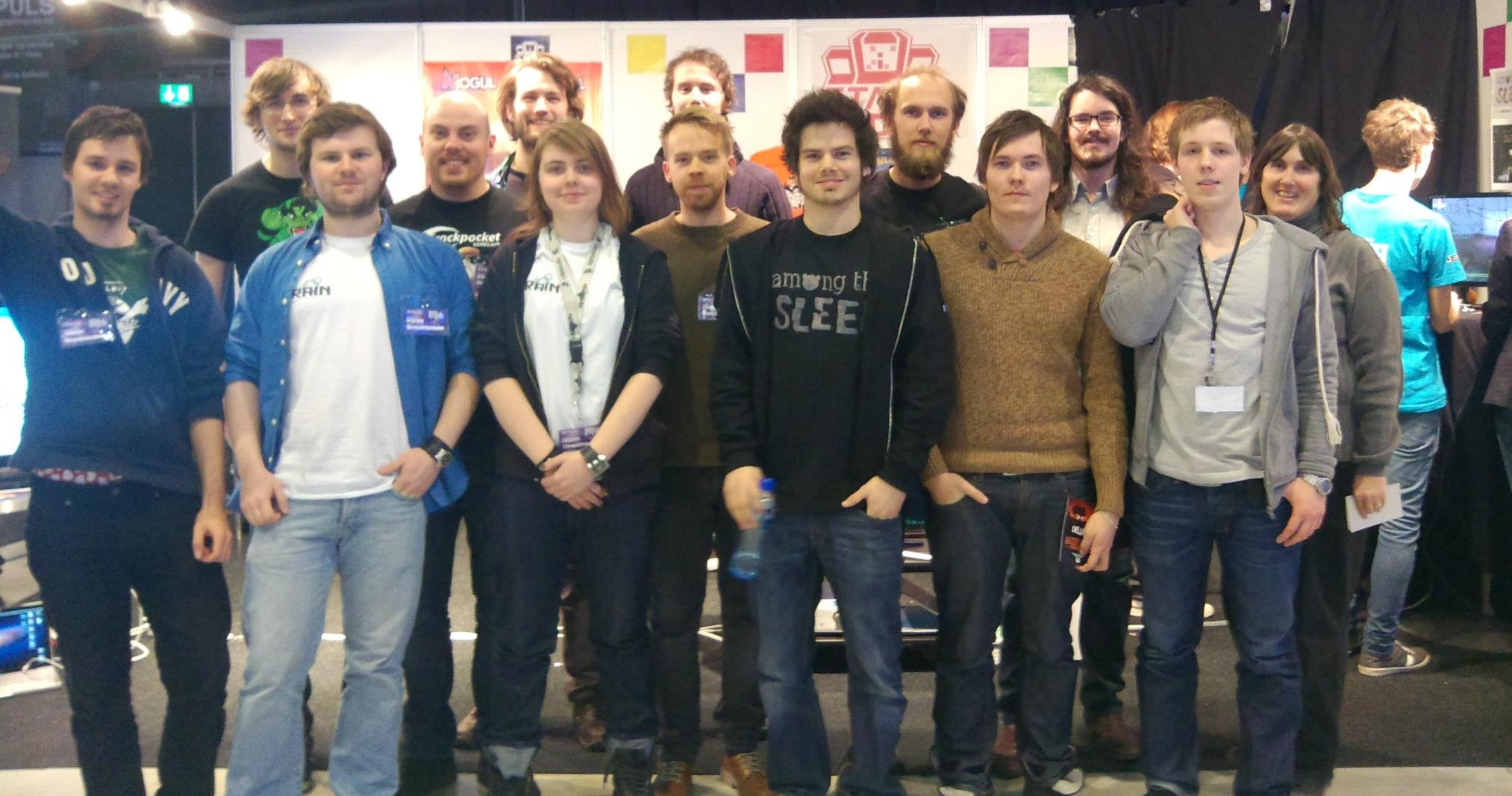 Stand Indie at SpillExpo 2012. It became a major success, and indies has been a part of SpillExpo ever since.

Later years, I've been too busy with development to help out, but now that Owlboy is released, I aim to get back in the game, starting with a roadtrip through Norway!

But none of our travel had been possible without friends. Meeting new developers, and talking to them or adding them on social media helps you stay in the loop for whenever new events are happening. I would have missed half the events we ended up going to, hadn't it been for reminders from fellow devs.

Below is a list of dev groups I recommend following (I'll keep this list updated as I find more):

It's hard to tell what we've gained from traveling around - especially in the form of exposure and sales. One thing I know however, it's helped boost our working morale something fierce! There's something about seeing players experience your game first-hand, and getting real-life feedback.

Each time we've come home from manning a booth, we've returned with notebooks full of useful tidbits. Heck, we added an entire new dungeon based on feedback from IGF players, whom had struggled with the controls.

Travel is never cheap, but we've found ways to help us save some coin. For GDC, we've always made sure to book hotels in the neighboring town of Oakland, and commute to San Francisco.

One other great tip is to get your trip funded. Whenever we went to GDC forexample, we've always tried to be part of a presentation or panel, so that our lodgings got taken care of. It also helps to be prepped way ahead of schedule. Start looking for events today, and you're bound to find some that'll fit in your schedule.

Simon's talk at GDC - The Motivational Power Of Inspiration.

My own country, Norway, also has a brilliant travel fund for students and industry professionals, to which I always apply. Keep your eyes and ears open for opportunities that present themselves, and never think: "No way we'll get nominated/funded/selected".

I think most countries has some kind of funding instances. I'm more than happy to create a list of funds in different countries so feel free to tweet them at me.

Now let's look at real costs for a moment. A typical journey costs us about:

We're usually at least 3 folks traveling, so it adds up pretty quickly! Luckily, we've had few regular expenses other than food, and we've always made sure to set aside extra funds for travel.

Let's try and find out what our expenses has gained us, both short-term and in the long run. Below are examples of what we've gained from our travels:

Looking at this list, it might seem like we didn't gained much compared to the costs, BUT, we aim to stay in this industry for a long, long time. Gaining fans, contacts and friends are great, as they'll follow the development of future titles (or even read your long-ass blog posts).

While it's impossible for me to convert travel into sales, the long term gains are extremely valuable.

Press is one thing. Since I'm a developer, and because we're a small team, talking to press feels way more rewarding than directing them to a publisher, or a marketing guy. I know the backstory and all the dirty details on the game. Whenever you talk to 'D-Pad Studio', you are talking to the guys who created the game. This way, it'll be way easier for us to spread info on our coming projects! 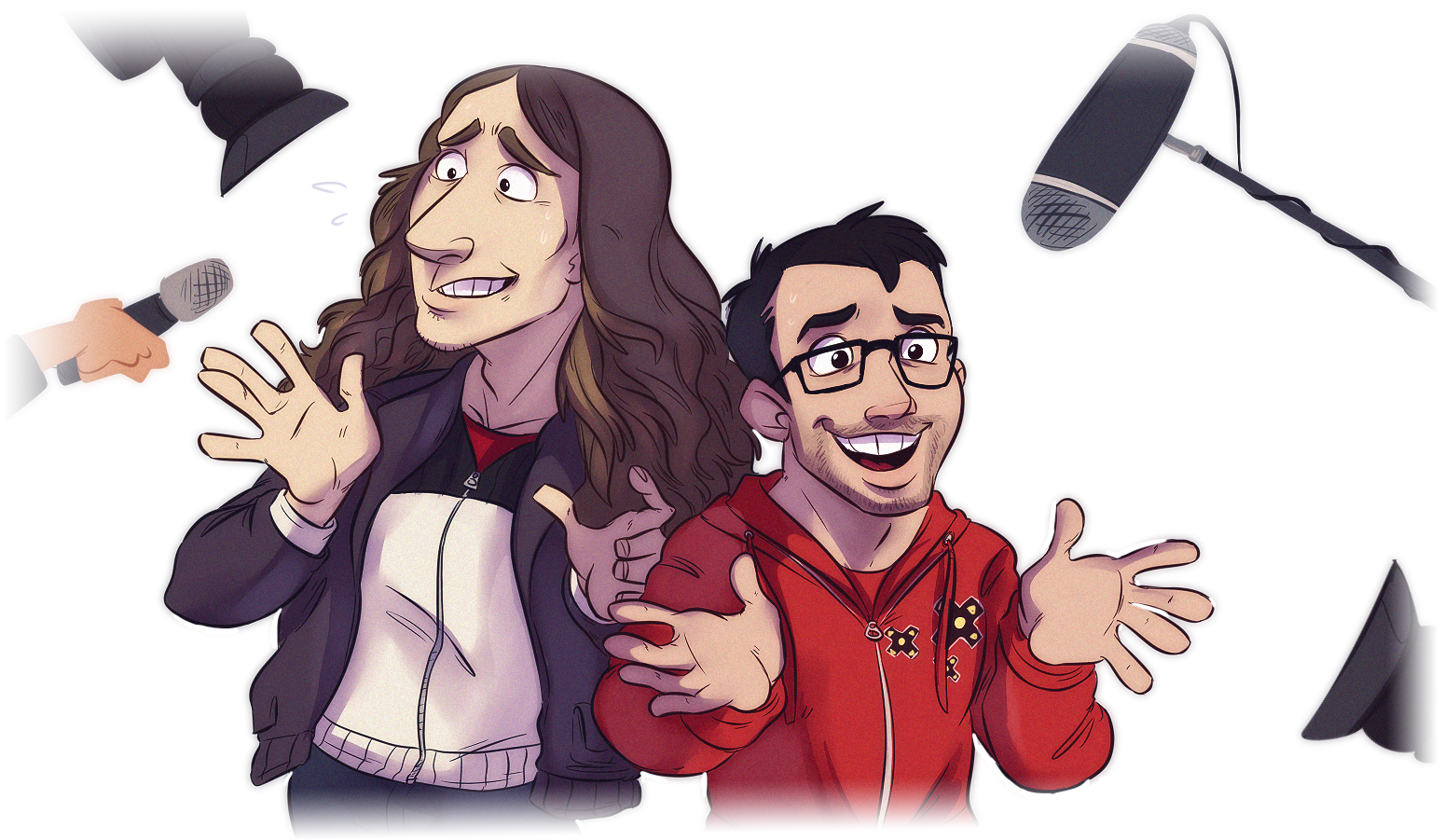 While parties are a great way to connect with new people, I always prefer talking to people one-on-one, that's just the way I'm built (maybe it's a Norwegian thing?). But parties are great for meeting people you might like to talk to later. When out traveling, always carry some business cards, or even printed codes for your game - anything that clearly states which game you're working on.

BUT, my absolute top recommendation for traveling is that your brain gets a chance to disconnect from "working". I've never been able to sit on my computer and "work" on coming up with new ideas. Our greatest new ideas has come from just loitering around an airport, or sitting on a train. New ideas usually spring outta nowhere, but I find that during travel is when my creativity runs on it's own.

When I started working with games, I had no idea I was gonna travel the world. I was picturing a nine-to-five job on a computer. Travel has become part of how we maintain our business, morale, and creativity!

Our latest booth marked the first time we've displayed Owlboy post-launch! We jumped at the opportunity to try our luck as sales-men! Not only did we manage to sell t-shirts and buttons, but more than a few expo-goers were eager to purchase the game!

As an added incentive, I made sure the game was on a 25% discount on all digital stores for the occasion. It worked like a charm!

Roughly calculated, I think we earned back what we spent on travel, and it prompted us to come up with new ideas for our next booth! It makes a huge difference to finally be able to talk about Owlboy in past-tense. 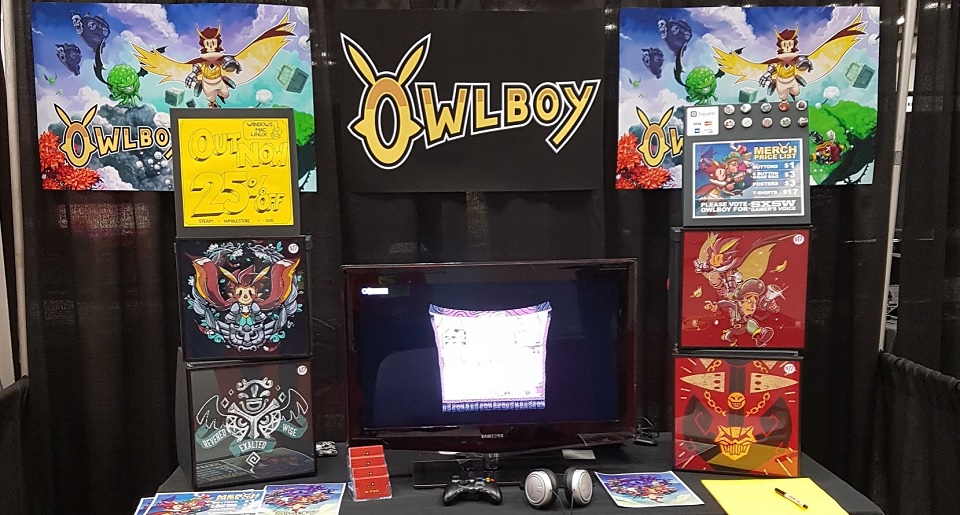 This is the first booth where I've heard Simon utter the words "Wow, this is actually starting to look rather professional".

A few tips we've picked up from manning our own booths:

It's always a good idea to display the logo of your game very visibly. We got comments from expo-goers who'd spotted our booth from the other side of the convention hall! Posters are cheap to print at any FedEx Office with access to copy machines.

Business cards are a given, but also make sure to display them properly, and even print your game-art on there. People are more prone to recognize your game logo, than your company.

Also, hire a guy who KNOWS how to sell. your. game! Often, I find myself hard pressed to try and sell Owlboy, cuz, well, we're the architects behind it. As devs, we are inherently awful at selling our own product, because we tend to point out all the flaws in our work.

We've been lucky enough to be graced with a friend who does sales for a living. Here's to you Noah! 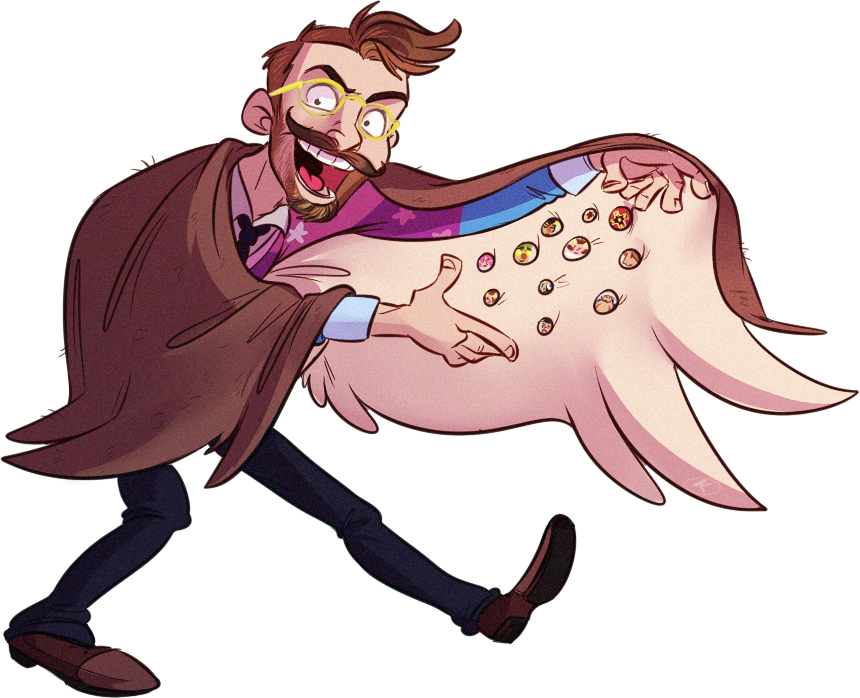 While we're far from experts, we've spent nearly 10 years of travel and attending conventions. We've seen the effects of displaying our work, and doing presentations, interviews and greeting fans with our development woe stories has sort of become second nature by this point.

Sitting on my computer and knowing we'll soon be on the road again, fills me with glee. We get to see the reaction of our players first-hand. We get words of praise, or constructive critique (funny how criticism feels more grounded once it's face-to-face).

Our games have been shaped by the reactions of the people playing them, and is another reason why we decided to spend all this extra time in developing Owlboy. Soon, I will touch on ALL the changes it went through.

For now, we hope to see you on our travels!

Thanks for reading, and thanks to Konnestra who helped me touch up my blog with her illustrations. For travel tips, or if you want us to visit your fave convention - get in touch!
~ Jo