The Short End of Skyrim


Skyrim was one of the biggest CRPG titles released and indicative of where CRPG design has transitioned to. But CRPG design has changed in more ways then one and in a direction that isn't hooking me.

Reprinted from my site: Game-Wisdom

Recently I was gifted a copy ofÂ SkyrimÂ as I was told by many people that it was a game that I had to play. The Elder Scrolls series is one of the most highly regarded on the PC andÂ SkyrimÂ is considered the cream of the crop: An epic game where you can spend dozens of hours wandering around exploring the world. So then why after 8 hours have I seen enough?

Skyrim'sÂ design is a more refined form of previous Elder Scrolls titles and a shining example of the state of PCÂ RPGÂ design: In that the game isn't about sweating the little details but more about delivering an overall sense of exploration and story.

The systems are not meant to be focused too heavily on; you can't fully personalize your play style, as everything is based on the designer's intent. Due to the open nature of the Elder Scrolls series, leveling up is different compared to otherÂ RPGs.

Instead of having a general experience bar, each aspect of your character levels up with use: attack an enemy with a sword to increase your one-handed stat, getting hit increases your armor stat and so on. Raise your stats enough and you'll level up which gives you a skill point that can be applied to any of the categories that make up your character.

One area thatÂ SkyrimÂ easily improves on compared toÂ OblivionÂ is refining the leveling system. InÂ Oblivion, the game featured enemy scaling based on your level. The game also had more non combat aspects such as jumping. What ended up happening was that people who leveled the non combat stats would find enemies at a higher level then what their equipment or combat skills could handle.

Restricting the enemy scaling was a good move by Bethesda, and condensing the number of character aspects down helped to streamline it. However my problem with Skyrim's gameplay is that for all the character customizations, the gameplay is shallow. 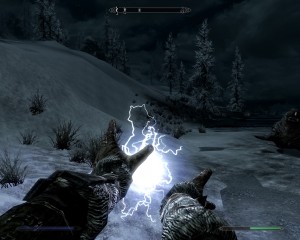 SkyrimÂ featured a wide variety of weapons, skills and spells to use. However the actual interaction was basic at best.

As mentioned earlier,Â SkyrimÂ isn't a game where the player can delve into the actual play mechanics or minute by minute gameplay.

Skyrim'sÂ enjoyment is about the long haul: Spending hours exploring every cave, dungeon, town and so on.

But when we look closely at the individual mechanics, we can see cracks inÂ Skyrim'sÂ design. Combat: which is what you'll be doing a lot is very basic. You only have a few basic attacks and movement is very floatly.

The key point aboutÂ Skyrim'sÂ gameplay is that it's heavily based on abstraction instead of player interaction. When you put points into a combat skill to make it do more damage or go through armor that has no impact on how you control in combat. You're still moving the same way and swinging the weapon the same, the only difference now is on the abstraction end.

Same goes for the game's variety of crafting: that allows you to make new potions, equipment, enchantments and so on. All crafting is done through menu systems with no interaction. Now to be fair,Â SkyrimÂ isn't the only game that keeps crafting basic. But this is just one example of how little involvement the player actually has in the world ofÂ Skyrim. 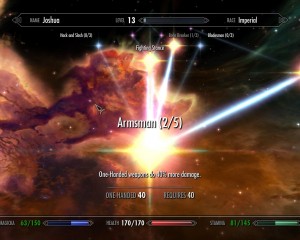 Skyrim'sÂ skill tree system was less about adding more strategies for the player, and more about affecting the abstraction at play.

If you look at a game likeÂ The Witcher 2, the base mechanics were more detailed thenÂ Skyrim.

Successfully surviving combat is more about the player skill compared to abstracted stats. And moving up one or all of the game's skill trees would change your combat tactics over time.

Before we move on to the next point, I want to touch on another general annoyance: the UI. I know that people have been complaining about the UI and have even made fixes with mods, but I do have to get it off my chest.

For a PC developer, I'm surprised with how poorly Bethesda designed the UI for a keyboard and mouse. Â No ways to easily group items and favorites, set up gear or spells for one key switching and lack of keyboard shortcuts are just a few of the many problems.

Skyrim'sÂ focus on general gameplay instead of detail is indicative of mostÂ CRPGSÂ today, but what really hurts the game for me, I can sum up in two words:Â Dark Souls.

Even though I preferredÂ Demon's SoulsÂ toÂ Dark SoulsÂ (which explaining why would take up its own post),Â Dark SoulsÂ was still one of the finestÂ RPGSÂ I played in 2011 (haven't bought the PC port yet) and a complete polar opposite of modernÂ CRPGÂ design. Where a game likeÂ SkyrimÂ is about the player exploring/storytelling first and gameplay second,Â Dark SoulsÂ was the opposite. Here we had a game that demanded the player to get involved with the mechanics to have any chance of survival.

Every weapon inÂ Dark SoulsÂ had a different feel to it, swinging a knife was different from a club or a sword and so on. Combat was of course more tactical because of it and the act of movement was important. Every enemy moved differently and had openings to watch out for. Along with a wide variety of offensive, defensive and support spells that can be used in and out of combat.

Contrast with the floaty nature of Skyrim which makes it hard to actively dodge melee attacks. Along with every melee enemy attacking with the same few patterns every time.

WhileÂ Dark soulsÂ lacked the wide world to explore compared toÂ Skyrim, the minute to minute gameplay was more involving. Â A ten second fight inÂ Dark SoulsÂ was more thrilling then any of the battles I saw during my play ofÂ Skyrim.

Now, whileÂ Dark SoulsÂ was an open ended game, it was still nowhere near the size ofÂ SkyrimÂ and this major difference affected the overall pacing. InÂ Dark Souls, it's safe to assume that the further you move away from the starting point, the more dangerous the enemies became. ButÂ Skyrim'sÂ world is completely open and players can basically pick one direction and go on an amazing adventure. 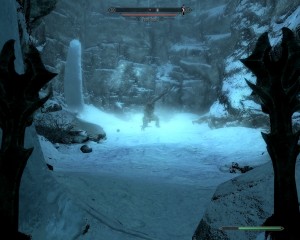 The art direction and environments inÂ SkyrimÂ were impressive, but the lack of depth puts it behind titles likeÂ Dark SoulsÂ in my opinion.

And that's what really kills me aboutÂ Skyrim, if the gameplay interaction was more detailed, with a world that big to explore I would love it.

But I've always been a systems man first: give me great gameplay above all else. I want to dig deep into the game mechanics and let me carve out my own way through it.

As an example, with theÂ RPG:Â Etrian Odyssey 3Â for the DS, the game allowed you to create a party of five from a variety of classes. Â One of my parties I made had no dedicated healer or spell caster, and I still managed to get all the way to the final boss with it. And that was from taking my time and figuring out just exactly how I wanted my party to be.

I reached my limit onÂ SkyrimÂ just before the ten hour mark, and the chance that I would spend 100 hours on it is slim at best.Â

Hopefully withÂ Dark SoulsÂ now available on the PC, it will give designers a shot in the arm to make more complicatedÂ CRPGsÂ that can fill a world with amazing gameplay and not just with places to explore.