A measure of a great video game is having a proper pace throughout the experience: Where the game is moving quick enough to keep the player invested, but not so fast that they start to fall behind either narrative or design wise. For today's post, I want to take a look at two extremes and the pros and cons behind front-loading your game or going the slow burn approach.

Front-loaded refers to titles that have zero to very little pacing in terms of introducing mechanics and usually give the player everything at the start. We can see this in games that are built around multiple systems like Strategy games or games built around an experience that keeps changing, such as in a Rogue-like. Â As a designer, you can't really space out mechanics when everything is interconnected, the design simply won't hold up.

The advantage of front-loading the design is that it quickly establishes the gameplay and allows someone to get right into playing the game. The problem with this is that you still need to figure out a way to properly explain the mechanics and systems to someone. Because the game itself is not set up to walk the player through the various mechanics, it's very easy for someone to have trouble learning the game when everything is given to them from the start. 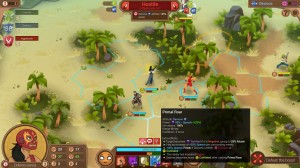 Renowned Explorers hits the player with a lot of systems from the start; making it hard to learn the game when everything is connected

My recent example of this would be Abbey Game's Renowned Explorers. It's a great game, but the developers definitely front-loaded all the systems and mechanics, making it hard for someone new to understand how to play.

The game features multiple interconnected systems having to do with party composition, equipment and the rules behind combat.

There is an in-game help manual, but that's not the same as learning as you play or what I calledÂ Organic Level Design. This is a game where you are guaranteed to lose on your first few plays, as you try to get your head around all the mechanics.

While front-loading your game is a great way to get everyone in and playing very quickly, you do run the risk of someone getting frustrating and giving up before they figure out how your game works. Many games that put everything on the table from the start tend to have a tutorial or beginner area to get new players accustomed to the rules of the world; you can see this in the Souls series for instance.

Moving on, we turn to the opposite end of the spectrum and what happens when things take too long to get going.

Slow Burn refers to titles where the design is intentionally (or unintentionally) padded out. In these titles, instead of rushing the player through to get them to understand the mechanics, the developer slowly introduces mechanics and systems over play. We tend to see this in casual games, where the game is meant to guide someone who is not necessarily an expert in the genre through the game.

The player may not see everything the game has to offer for hours, or unlocks everything and still has tons of stages to do of the same mechanics. The advantage of the slow burn is that it absolutely makes sure that new players will understand your game. The downside is that this can be a form of torture for experts who just want to get on with it and get to the good stuff. Whereas with front-loading and the player giving up out of frustration; here, the player gives up out of boredom and not wanting to waste their time.Â If it's not evident by now, Slow Burn games also fall into the category of titles where, "The real game begins at X." 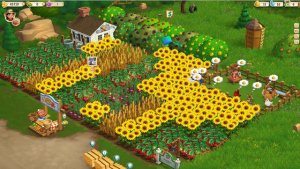 Casual games tend to go for the slow burn approach, to get as much out of limited design and maximize profit

The problem is that each campaign is 16 levels long and access to the full selection of towers takes a very long time. Because your main point of interaction is tower placement and strategy, expect to take a long time to get to the good stuff.

With Painter's Guild, the entire game is about performing the same tasks over and over again waiting for enough money to come in before upgrading and then repeating the process. If this sounds like a lot of casual social games, that's not a coincidence; many casual games are built around a slow burn, so that they can try to stretch the game as long as possible while earning money through microtransactions.

For me, I'd rather have games built around front-loading rather than a slow burn, because at least I can learn at my own pace, whereas the slow burn robs me of that.Â Because these two problems are on opposite ends of the spectrum, it means that there are different solutions in place.

To help get around slow burn or front loading issues, it all comes down to pacing. Starting with front-loaded, as mentioned already, having a tutorial section either as a separate entity or within the game space can help ease new players in. It's very important to have informative and easy to follow tool-tips, as the player is going to be learning the game on their own.

Another option is to have different difficulty settings so that new players can get a little more help without getting in the way of expert players. This is what Abbey Games did with the first patch for Renowned Explorers and is now offering both easier and harder settings.

Slow burn tends to be harder to get around and usually requires some creative design. One popular option is to allow players of different skill levels to progress differently at the same time. Two great examples of this would be Super Mario Galaxy and Gemcraft 2.

In Super Mario Galaxy, the level design is set up so that players of different skill levels can make progress without handicapping one or the other. Whether that's by collecting more stars faster or simply shortcuts for expert play, you're not forced to play through basic levels the same way as a newcomer if you don't want to. This goes back to anÂ article I wrote on Subjective DifficultyÂ and how the same level could be played differently depending on the person's skill level.

In Gemcraft 2, while it does have the slow burn like Immortal Defense, the Meta-game is far better and allows the player to be in control of their progression. Completing a level will award you with talisman pieces for passive upgrades, you can level up to add unique bonuses and the game also lets players alter the difficulty level; either making it harder for more rewards or easier for less. That way, the player is in control of their progression and that is a far better alternative to just padding out levels with the same gameplay. 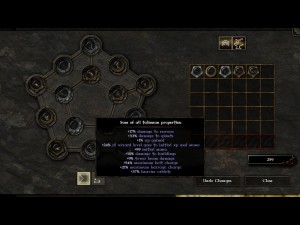 Despite having a slow burn, Gemcraft 2's elaborate Metagame provides a great motivator to keep playing, even though the levels don't really change

Another option that may sound strange is to embrace it; know that people are going to be playing your game for awhile and make sure to keep things lively. Plants vs. Zombies is a great example of this and how the developers were able to get a lot out of their basic gameplay.

Beating a level always granted a reward; pushing the player to keep playing to use it and see what's coming next. Each chapter of the game is ten levels long with a bonus challenge in each chapter to break up the levels.

One thing to watch out for with games built around a slow burn is to make things worse. Elements like a forced tutorial, unskippable cutscenes, anything that slows the pace of the game more for expert or returning players.

Another thing that can help is to have skippable tutorials or sections for returning players, that way someone isn't forced to watch or play elements that they already know. For the last topic I want to touch on is a special example of how Valve has become a master at pacing with their singleplayer games.

Valve has become one of the most influential developers in the world for many reasons, but we don't tend to talk about their game design all that often. Back during the very early days of my blog, pre Game-Wisdom; I took a close examination of Valve and how they've created amazingly paced games.

Valve effectively "segments" their games and level design into different parts: Story, Combat, Puzzle and so on. Their games are almost like a writer deciding how a movie will play out. This allows them to move the player around these different segments, with the only indicator being when the name of the next level pops up on the screen.

This is one of those things that it's very hard for me to explain in text; maybe someday I'll make a video on Halflife 2 to explore this further. Take a look at the first level of Half Life 2 or the "Welcome to Ravenholm" stage to see how one level is really broken down into different segments to create a complete experience.

While this may be hard to explain, the results are clear as day. The player is constantly kept moving and the segments are long enough to get their point across without becoming overextended.

Pacing is one of those parts of game design that is not going to be solved simply by the game designer. You need to have people play-testing your title to see how it goes, both from an expert and newcomer point of view. Just like with my post on difficulty, there will always be people who find your game too slow or too fast, and you're going to have to draw a line in the sand.Â Understanding where you to speed up or slow down is tricky and you don't want someone getting tired of your game or getting lost in it.

(Check out Game-Wisdom for posts, daily videos and weekly podcasts on game design and the industry, and my Patreon Campaign to secure monthly funding)