Last year I launched my first game on Steam, followed by three months of continued development before the arrival of Steam's biggest sale of the year. I originally planned to enter with a 10% discount, but then things suddenly got more interesting when Steam contacted me to offer a one-day front-page feature, if I would agree to increase the discount to 25%.

I was really on the fence about it since I never intended to discount by much during Early Access, but I guess in the days of the world's largest PC game sales platform getting as crowded as it is, passing up this kind of extra exposure might be a bad idea. (Interestingly Cogmind still turned out to be one of the least-discounted featured games of the sale, which is kinda interesting, but I didn't know this until later.)

Let's see what impact the feature really had, in addition to the effects of a two-week sale in general.

Looking at just the first week of the 15-day sale period, the visitor sessions have spikes that clearly reflect the time Steam updates the games featured on its front page each day. This apparently attracts a large amount of traffic to the site in general.

With Cogmind specifically, however, there are certainly some aspects that favor US traffic, for example being English only. Another related factor could be US customers making up a large portion of Steam customers. I can see this in my November monthly sales data which shows that, compared to direct sales from my site, Steam buyer composition is 40% more American, certainly a larger ratio than I expected. (Direct buys were 42% American, Steam buys were 59% American.)

Expanding the graph to include the entire sale dwarfs pretty much everything except the day Cogmind was featured. That really does bring a lot of exposure. (Duh :P)

There were millions of impressions that day, and for a more mainstream game this would have been a gold mine. Not so much for Cogmind because, well, it's obviously a fairly niche game. But still, any exposure is good and it does meant that more people who do happen to enjoy this niche (or just might like it!) had this opportunity to discover Cogmind that day.

There's an interesting tall spike there at the end of the day, I guess people hanging around the main page right before it switches over to the new featured games, although it's interesting that didn't happen at the beginning, too... I don't have a good explanation for that one. There was no significant coverage for Cogmind at all during the sale, not like what happened during the October launch.

Despite millions of impressions from the feature, there were only about 163,848 actual visits to Cogmind's store page that day.

Taking another step back to put the entire sale in perspective, in the two weeks before it began Cogmind averaged 991 visitors per day, much lower than the sale's 16,655 (or 6,141 if excluding the feature day). So as one would expect, there's a ton of general traffic during a sale (+520%), and far more if featured.

How does this translate to sales? Not nearly that well xD 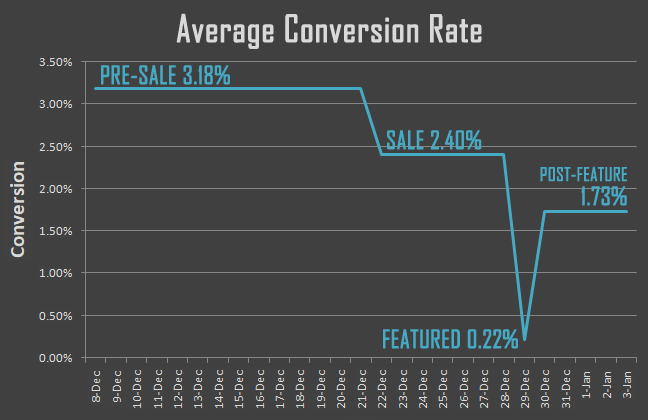 Although as mentioned the feature day accounted for two-thirds of sale period traffic, that day accounted for less than one-fifth of the total sales! One could say that certainly visitors don't necessarily buy immediately and may wait some amount of time, days or more, before buying, but sales momentum unexpectedly declined after being featured rather than the other way around. (You'll see this same trend below in the absolute sales graph.) One would also be tempted to say that the exposure really didn't do a whole lot in the short term, but that's impossible to know for sure since who knows the decline could have otherwise been even faster without it.

Overall, by raw sales numbers Cogmind did much better during its October EA launch than during the Winter Sale, even though the latter had a steeper discount no top of being featured. Niche!

Of course the thing about sales and features is that they're not targeted, and Steam notably does a terrible job of recommending games people might like so I have little confidence in their ability to lead the right players to Cogmind. This is doubly hard because the mainstream definition of the term "roguelike" is such that it's used by games which are nothing like Cogmind, so it's only partially Valve's fault :)

Another way to look at the discount's (and especially the feature's) impact on sales is by analyzing wishlist numbers. This is actually a point Valve used when trying to convince me to increase my discount in order to be featured--that even those who don't buy will at least become aware of the game's existence, wishlist it, and maybe buy further down the line.

There was definitely a respectable spike of wishlisting on that day... 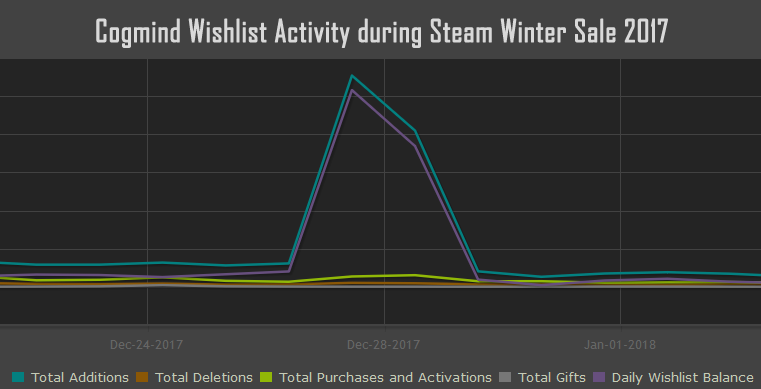 Although a high peak, it can't quite compare to the total volume during EA launch last year. 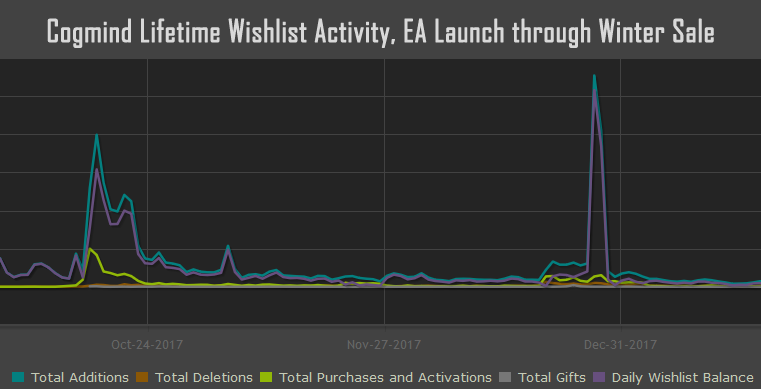 (No y-axis on these because it's data direct from Steamworks.)

Both wishlisting (and sales) are definitely greater during the first week of the sale, and start declining thereafter. It would seem there's a lot of buyer fatigue in the latter half of such a long sale :P

Mainly because I'm curious, I also recorded how Cogmind fared against other games during the sale, in terms of revenue. As I mentioned in a previous postmortem, this information is easy to tell by following Steam's Top Seller lists by genre, because they directly reflect each game's relative revenue and the lists are updated quite frequently.

About once per day (in an anonymous browser via VPN in the US) I checked how many pages it took in a given category to reach Cogmind (each page contained 10 games during this period). 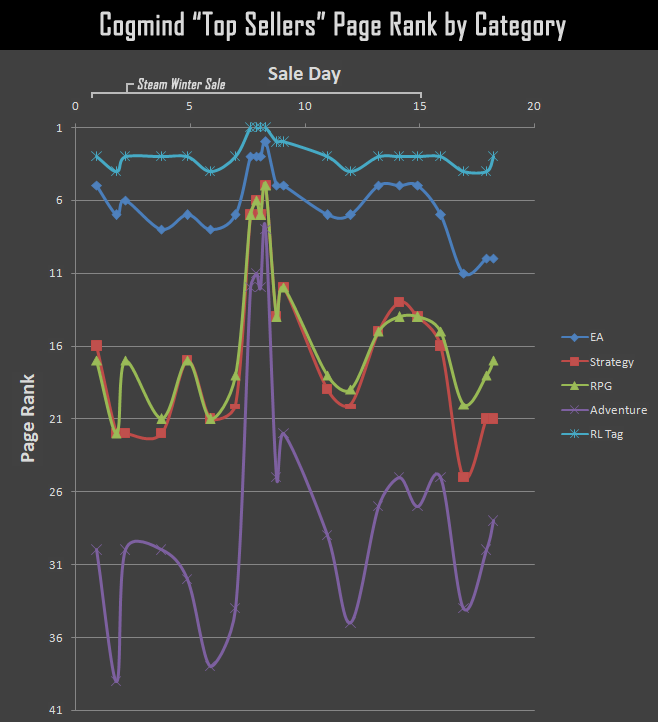 Naturally Cogmind is at a slight disadvantage outside the EA category, since the others include "complete" games, but overall Cogmind did pretty well and--the primary reason I wanted to create such a graph--the effect of the front-page feature is pretty apparent there. It shot Cogmind up to one of the top selling roguelikes, for sure, as well as being pretty high in the much larger EA category.

For comparison, because I'm still wondering what it's all about, I also recorded Cogmind's ranking in the "New and Trending" tab over this period, and found that being featured had literally zero impact! So much for "trending." 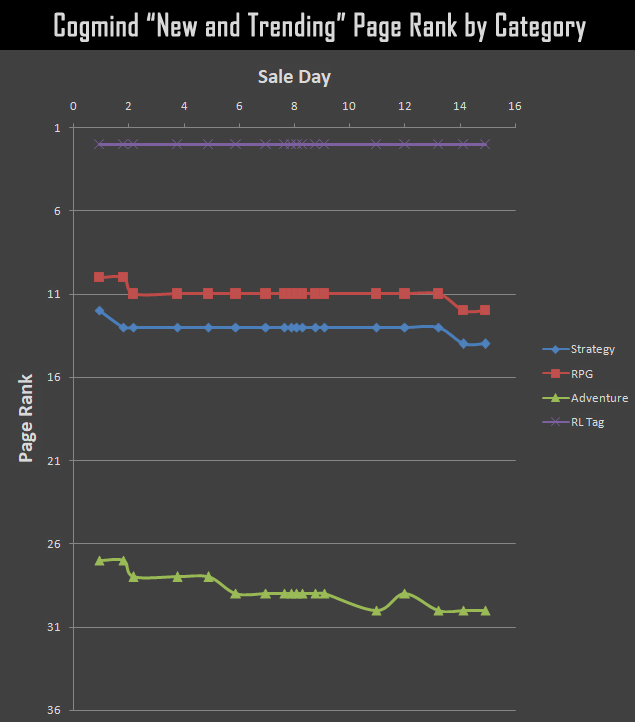 Perhaps Valve excludes factors like traffic from their own promotions on the main page, since maybe that "doesn't really count."

I'd been of the impression that at least releasing new patches and getting attention that way was a method of rising in those ranks, but I've since released a major version that attracted lots of attention without getting anywhere in New and Trending, so I dunno...

Relatively speaking, what did the sale, and being on the front page, mean for Cogmind's bottom line?

I didn't have any expectations myself, but in hindsight the results aren't super amazing like some believed they would be. Hey, it's still better than not being featured (pretty spike!) and definitely better than not having a sale at all.