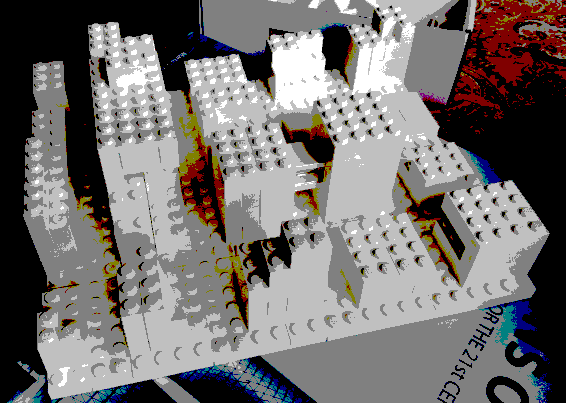 Did you know that I spent over 10 years of my adult life almost exclusively studying cities, urban planning, the geography of cities and urbanism? Well, it's absolutely true. I even have the PhD, papers and teaching experience to prove this and, to cunningly and swiftly change the subject, as I've always been fascinated by those intricate, built manifestations of society and loved working on games, I've decided to bring the two together. My first attempt was that ambitious City RPG that's been --to put it mildly-- put on hold, but now more things are afoot.

I've already started consulting on city matters and exercising my fantasy urban planning skills for an amazing indie project I cannot say much about (yet), am actively looking for more work of the sort and have even slowly began organizing a book about the crafting of cities and settlements for games.

What's more, I thought it might be a nice idea to start writing a few simple articles about games and cities. Or even about the principles of urban planning that can be applied to level design. About storytelling via the built environment. Then again, a series of articles might be too time consuming to be a great idea after all. We'll just have to see how that goes I suppose, as I'm in no position to make any promises. For now, let me attempt a first take at an article of the sort.

Mind you, I did consider making this a piece about the basic elements and functions of the city --on what makes a city a city-- but chances are such an attempt might end up being a bit too dry (until I properly refine it, that is). That's why I decided to do the exact Â opposite. Focus Â on impossible Â urban environments instead. Go for something truly weird; hence The Motionless City.

You see, even a city that has given citizen rights to its frogs, is run by incredibly tall and slender blue humanoids and has been built on a cobalt island surrounded by a lake of brown acid can be made to make perfect sense. It will be different, yes, probably incredibly interesting too and a very challenging setting to design, but it can easily make sense within its own set of rules. Unlike a city that violates a key, fundamental characteristic of every urban agglomeration since the dawn of history: the need to move things and people around. The need for transportation.

Taking away something so crucial, something that cities have always by definition facilitated makes for something truly odd. An agglomeration that feels decidedly wrong and, more importantly, one that could serve as a fine start if you are aiming for the creation of an otherworldly experience for your players. Or an extremely unique location in your setting that's a city only in name (and in some respects) and, though it wouldn't be winning any good planning awards, such a place could indeed prove to be worthy of all the exploration a player could afford.

A huge city of the dead or semi-dead could serve as a pretty handy storytelling ground, for example, and it would definitely be motionless. Vast dust-covered pyramids, an impressive lack of roads, huge intricately built up areas, millions of bodies dreaming virtual reality utopias, while a network of tubes and cables keeps everything functioning. Stationery robotic arms fixing damages. No windows, no doors, no lights with the exception of a few tiny screens here and there. Entering any of the buildings --if anyone could call them this-- seems impossible, though those six gates of gargantuan proportions could allow access to the inside of the mass of the city.Â

Or, how about a version of R'lyeh? Maybe a huge super complicated factory creating killer robots or just a necropolis? All these could be considered motionless cities and would be highly amusing to play in and interact with. Also they do serve to showcase the point of such thought experiments, as would the idea of a frozen city waiting for the player's actions to set it back --possibly partially-- in motion.

But, all those are not really cities, are they? How could a motionless city even function? And would the lack of motion only apply to its residents or is everything stationery? Has the city always been motionless or is it some sort of huge graveyard? What if a city only seems motionless and all the traffic occurs on a hidden level? What if all movement consists of tiny droids ferrying things around? Obviously every different answer would provide with a different set of urban possibilities and thus a new creative puzzle to solve.

From beings of pure energy and dying magical alien races that simply cannot move anymore to exotic super-smart fish each living in its own bowl to a sentient, robotic mega-city, such places, such motionless cities, would offer amazing opportunities for storytellers, artists and game designers. Also, I do hope to have already provided you with a nice little trick to help you conjure up weird places.

As for the idea of The Motionless City itslef, well, it is something one can spend hours working on, planning and designing everything from the tiniest detail to imagining a wonderfully different skyline and I might just end up doing this. Some day.