Why do we love stories?

We get excited by them, even eagerly await their arrival for months on end (thank you, Strange Things). Stories are creative, imaginative, and we know that it takes intelligence to make a good one, because there are so many bad ones. I think the most important thing stories do is they force us to make a human connection with the characters - "I love her, I hope she finds her happiness" or "I hate that guy, he better get what's coming to him." These reactions create an interest in seeing things through, and I believe that fundamentally this is the real allure of stories - the mystery of what will happen as we watch these characters' lives play out. Will they succeed or fail? What obstacles will they face? As the writer, it is your job to create this allure with characters people want to spend time with going through interesting experiences.

I am obsessed with stories - I need them. I can hardly play a game if it doesn't have a story element, and I would never think of making one that did not. I should probably introduce myself - my name is Leonid Pilchin, Creative Director at Far-off Daydream Games. I am an artist, writer, and animator. I worked in animation for many years on shows like Ugly Americans and Jimmy Two-Shoes, before deciding to branch out into making my own independent projects: 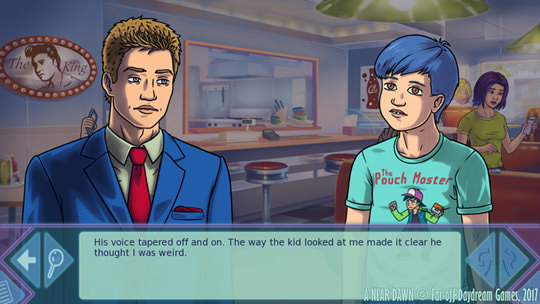 If you are a writer, the chances are someone asked you before where you get your ideas. Somebody recently asked me what inspired me to write A Near Dawn, the story I am currently working on. I knew the answer straight away, but it was not going to be a short one. There are so many things, and I keep getting inspired as I continue to work, so the list will only keep growing. Inspiration is key to keeping your work fresh and original, it sparks new thinking and gets you moving in a different direction. I've thankfully never had writer's block, but I know the solution isn't to keep focusing on the problem, it's to look outside, do some research, expose yourself to new material - find that inspiration. And at the end of the day, there is no shame in someone saying about your work that 'it is like [something you love], but different.' I very much hope that my work ends up being like something I love.

Here are some things I love: 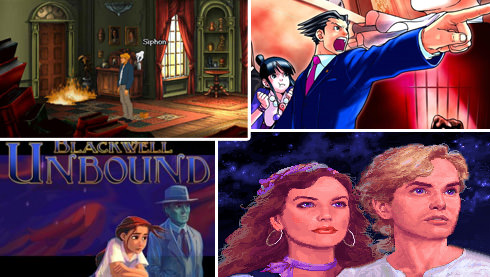 I grew up on adventure games: Monkey Island, Indiana Jones - and later Broken Sword, Blackwell, Ace Attorney. I adore these stories and have an association of pure joy with them, mostly because they are a part of my childhood. These games inspire me, because their writing is clever and their storylines are imaginative. Everyone has a different set of works that set the bar for them, whether films, books, or games - and in my mind, these are the ones that I will always be working towards within my work. I don't need to deconstruct them or reverse-engineer them to know what's great about them, I know it all of that by heart, just as I am sure you do with your selection. These tell their story like any other, but they reinforce it with this charming, quirky humour that is the true genius behind them - their personality. I have a theory about eccentricity, it really sets work apart and in my opinion makes it more memorable. Like Peter Lorre in The Maltese Falcon, I probably wouldn't watch that film again for any other reason. This is the objective of your work, originality. The last thing you want in a story is to experience the same thing you already have a hundred times, because characters are people and people are typical - you don't need another story about typical people.

I always wanted to make an adventure game like these. When I sat down to write one, I wasn’t sure what I was writing at first, but my favourite character is an attorney on holiday named George Stobbart, and I began with one of my own. Except mine wouldn’t be away on vacation, he would be absolutely dedicated to his work, because he had something very important that only he could do. The day my story begins would be the day my character's relatively typical life completely goes off the rails. Someone might say (and someone actually did) that my project reminded them of Broken Sword, except A, B, and C, and that was the biggest compliment.

I think about my influences all the time and I can trace the ideas behind all my original work back to their source. My game about sock puppets stems from seeing someone locked in a room on TV and remembering Dick Solomon on 3rd Rock From the Sun playing with his sock when he was trapped. Another story about an international assassin conspiracy centering around Hong Kong - no surprises, was inspired by some Hong Kong films I was into at the time. And I wonder where the inspiration came from in the original stories that inspired me, and if you could keep tracing it back whether you would end up at the dawn of time.

In addition to those positive and generally upbeat child-friendly adventure games I mentioned, I have also always been fascinated with exploring the depth of humanity, the light and dark within characters, and with pushing them to their limits. I never liked characters that are always strong, strength is easy and boring. I want my characters to be brave, but to struggle, to be afraird, I want them to try and fail - to be human - and earn what they desire. I appreciate how David Lynch can make the typical very interesting by focusing in on it and refusing to look away when most probably would. He is a man who enjoys exposing the charm in a character’s personality, but that is only one of his interests. He also takes pleasure in bending your mind and subjecting his characters to unbelievable realities. Both are things I try to accomplish with my current project, as well. Though I discovered Twin Peaks about three-quarters of the way through developing my story, it inspired me to push even further how much my character's psychological difficulties affect him.

Another possibly surprising influence for my project, certainly one I haven't mentioned much in the past, is an old Japanese horror game for the Super Nintendo, called Clock Tower. It is very good and very creepy, I could not recommend it to everyone. What intrigues me about it, other than the strong female protagonist and their ability to create a very dark and eerie atmosphere with limited graphics, is that your ‘health bar’ is the degree to which you are afraid, and the more exposed you are to the darker elements of the story, the less you are able to defend yourself against them. I initially decided to integrate this idea of a ‘sanity meter’ as well, and as my character would give in to his darker urges he would edge closer to ending up institutionalized.

But your project is your own and it will continue to grow and evolve the more time you spend thinking about it. As I developed my character's darker personality, I saw it more as another side to the story. At some point, it no longer felt right to punish the player with this 'health' system for taking a darker turn and wanting to explore it, when in fact it had become fundamental of the story. So I was initially inspired by the mechanic, I implemented it, and then I scrapped it. You wouldn't know Clock Tower influenced me at all if I hadn't told you, yet traces of it will remain, because it's been part of the evolutionary process of the project. At the end of the day we will always be experimenting and exploring as we create our work and search for originality, but we can't help to be influenced by those sparks of inspiration that drive us. The most important thing in our quest is to listen to your project and give it what it needs and what works well for it (and take away what doesn't). You will know what it is, because you have that bar in your mind set by those works you love just as I do.

Thanks for reading. You can reach me in the comments and on Twitter! Also, please consider checking out A Near Dawn on Kickstarter.