Recently we were asked by Gamenation to participate in the launch of an experimental Ethereum-based game distribution platform.  Although our game, Book of Demons, is still in Early access on Steam, we decided to give it a go. The project launches today, and here are our thoughts about the whole thing.

If you’re not familiar with Book of Demons, please take a look at our Early Access launch postmortem, where I discuss the problems with marketing and distribution of Indie games.

If you’re not familiar with Ethereum - an open-source blockchain-based distributed computing platform featuring smart contract functionality - it probably would be good to get familiar with the general idea first. Here’s a nice introductory read, or you can go straight to Wikipedia.

What does it mean and why did we do it?

When Gamenation approached us and said they were looking for a launch title for their upcoming Ethereum based game distribution platform, we were a little skeptical and hesitant at first. We don’t have any experience with cryptocurrencies, and normally we stay away from experimental distributors who are just starting and are yet to build an established audience. Our game is still in Early Access on Steam, and for the time being, we’re focusing our efforts on ongoing development and community support. Keeping those positive reviews coming takes a lot of effort. 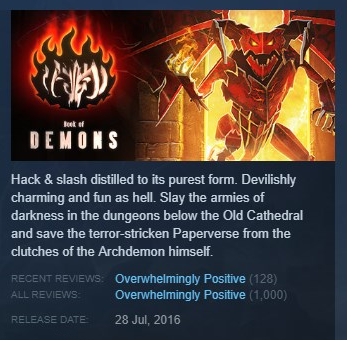 But when we looked at the details of what Gamenation was proposing, we become quite intrigued. First of all, it’s not really a brand new distribution platform (so not a competitor to Steam or GOG) but a clever distribution scheme that builds on the strengths of ether cryptocurrency transactions. When you buy Book of Demons using Ether, you will still be getting a normal Steam key for the game. At this point you might ask - so what’s the big deal? After all, you can already pay for games with bitcoins on Steam, so what’s the difference? It’s all about making use of the smart contract technology (unique to Ethereum) and including more people in the payment equation. Most importantly, the influencers.

Getting influencers on board

If you ask anybody in the gamedev industry, especially Indie developers, about problems, they will most likely start talking about game discovery. There are simply so many games released these days that getting through the noise and reaching your audience has become a real pain, even if you have a good game. Traditionally, this was the role of the video game press, but many argue that’s no longer the case. Gaming press has hardly the capacity to cover all the AAA release, and the integrity of the reviews has been questioned for a long time. In the meantime, independent YouTube and Twitch streamers have become the premier destination for game discovery for many gamers. From countless small focused streamers to a few dozens of big international superstars, they’re serving content for any kind of gaming need. Using their charm, ingenuity, integrity, they managed to amass enormous audiences and earn trust of their followers. According to most developers, getting the influencers to cover your game (and do it repeatedly) is the key to being noticed.

But how selling a game using Ethereum ties into this? When making a sale using an Ethereum smart contract, it’s trivially easy to have the income split between multiple parties – be it developers (companies or individuals), publishers, marketers and yes, also influencers. Since influencers are doing such an important job, it’s only fair that they should get a cut of the profits. This way, influencers will hopefully have a better incentive to promote games which offer such options, and this is what we are hoping for by taking part in this project.

If you’re an influencer who’d like to take advantage of this option, please contact Gamenation for the details. Please note that this is a pilot program, and for the time being it will be available to a limited number of streamers.

If you wish to learn more about the platform, please read the announcement by Gamenation here.

This is an experiment

As far as we know, Book of Demons is the first game to be distributed in such a way. We’re not sure what the results of this project will be, but we’re proud to be part of it and we’re happy to support Gamenation in their efforts to build a game distribution platform for the future.

Sales made on Ethereum have many advantages (security, instant payments, transparency to all parties) but there are also a few disadvantages (such as low cryptocurrency adoption, difficulties in bookkeeping, exchange rate fluctuations). Hopefully, it will turn ok and the action will get noticed, as the idea is great and one day might solve the many problems Indie developers are facing with the distribution and marketing of their games.

So, if you happen to own some ether and have an urge to hack & slash some paper demons (or if you just want to see how the platform looks) visit bookofdemons.gamenation.co.

Stay tuned for the results

Gamenation promised to secure some high profile YouTubers for the launch and I’ll be posting the links to the coverage in the comments below in the coming days. We also plan to later share more about the resulting sales. We’re not expecting to move volumes of the game this way, mostly because of the high entry barrier in cryptocurrencies, but we hope it’ll be enough to get the whole project going. In the worst case, we’ll get some additional coverage for the game. So keep your fingers crossed, and stay tuned for more news about the results.