From keyboard and mouse to on-screen analog thumb sticks


You may have read before about some of theÂ difficulties of porting Onslaught! to iOS. The first major hurdle we had to jump was getting a decent framerate. This and many other technical issues (including audio) wereÂ solved by Game Closure's SDK, but there were other critical issues to address, including a fundamental difference in user input.

Versions of Onslaught! Arena forÂ ChromeÂ andÂ OSXÂ rely on mouse and keyboard controls. Players can use the WASD keys (or arrow keys) to navigate, as well as the mouse for aiming and attacking. Obviously these input mechanisms are not compatible with touch devices. To make the jump to mobile as smooth as possible, we experimented with many different control schemes, and ended up providing players with two options: 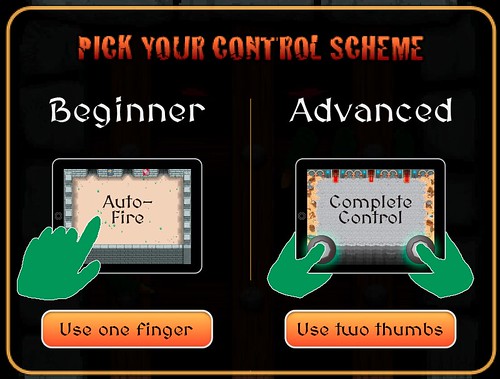 None of the decisions we made regarding user input were decided on lightly. First, we understood that analog thumb sticks have issues of their own, so we read up onÂ best practicesÂ and studied the approach used by other popular games in the shoot 'em up genre (includingÂ MinigoreÂ andÂ Geometry Wars).Â Based on this research, there seemed to be two very different approaches to the positioning of digital thumb sticks: dynamic and static.

Dynamic thumb sticksÂ (like those used in Geometry Wars) appear on the screen only after the player touches the device, creating anchor points. Movement is then recorded as relative to those points. This has advantages such as user comfort; if one player likes to have his or her thumbs near the edge of the screen, that's fine. Likewise this method supports players who would prefer to reach farther into the device for stability or other reasons. One potential downside is that without prior visual indication, it may not be easily understood how to interact with the game or where to touch the device to begin input.

Static thumb sticksÂ are typically always visible and in fixed positions on the screen. We decided to go with this option for a few reasons, including what we believe to be a more robust first-time experience; players new to the game could see at a glance where to put their thumbs. Additionally, it removed issues with monsters or traps being hidden beneath players' thumbs!

We strongly believe in code reuse so we wanted something that could easily be dropped into just about any project. This led to the creation of aÂ Stick classÂ that can be used like so:

This is easily rendered to the canvas element with code like:

I have created and uploaded examples of this Stick class being used on the Lost Decade Games GitHub page. One of them uses this class as aÂ dynamic thumbstickÂ that should work in most browsers. The thumb stick does not appear until input begins and controls the velocity of the green circle on the screen.

There's also aÂ static thumbstickÂ example that uses the same class. This demo also controls the velocity of the green circle but it's been augumented with base and pivot graphics (the same graphics used in Onslaught!) to demonstrate how extensible the Stick class is.

This code is open source and available on ourÂ GitHub demos page. For developers who would also like to see how this is accomplished on an actual iPad, load upÂ this pageÂ directly on your device.

The transition from keyboard and mouse to analog thumb sticks was certainly not a simple process. It involved heavy user testing, player feedback and iterations to feel natural. However, the extra development and research time turned out to be well worth the effort, as the iPad version of our game is now easily the best-selling.