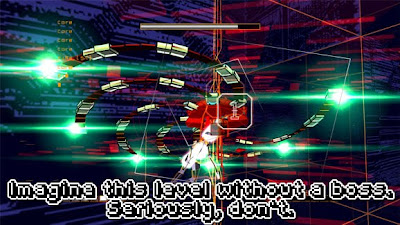 Bosses are entities that have been in shmups since the beginning (okay, early '80s). Almost every scrolling shmup since then has had at least one by the end of the game, at the end of each level, or sporadically throughout the entire game.

If a particular game ended a level without a boss, it would immediately feel as if something were missing, some challenge - a test - to prove one's worth to be able to continue to the next section. And then, sometimes, a boss has issues - it's easy, it's weird, it's unfair, etc. As I've learned in the world of story telling, the ending is the deal breaker. It can make a poor experience tolerable, make an amazing experience mediocre, and in some special cases, turn a waste of time into a reason to live.

The important thing to keep in mind when dissecting what exactly makes a good boss is that there is no universal answer. The boss must be dynamic in both design and execution, tailored specifically to the level in which it resides. Generally speaking, there are five main factors to consider when designing a boss: difficulty, variety, length of battle, pay-off, and character.

Difficulty
If this is the first boss of the game, make sure anybody who's at least trying will beat it without losing all of his or her lives. Losing on the first level - even if there are only a handful - is a buzz kill for even the most seasoned of veterans.

The types of attacks don't necessarily have to mimic the same enemy types seen earlier in the level, but they shouldn't be so vastly different that the boss and level feel separated in function. A level with homing rockets can have a boss with homing lasers. This is a simple evolution of what trials the player has already passed. You can also have the boss use weapons that won't be seen until the next level. The key is transition. If a boss uses attacks completely unrelated to both the theme and enemies found earlier in the level, it will feel unattached (and so will the player).

Variety
The player is going to want an intense battle. Intensity is not found through force, but through dynamism. The more varied attacks from the boss, the better. Many shmups visually separate the boss's health bar to show when the current attack pattern will end and a a new one will begin. However, within each of these sections of the boss's health, multiple different kinds of attacks can be cycled on a loop until the player dwindles enough health.

The weapons themselves can be the same, but the ways in which the player is to both dodge and attack should be different to some degree. If a player needs to find a sweet spot to camp and shoot, then find a different sweet spot for the next pattern, there wasn't a change in strategy. Thusly, the player won't be as engaged upstairs to feel as if he or she is up against something of challenge. Keep them on their toes, even when they know what pattern is coming up next. If they don't have to think during battle, then they won't think much of the boss when it's gone. 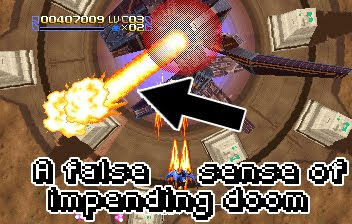 Length of Battle
Relatively speaking, if you know what you're doing to a boss, it's okay to defeat it in half the time it should normally take. On the other hand, if you have no idea what you're doing, it shouldn't take four times longer than expected to defeat it. The sense of accomplishment from grinding a tedious and unfulfilling battle is quickly diminished, no matter how great the pay-off (discussed below).

Globally speaking, the time it should take to defeat a boss should be relatively proportional to how long it takes to get through the level. Radiant Silvergun takes over an hour to complete not only because the bosses have such lengthy battles, but also because the levels themselves are lengthy. The durations of boss battles in Touhou games follow this same formula, as do most R-Types, Gradiuses, and Cave shooters. There are of course exceptions, such as having all or most of the final level be a boss battle, because the player expects to have one grand finale at the game's end. Consider this the one free pass you get.

As far as mid bosses go, they should never take longer to beat than the end boss (obvious yes, but still apparent in some shmups floating around online). This not only lets down the player with more battling after the mid boss, but the end boss is already considered a push over before the battle even begins (given previous playthroughs). Having an easy decoy boss that leads into a surprise harder boss is great, though the effect is only successful the first time around.

Pay-Off
The pay-off isn't necessarily just about the bonus points, collectible gems, bonus life, piece of triforce, or even a granted entry to the next level. The pay-off is what the player has gained by defeating the boss, whether it comes from programming within the game code or an experience that's been developed within the player's soul (too deep?).

This one is probably the hardest to explain, mostly because it's a different experience with every player. There's a rush that can be created through clever pacing of attacks and a false sense of impending doom.

Recent Cave shooters (Mushihimesama, ESPGaluda2) love having bosses that spit out everything they're made of immediately before being killed off. This creates an immediate thrill and sense of danger for the player, but it doesn't last so long as to erase his or her extra live stock within seconds.

Ikaruga's boss in Chapter 3 does the same thing, except instead of filling the screen with bullets, the whole boss spins radically faster and fires its lasers at a higher frequency (all while you're trapped inside).

In this sense, the boss battle intensity itself is a diagram of the level's difficulty leading up to and including the boss. To put it simply, the end of the boss battle should be more intense than the beginning.

Character
This kind of ties in with the thematic connection of attacks between the boss and the level in which it resides. Here, character is meant to describe the purpose for the boss being at the end, the reason why your progress is being halted by this dominating force. Everything is under subconscious scrutinization by the player: the reason that it breaks apart the way it does, the way in which it explodes (loyal readers must know by now how imperative it is to me for there to be a satisfying explosion for everything), the way it reacts to obvious flaws in its armor system, the sounds that are made when it charges up an attack / releases a final blow / gets angry at your skills, etc.

The villain is always the most important character in any story. Obviously, without him, there wouldn't be a hero (or anti-hero), yet there can still exist a villain without someone to combat him. It's in this sense that the villain is the source of there being any conflict (i.e. a hero cannot create a conflict, only solve it).

Great villains in cinema are tied very closely with movies that are successful. Biff from Back to the Future. Jafar from Aladdin. Dr. Evil from Austin Powers. Captain Hook from Peter Pan / Hook. Agent Smith from the Matrix. Darth Vader from ...yeah. I could go on, but these villains aren't just bad guys. They have a story behind why they turned out the way they are. And in turn, they behave in their worlds in response to whatever it is that ticked them off in the first place.

The same goes for videogames, although [unfortunately] they hardly ever seem to be as developed as those found in the movies (and to be honest, there really is no excuse). Sometimes a boss is never seen until the final battle. Sometimes we only know about the boss through cutscenes. Every story has two sides, and it's a bit unfair to the player to only see one side and not have the opportunity to enjoy what's going on behind the curtain.

Some excellent bosses in videogames would be GlaDOS from Portal, Donkey Kong from Donkey Kong, and the Stone Like from Ikaruga (and Radiant Silvergun?). All of these bosses / villains made themselves present throughout the player's gameplay experience, providing both a motivation to move forward as well as a satisfying pay-off at the end. To be fair, the Stone Like never was seen until the end, but everything that it put the player through was a marvelous final exam of everything that the player was supposed to learn throughout the game. 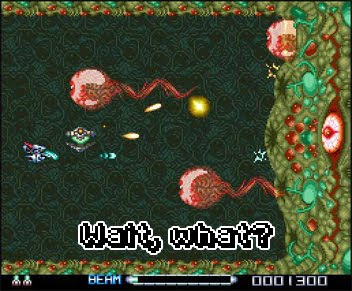 Putting It All Together
So what have we learned here? I, for one, know that I expect a lot when it comes to a good boss battle. However, I don't consider my expectations to be set too high. After all, we're talking about a boss battle here. This is the final challenge standing between the player and what the player set out to do: play the game.

The boss is a summary of what came before. It's a vision of what to expect next. It's the whole of the parts (which in turn shoots parts of the whole back at the player). It's the element by which to judge the entire game, as the boss itself is what the game eventually leads to.

So, the next time you play against a boss and feel remarkably underwhelmed, perhaps this attempt at categorizing the reasons will assist you in understanding why. Or, if you're developing your own boss to terrorize others, hopefully you've learned something along the way that you can implement into your creations (or at the very least, disagree with me hardcore and set out to prove me wrong :D)