In my last article, I described the three act structure in video games by tearing out the linearity of the classic structure and including another dimension to it, reflecting the players’ ability to choose and approach game moments in any way they like.

In this article I’m going to look at each “Act” and how that pizza chart format can be used to chart the individual elements within, allowing greater flexibility to design regardless of your overall structure.

When we look at a Metroidvania title, we see an open world to progress through and at various points in our linear progression we see abilities that allow us to move through the world in a new way, giving us access to more of the map.

A Zelda title is much the same, except that we are given access to most of the world from the start, and what we unlock is the ability to go into specific spaces called “dungeons” that offer a more curated experience.

Holistically, Metroid and Zelda pacing structures are the same, you have an open possibility space that you explore until you are blocked, and then you search for a new ability to unblock yourself. The story in these games uses each dungeon as a narrative note, and the time before and after that dungeon act as the lead up to and the transition between those beats, preparing or expanding on story moments with NPC comments, environmental changes, etc. Each game will use the open space differently, so let’s look at an example: 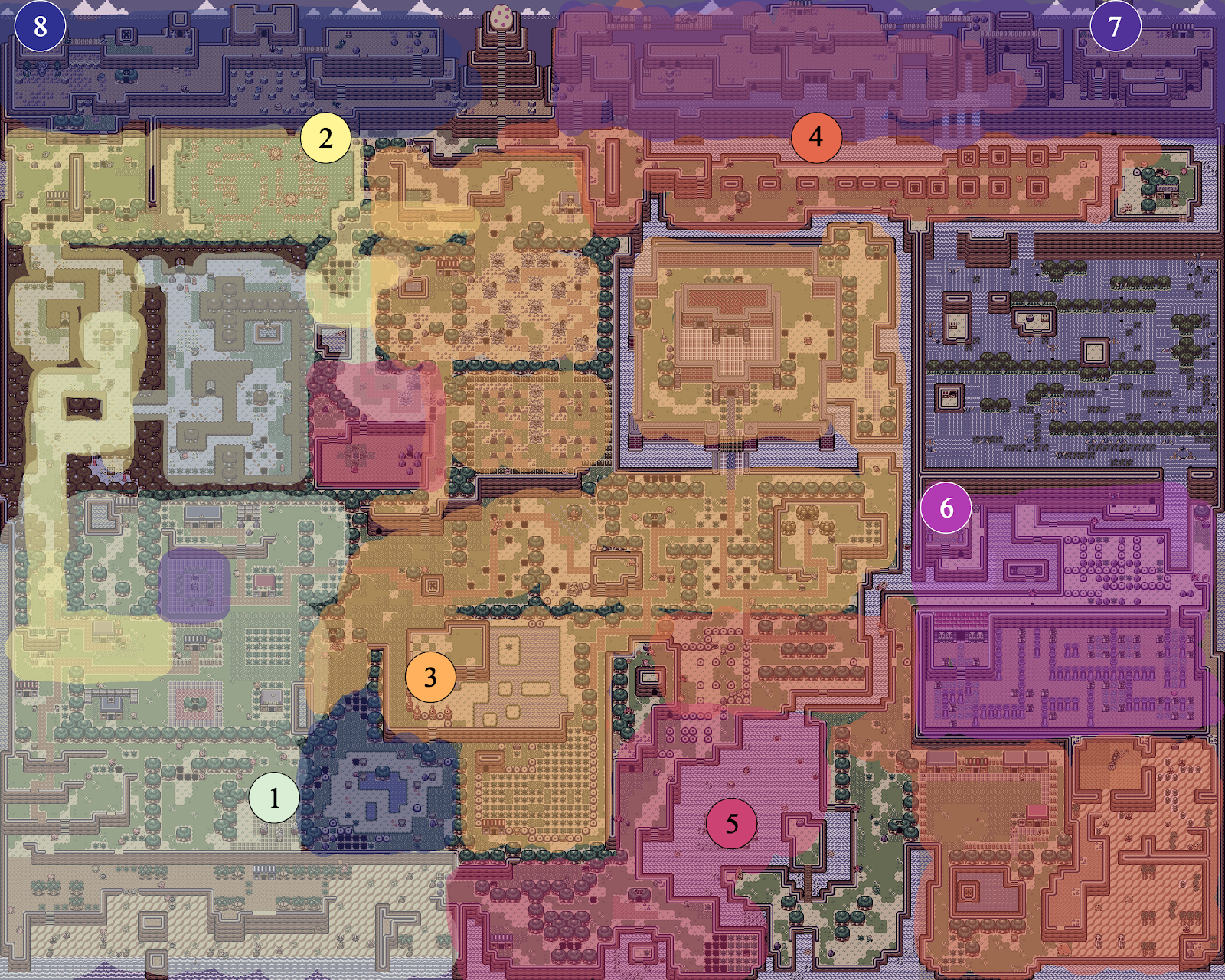 This is Link’s Awakening. Each dungeon is housed in an area that you gain access to by completing subsequent dungeons. As you explore, you unlock more and more of the world, and find more dungeons. What we also see in this chart is a demonstration of pacing, in that the area associated with Dungeon 1 is just the starting village and a small area south of that. Dungeon 2 expands that slightly, but mostly reinforces our knowledge of the same space we learned in the first section. Dungeon 3, however, is a huge expansion, giving us access to roughly half the remaining map. Dungeons 4 and 5 have us exploring that massive open space, and increasing its size even more. Dungeons 6, 7, and 8 all isolate us into much smaller areas of the game, acknowledging that by now we’ve explored and are ready to spend more time in the now-much-longer dungeon areas. What happens in these open world spaces varies from dungeon to dungeon, most of the earlier ones simply let you explore spaces and talk to the people who live there, while later dungeons tend to have you go to a specific place to reveal some hidden treasure that had been under your nose all along.

So to map an example of this onto that pizza chart I mentioned last time, here’s the lead up into the first dungeon: 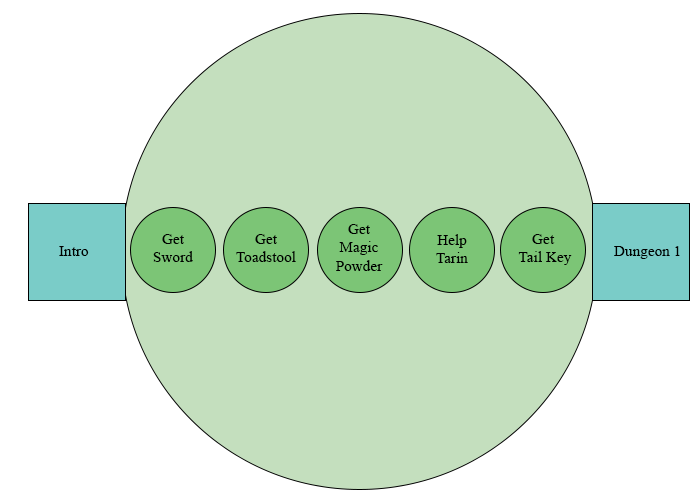 Link’s Awakening is a very linear game as a whole, so there’s not a lot of open exploration in its collectibles (though it does offer quite a number of side objectives you can do in any order, and plenty of time/incentive to explore). However, imagine if you could get the sword at any time in this sequence. Imagine also, if the Toadstool, Magic Powder, and Tarin quests were all unrelated to each other and you could tackle them in any order; or if the Key could be obtained at any time after you had done those prerequisite tasks. This entire area before Dungeon 1 is a miniature open world game, a microcosm of the game as a whole. In this case that microcosm is as linear as the game as a whole, but we see a loosening of the reins in more modern titles. Breath of the Wild was a great crystallization of this concept, even if its dungeons weren’t quite as narratively developed as those in Link’s Awakening.

This structure exists well outside the Zelda formula as well. In Super Metroid, Norfair acts as a specific story moment in its entirety. The world around you has become dangerous and full of fire and that conveys a strong sense of tone. The Ghost Ship acts as a strong, linear experience almost like a Zelda dungeon. Maridia is full of water and walls that must be blasted open, which provides us with a particular feeling as we explore, and is home to the first Metroids we see in this game. While Super Metroid is light on story, you get a solid feeling for each area, because the tone is presented as you play, and the narrative information you need to know is simply present in the world you explore, or forced in front of you in the form of a boss. If you wanted, you could even include more specific ‘dungeon’ sequences in a Metroidvania game, highlighting more specific narrative moments with a space catered to telling that story.

Now that we’ve discussed some examples, let’s break down what defines this structure.

I’d say the core is an “overworld” with a general theme. In my previous article I defined this as an Act, but here I’ve broken that down into just a story beat. Either approach is valid, and you can easily chart both, having a structure laid out for the entire Act One, and then having a sub chart within that to define the story surrounding the first few dungeons that happen during that act. As an example, let’s say you’re making a fantasy game, and everything that happens in the first hour of the game is about the Evil Lord Sorkk’naal, King of All Orcs, planning an invasion of the nearby kingdom. The kingdom you start in, and any spaces you travel through around that kingdom, will all be talking about that invasion, it’s the most important thing happening right now. Even if you leave the kingdom where this is happening, all quests ideally reinforce the theme of the orc invasion, or give us a new perspective on it. If we know the physical space we have access to, we’re able to control where and how the story is told. This could also include something like a hub world. Mario 64 isolates its levels from the overworld, but there are characters throughout the hub world who convey information as you progress, and the castle subtly changes as you come to open new doors and find new spaces. I use the example of Mario 64 here, because even non-narrative games can adapt this structure to keep the world feeling coherent even if a full story isn’t really the point.

After you define the overworld, now define the linear “dungeons” that expand on specific concepts. These “dungeons” could be literal areas that you explore that are specifically about a particular idea, or they could just be quests that you go on which help to expand this aspect of the story. Control gives us a quest that leads us to a specific area for a specific purpose and as we approach that area we get a reinforcement of the area’s events, be that sentient mold or piles of clocks. You are always given the quest when you’re somewhere else, giving you motivation to explore for a while before you go to the linear sequence. By the time you reach the linear quest moment, you’ve been prepared, and you’re ready for linear curation. Control has a few discrete “dungeons” throughout the game, where you’ll go down a particular hallway and reality will bend and leave you in an isolated space full of puzzles or battles, but most of its story happens in spaces that start off as linear sequences and eventually just become spaces you travel through in metroidvania fashion. The concept of “dungeons” is less about an isolated space away from the regular gameplay, and more about the linear, curated sequence that’s paced very specifically. 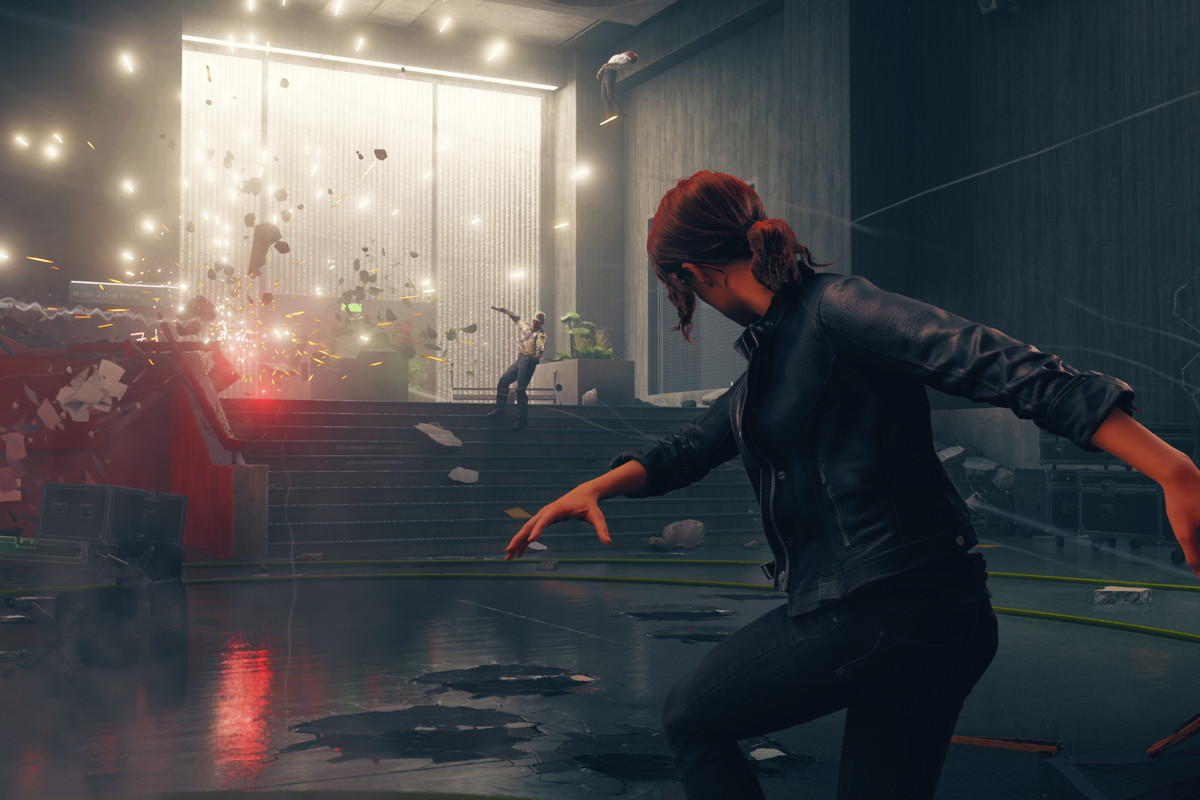 No, really. Control does SUCH an amazing job of this. Go play it if you haven’t.

Ok, you say, that’s all great and everything, but how do I use this structure in a production? Well, I’m glad you asked. Start by breaking your story into chunks. Most people will have an Act One, Act Two, Act Three, and that’s a solid place to start. Have a specific narrative purpose to each of those. Act One: “The orc army is attacking”. Act Two “The army has attacked and now we must fight back”. Act Three: “We’ve won, but at what cost”. Once those over-arching elements are defined, carry them down into the smaller elements within them. Any quest in Act One should be all about the impending attack. Maybe you scout for information, maybe you sabotage them, maybe you convert some of their troops to your side or negotiate for peace. Whatever happens within a story sequence should mirror the overall theme of that sequence. When it’s time to move onto the next Act, discard the quests from Act One. Do this by making it obvious that you can’t go back, once the orc army has attacked, there’s no point in scouting anymore, right? But you can have quests that span multiple acts, Mrs Poppowitz’s pet cat needs to be saved, and it doesn’t matter if the orcs have attacked or not, the poor thing is still just going to be stuck up in that tree. These sorts of quests don’t need to relate to the specific themes of an act, but should certainly expand the story as a whole or serve some functional purpose (fun is a valid purpose, btw). As long as most of what a player experiences in the game pushes the story forward, having a sprinkle of world-building quests available will rarely be a bad thing for your players.

So the key takeaways:

And that’s that! Hopefully this has in some way illuminated a dark corner of your mind. If not, I apologize and will try to do better next time. Until then, thanks for reading!