5 Things We Learned About The Appeal of Competition From Over 239,000 Gamers


At Quantic Foundry, the data we’ve collected from over 239,000 gamers via the Gamer Motivation Profile allows us to explore how gaming motivations do and do not change with gender and age with incredible detail. Back when we had a sample size of around 140,000, we blogged about the Competition and Strategy motivations. With the larger sample size, we have much better precision especially for older gamers, and we’re going to revisit and do a deep dive into the Competition motivation.

1) The Appeal of Competition Declines The Most with Age

Across the 12 motivations in our model, the appeal of Competition declines the most with age. In our framework, Competition is the appeal of competing with other players, whether in duels, matches, or team-vs-team scenarios. 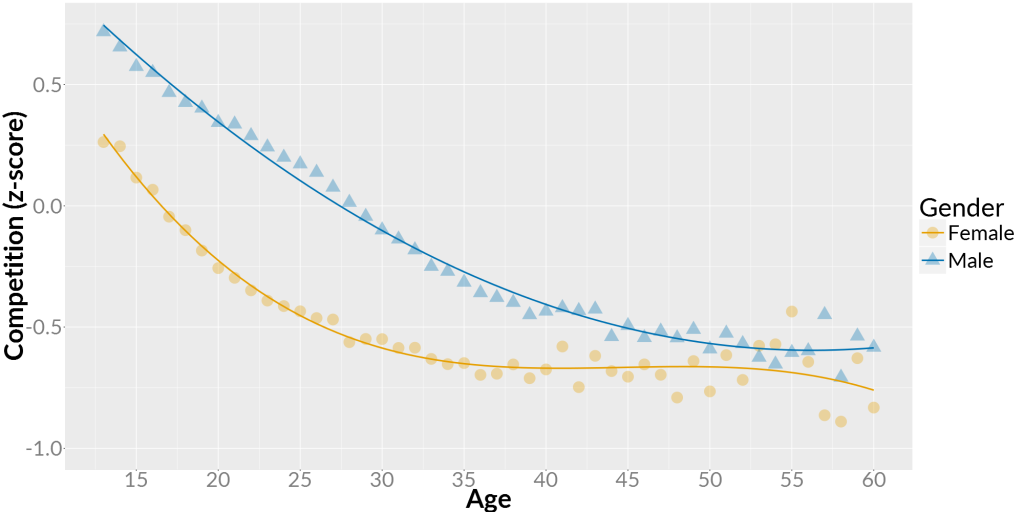 Instead of decreasing gradually or linearly with age, the decline in the appeal of Competition drops the most between ages 13 and 35. After age 35, this decline slows down before hitting a trough. Women hit this trough much earlier than the men, by about 15 years. At age 35, we see the women entering the trough, but the men don’t level out till around age 50. That’s right around when the gender difference in Competition largely disappears.

What the graph shows is that in terms of designing for Competition, there is a surprisingly large and similar gamer cohort of both genders between ages 40 and 60 compared with any other point before age 40.

Let’s now focus on the gap between the two lines, and plot out the difference year by year. While the gender gap may appear stable before age 35, this isn’t actually the case. As the graph below shows, the gender gap doesn’t peak until age 22. 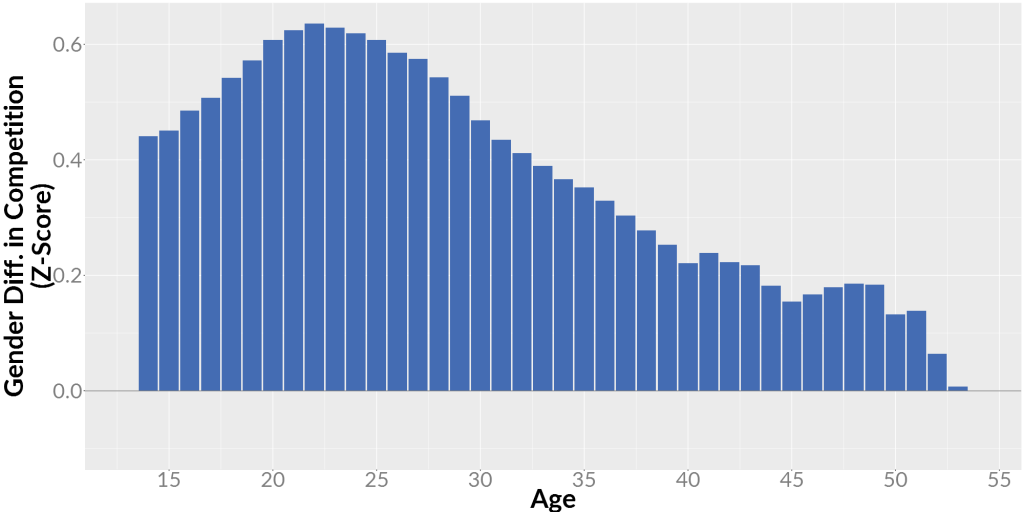 We can look at the gender difference in another way. We can calculate the slopes of the two curves at each age. This lets us visualize how steep the two curves are year by year. In the graph below, we’re graphing the slope of the curves for men and women. A more negative slope means a sharper drop. 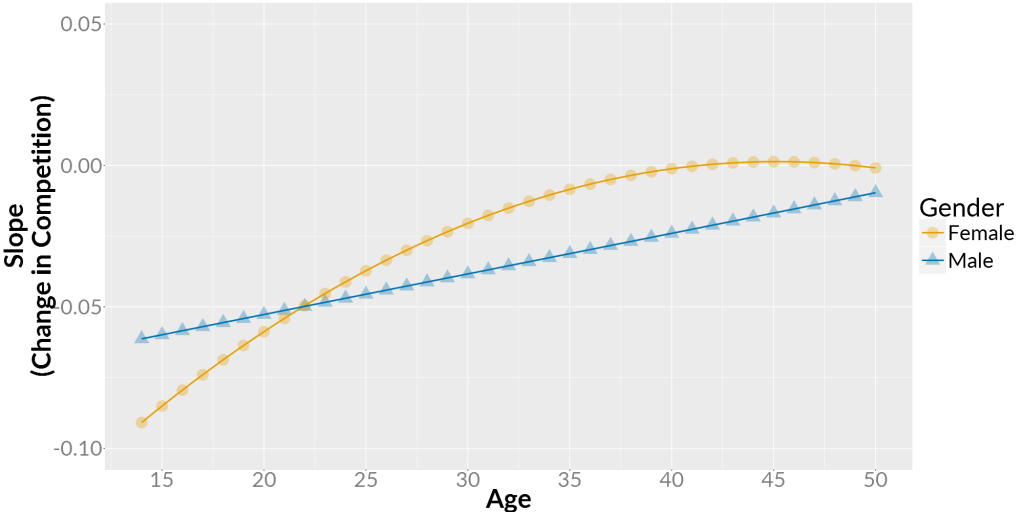 The steepest decline in Competition occurs in women between ages 13-20. This section of the curve sees a sharper drop in Competition than any other point in the rest of the graph.

There are two broad classes of explanations for this. On the one hand, this may just be how dispositions change due to biochemistry as men and women move through adolescence. On the other hand, this may be due to specific aspects of gaming culture. For example, some online gaming communities, especially competitive ones, can be hostile towards female gamers, even (or especially) when they are highly competent players. For young female gamers, these experiences may impact their enjoyment of competitive game genres (or cause more competitive female gamers to leave the gaming community altogether).

5) The Elephant in the Room is Age

In the game industry and gaming community, we spend a lot of time talking about gender differences and what games for women mean. And we tend to think that the appeal of certain gaming motivations, especially Competition, is highly gendered. While this is true, the appeal of Competition is far more strongly driven by age than gender.

We can see this when we compare the largest gap between men and women (at age 22) with the gap between the youngest and oldest men. 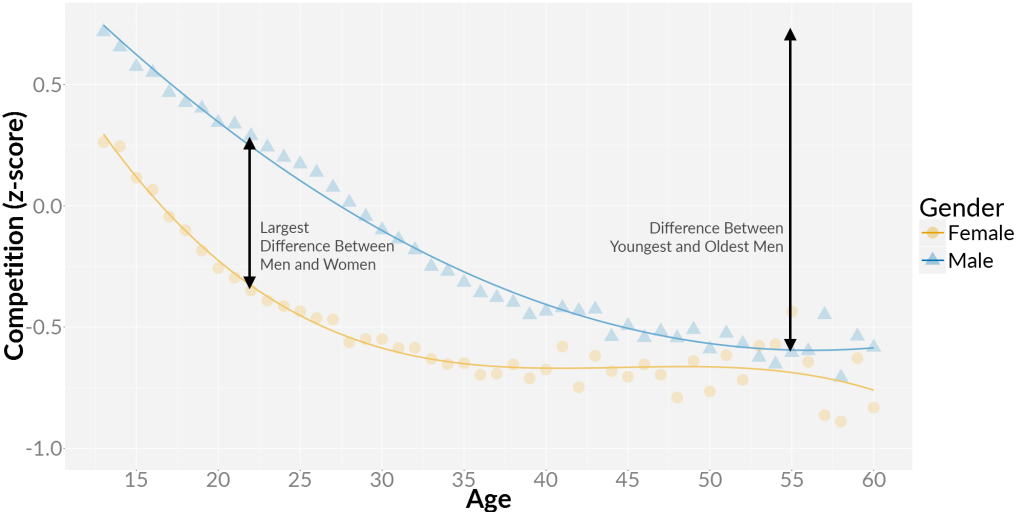 Statistically, we can quantify this difference with a measure of effect size. In this case, age actually explains more than double the variance in Competition than gender. What’s striking about this is that when people talk about how different gamers prefer different kinds of games, you hardly ever hear anyone talking about age.

A Quick Note About Cohort vs. Generational Differences

There’s always a risk of extrapolating longitudinally from cross-section age data. After all, there may be generational cohort effects that are separate from the effects of aging. Across the 12 motivations in our model, more than half have linear trends and almost all have monotonic curves, which is more indicative of stable age trends than the more chaotic generational changes in gaming.

Opportunities Are Hiding in Plain Sight

In the game industry, we often fixate on untested assumptions—whether this is entrenched game genres that might be combining completely orthogonal motivations as well as assumptions of how people play games differently. In both cases, we may have trouble identifying the questions we ought to be asking and finding the opportunities that are hiding in plain sight. Gain rapid insight into motivation trends and game preferences by gender and age in our data-driven 55-page Gamer Motivation Insight Report.