Player 1: ”I just made a nice pass to my left forward.”
Player 2: ”But my midfielder made a perfect slide tackle and took the ball.”
Player 1: ”No, your midfielder was way too late!”

When the information about a tackle is delayed due to network latency, such situations are likely to occur. This will ruin the gameplay, unless several basic safety measures are taken.

So, who is right? Did player 2 succeed with his tackle, or was he too late? If you stop and think for a moment, you will probably come to the conclusion that there is no correct answer to this question. The important question is instead: Who has the authority to decide which player won the ball in that situation?

In this article I will suggest a solution to this problem, and a generic approach to make real-time multiplayer games like soccer ”solid”. Even if the two players are located in different parts of the world, with varying mobile connection qualities, being able to play a real-time multiplayer with a good gaming experience might sound like a utopia, but let’s give it a try.

But first, a few words about the choice of network architecture. 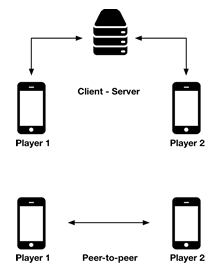 In a client-server architecture, the server is authoritative. The server decides who will start with the ball, who will intercept, if a shot is saved by the goal keeper, and so on. This approach is pretty straight-forward, and not too complex to implement. But the drawback is that the network actions need to go through a server, which means higher network latency. And players that happen to be located closer to the server will probably have an unfair advantage in the game.

Peer-to-peer is superior. Just look at FaceTime or Skype. Large amounts of information are transferred without notable delay over long distances.

With peer-to-peer, it might be tempting to make one of the players authoritative throughout the game. But this is a very dangerous approach, because the player that is authoritative will have a big advantage to make requests really quick because no network request is needed. And the other player will have to send a request ”I want to shoot the ball now” and wait for a response if the shot was allowed.

1. Use deterministic physics.
2. Make predictions in advance.
3. Let the player who has the ball possession be authoritative.

By following these rules, you will have a good foundation for creating a stable game. Network lags will still be disturbing, but the gameplay will be intact and you can do a lot to try to conceal such anomalies.

Some physics engines are non-deterministic. This means that even if both players triggers the shot with the same initial parameters, the ball will probably not follow the exact same path. For player 1 it might hit the bar, for player 2 the shot passes slightly over.

”Even the smallest deviation will accumulate over time, and the result will not be reliable.”

The two players have the exact same conditions but it will result in different outcomes. A common reason for this is that some physics engines make the calculations for a certain amount of time, and high-end devices will therefor be able to calculate more accurately than low-end devices.

Even the smallest deviation will accumulate over time, and the result will not be reliable. In the picture above, the ball hits the bar and bounces back. But when player 2 calculates the same ball path, it hits the bar a few millimeters higher and the ball bounces over the goal. This is why the physics engine needs to be deterministic.

This would be enough to trigger the shot of the ball, but player 2 that receives this action will be dependent on further instructions and will get in trouble if the next action, that says that the shot was intercepted, came too late.

Instead, try to predetermine the outcome, and send exact information about ball’s journey:

”I hit the ball at position p1 with speed v1 and it will be saved by player 2's goalkeeper at time t1 and after the interception the ball will have the new speed v2 and finally end at position p2, and the new ball possession will be assigned player 7 of team 1.”

With all this information, player 2 will be able to prepare the situation and play it accurately without having to wait for any further instructions.

If the interceptor is the goalkeeper, he will get time to prepare a spectacular save.

Rule #3: Let the player who has the ball possession be authoritative.

The two players are connected peer-to-peer. The first thing that will happen is that the players decide who gets to start with the ball, which is decided by a virtual coin toss. A common implementation of this is that both players pick a random number and sends it over to the other, and the one with the highest number wins the coin toss.

Next, the idea is to let the player who has the ball possession to be authoritative. In the introductory example, player 1 has the ball, he makes a pass, he receives information about a tackle request from player 2, and he decides between the two outcomes:

1. The tackle was unsuccessful. Player 1 will keep the possession. He sends information to player 2 that his tackle attempt was unsuccessful and player 2 is responsible to try to make it look like the tackle failed at his end.

2. The tackle was successful. Player 1 analyses the situation and, in fact, controls the opponent’s player to hit the ball in the tackle situation. The information how the ball was hit in the tackle, together with information how the ball will bounce is sent to player 2 and it is predicted which player will be the closest to the ball after this situation. If player 2 is closer to the ball, player 1 will give away the ball possession and thus the authoritative.

Conclusion: The player who has the ball possession will keep it until he decides to give it away. He will continuously receive requests from the opponent because the opponent is never be allowed to directly touch the ball.

How these rules were applied to Solid Soccer

The game that I've been working on is called Solid Soccer and is available on iOS. It’s a fast real-time multiplayer game using Game Center to connect players peer-to-peer. At the writing moment it is in soft launch in a limited number of countries.

To comply with the three rules, we made the following game design choices:

In Solid Soccer, there are only five network actions. These actions are also saved in a history object so it can be used to replay the whole match afterwards.

Although these restrictions will limit the freedom in the gameplay, there is still enough room for interactions, and the game will be very fast and fun, just as in real life. In fact, the illusion is remarkable: The player that intercepts a shot has no idea his interception was predicted at the time the shot was made.

I hope this article encourages you to take the step, you do not have to settle for asynchronous or turn-based solutions, go for real-time multiplayer!