The first version of Golden Wall had a rotational symmetry and had only one path between the two halves of the map and additional paths could be opened by mining minerals. 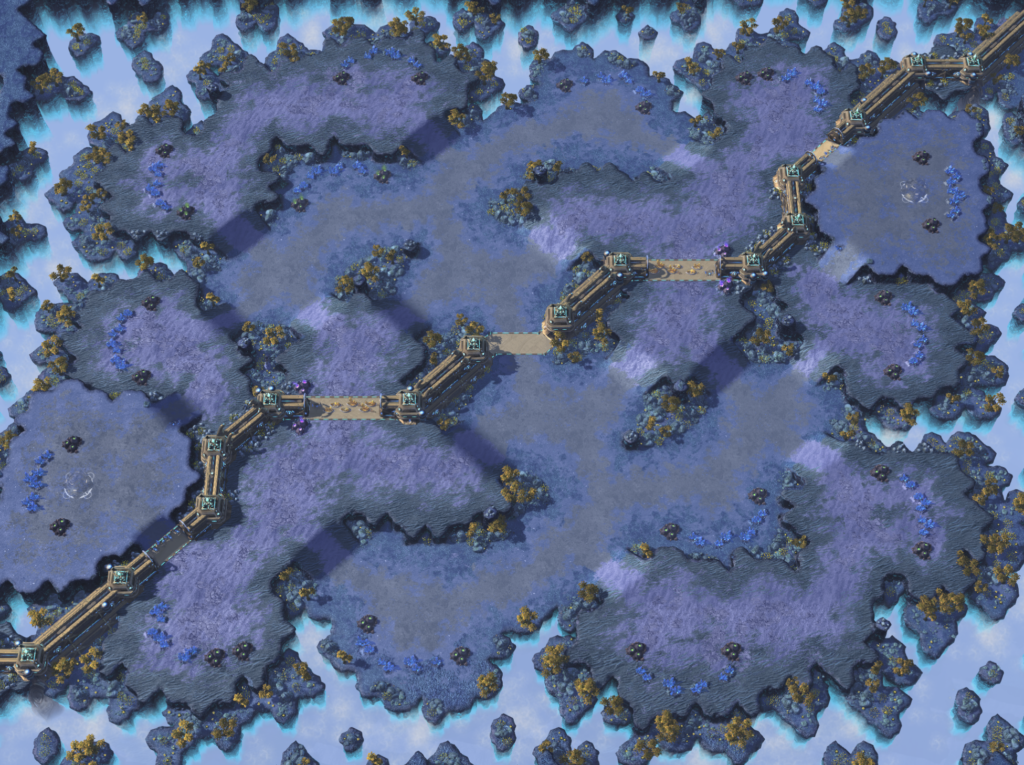 An old version of Golden Wall.

The Teamliquid Map Contest 12 judges didn’t like that the single path could be heavily abused and suggested that I turn the map into a mirror symmetry map. For some reason i only had in mind a diagonal mirror symmetry in mind at that time and I didn’t manage to fit the layout properly while keeping the golden wall landmark. When the next Teamliquid Map Contest started 6 months later, I realized that vertical symmetry was the way to go and I made the appropriate edits.

With this new layout, I was able to turn the map into an experimental map while letting players play in a totally standard way if they wish to. This is something I never thought about before and I took this opportunity to try it out.

The current version of Golden Wall. The entire bottom part is initially inaccessible for ground units.

Players can find a backdoor in their starting base that is blocked by reduced mineral fields. Backdoors in starting bases blocked by destructible rocks are a notoriously hated map feature. The attacker can easily take them down even early in the game and deal deadly damage to the opponent.

In theory, reduced mineral fields fix that issue because the attacker has to bring many workers that may not be able to make a hole when the defender placed ranged units behind the mineral wall. And in practice, it worked! The defender has complete control whether the path is open or not. I didn't hear a single complain about this map feature. This is definitely a map feature I'll use again because it opens up many possibilities for map layouts.

The starting base of a player, the backdoor blocked with minerals and the expansion behind it.

There are reduced mineral fields in the middle. Controlling this area is important when the gold bases aren’t yet open. Only two workers are needed to open a path there so the cost is quite low. Players often made the effort to open that path by sending a few workers so this is a success.

The middle part of the map with a path blocked with reduced mineral fields.

The bottom half is initially completely inaccessible to ground units. This is a mixed bag because at the same time it allows interesting expansion layouts with different playstyles but also some really annoying strategies with Nydus/Swarm Host or Marine/Tank elevator pushes. If the defender doesn’t preemptively open the reduced mineral fields, these strategies can be a pain to deal with. I initially expected the elevator pushes to be weaker as they require highground vision.

I wanted to experiment with ground areas inaccessible with ground units for some time, especially lowground cliffs near expansions. What I've seen on Golden Wall makes me more cautious when experimenting with similar island features in the future.

An overview of the entire bottom part of the map.

The gold bases near the natural bases are very vulnerable to attacks. The proximity of these bases to the natural make them very strong for the extra boost to the economy. I was able to make it balance it out because of how it can be attacked from behind. It is also the shortest path to the bottom half without opening a hole in the starting base.

How the map played out

Because of these map features, the games were very diverse. To the point where each player has its own stylistic approach to the map. Most maps are figured out in a few weeks with their timings, attack/drop routes, proxy locations and so on. On Golden Wall however, the meta was evolving every month with strategies that looked overpowered but each one of them found their counter.

These are the final Golden Wall matchup balance stats.

The map ended up very well balanced for the amount of unusual features it has. With this kind of maps, it's often a shot in the dark with the balance even with educated guesses about how it would play out in theory.

In the end, Golden Wall is my favourite map I've made to this day. It has the highest diversity of opening and strategies I've seen in a map and it was a treat to watch them. Some players play completely standard with the top part, some use only the bottom part and others have a mixed use of the two halves. What i love the most about this left versus right map is that some games end up with a top versus bottom layout. Some games even had their players swap their starting bases! Crazy.

My biggest take away from this map is to let players play in a standard way in a map that strongly deviates from the norm. i create RTS maps for more than 10 years and I never considered this way of creating RTS maps. This map definitely changed the way I am creating experimental maps.

You can watch below a match between two professional Starcraft 2 players who greatly use this map's feature to their advantage.

I am definetly going to reuse some of the features and lessons of Golden Wall in future maps so stay tuned!

You can see more of my work in my portfolio. If you wish to have updates about what I am doing in level design, you can follow me on Twitter.