[Spoiler Alert: This article discusses aspects of Train that you may want to experience on your own.]

As I write this and think about Train, I am a passenger on a train. As a modern-day commuter, I have nothing in common with those train passengers of the Holocaust but I can imagine their anguish and fear. I can feel an overwhelming sadness, so much that it makes me sick in the stomach. I share no cultural background with these people, and yet, I felt an immense empathetic response when Brenda Brathwaite explained the design decisions behind her Holocaust game, Train.

I was at the 2009 Game Education Summit, where I had co-presented with Dr. Ricardo Rademacher on the topic of Creativity, Constraints, and Compromises. The program had mentioned that Brathwaite's board games were on display in a nearby room. Curious, I went to see them on the last day of the conference.

I had just picked up the typewritten rules for Train when Brathwaite walked in with some conference attendees and proceeded to talk about Train. Here, in this intimate setting, we were given a detailed look at the game by the game designer herself.

Brathwaite explained that every detail behind Train had symbolic meaning, from the number of cards to the actions. She demonstrated to us how the pawns were purposely too large for the boxcar openings so that the player would have to really jam them in there. As more and more pawns were placed in the boxcar, they were no longer standing but crammed in every which way. Then, at the end of the game, the players needed to shake the boxcars t 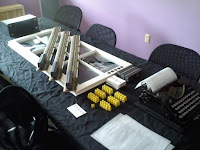 o get the pawns out. It was this level of detail that made me admire Brathwaite as an artist.

At the beginning of the game, players may not have felt that these little yellow pawns represented real people. But when Brathwaite turns over the destination card and it says, “Auschwitz,” the realization sinks in. Some players, noted Brathwaite, do figure it out early and actively try to sabotage the trains, including their own.

My line of questioning begins: What if the destination card was for a lesser-known concentration camp? Do players, blissfully unaware, continue playing? After all, Train, taken out of context, might be a fun game. What if the players were from another culture? What if the event was something not as well-known or explosive? Or something outside of the culture? The Trail of Tears, maybe? The Cultural Revolution? I mentioned Shakespeare’s play, Henry V, and how audiences sometimes don’t feel the tragedy in the recitation of the names of the dead.

If we say that the game developer contributes 50% and the game player contributes 50% to the interactive experience, is it a lesser experience when the numbers don't add up? What if the player has nothing to contribute, meaning 0%? At what point is the authorial intent or meaning of a game lost?

For certain, if Brathwaite had not mentioned it, I would not have caught that the typewriter was a Nazi-era machine. At times, I felt that there ought to be a plaque on the wall explaining all of these nuances. This further cemented the notion in my mind that Train was really more of an art game.

Furthermore, even though the game could be played repeatedly, most people did not want to once they learned that they were sending their train passengers to concentration camps. Rather, Train is an interactive experience you undergo and the epiphany is part of the process.

There was a woman who did reset the board to play another round, Brathwaite recalled. The other players were aghast. The woman exclaimed, “What? It’s just a train station.” Whether the woman understood the game’s meaning or misunderstood it, we’ll never know.

I’m also not sure how children would react to this game. That’s why I think of it as a game for grown-ups. I know that as a youngster in elementary school, I knew nothing of the Holocaust. I had a playmate whose mother was German and one day, another playmate whispered to me, "You know what the Germans did, right? They made lampshades out of the Jews." I thought this statement was baffling. It really wasn’t until I read The Diary of Anne Frank and Elie Wiesel’s Night that I began to understand about the Holocaust.

But my questions were answered in a way. As Brathwaite packed away Train, two people were trying out Sioch 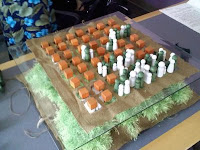 an Leat (aka The Irish Game). When Brathwaite had spoken about this game, I could tell that she felt very strongly about it. All I knew about Siochan Leat was that it depicted an event in Irish history when the British invaded Ireland.

I could see this very clearly as the game progressed because the British pieces were slowly displacing the Irish pawns. But since I knew next to nothing about Irish history, I found that I didn’t feel anything like I had with Train. Moreover, I thought that Siochan Leat might be a fun strategy game to play over and over. I didn’t know the historical context behind Siochan Leat and therefore, I only saw the game.