How to Build a Better Gaming Experience by Adding Value to User Perspective?


The gaming market has been witnessing much volatility since its inception with Bertie the Brain in the ’50s to LAN Parties to smartphone games. A significant factor that has propelled these shifts is the gaming experience and the interactions from the user perspective at large. So, this article explores subjects like how do we design a great UX and a retrospective note on the subject will help the community in better understanding the user perspective.

The Design of Gaming Experience, i.e. Gameplay in a Nutshell

“The experience of gameplay is one of interacting with a game design in the performance of cognitive tasks, with a variety of emotions arising from or associated with different elements of motivation, task performance and completion.” - (Research Paper: Dissecting Play)

The core factors that affect the gratification, emotional connection, intrinsic association, and the motivation for playing the game. The user shall be able to interact with the game under a set of specific conditions to which the software reacts adequately. This ability in modern games is dependent on the physics engine and PPUs (Physics Processing Units.) The game rules are aligned with simulation rules, and the metarules decide the player’s behaviour in general.

Market Insights: $138.7 Billion was generated in revenue from the gaming business last year with the smartphone segment fetching 36% share (Forbes.)

Interpolating between cognitive, emotional, associative, and interactive aspects of playing a game in a strategic manner is instrumental in designing a great gaming experience. Let us have a look at various classic games and understand how they add value to the user perspective for the concerned genre:

Hard to be a God and Prisoner of War (Role-Playing Game):

This is by far one of the most realistic Sci-Fi plot narrating the extraterrestrial communication between civilizations on two similar planets. The highly developed one sends a covert protagonist who investigates the reasons behind the stagnated growth in the lesser developed civilization. The use of dialogues, weapons, and even clothing the course of events. Prisoner of War is a game where the gameplay revolves around the protagonist who is an American flight jockey who ends up in a Nazi prison camp and is trying to make an escape.

Both of them have incredibly well-developed plots which engage the players in through time-bounded gameplay with open-ended missions. The mechanical and interactive playability are tailored to suit an emotional response from the gamer’s end apart from the chronological order of plot twists. These factors contribute to a high user engagement level as they build emotional and cognitive responses to the plot. These are extremely important in RPGs that focus on the association.

FPS games focus on the player’s perspective as the first player in close combat and fast-paced strategic game mechanics. It is considered one of the trailblazers in the segment where the user plays the role of SAS team deployed in European on one at a time basis. The missions require to use war tactics, play as per contextual outcomes like using stealth, position in a war zone, ammunition supplies, player health, and real-time combat situations.

The games from these genres rely primarily on the graphics interface, physics engines, and controller gadgets. As a game developer, you might find it more rewarding to develop FPS games either with levels, missions, and tactic-oriented game mechanics.

Red Alert, based on a cold war plot, has proved to be one of the best gaming experiences where anything could happen! The players find every fad in this surreal game where they have Tesla coils to weather the storm as arsenal along with animals being used as tools of combat. It left long term impressions on the players.

Recent Additions to the Gaming Arena:

One of the most recent genres is MMORPG (Massively Multiplayer Online Role-Playing Game) with the Battle Royale games reigning the market. A large number of users in the same battle in fixed perimeters.

The gamer needs to have agile responses, and there is minimal involvement of a backdrop. High-end graphics, on-demand availability of battlegrounds, minimalistic character interactions, and regenerative nature of gaming constraints are the fundamental requirements for devising an engaging game of this genre.

As mentioned in the above examples, all of the successful games have a lot of USPs which go hands in hands with each other. So, here is the hitchhiking checklist for designing an addictive gaming experience for your next big thing.

Use the UI in support of plot:

The UI shall not create a conflict in the game’s plot and mechanics. This can be understood by the example of an FPS game. If the enemy team is wearing the same outfit as the player and their team, it will create a conflict of association which lowers the quality of interaction. Also, if the background is kept green in colour along with camouflage clothing, this too makes aiming difficult and undermines the gratification as everything becomes too hard to be logically justified by players.

This situation can be surpassed by smart use of colours, contrast, pixilation, and clearly defining the scenes as per cinematographic standards such as Rule of Thirds, Golden Spiral, Leading Lines, and Centre Dominant Eye so that a clear boundary of every object with reference to their surroundings is visible. There shall be an excellent balance of objects and background filling the frame since each frame has a contextual perspective to the game that should not be violated: shading, ambience, visual effects, and colour schemes. The ability to stream visuals and audio live is also an essential requirement for every user.

There shall include a definite task matrix which includes the individual and collective rules. For instance, the GTA series provides briefings for different types of mission that are aligned to the entire campaign. The rules shall not be very complicated or difficult as compared to the skills required to manage them.

The number of inputs from the game and corresponding actions to be taken shall not be exceeding beyond a specific limit. Failing to do so, will confuse the player and they will quit out of frustration. A fine balance between difficulty and the skills required to complete the mission/task is extremely important, and this has been described in the Csíkszentmihályi Mihály’s The Psychology of Optimal Experience as in the below figure. 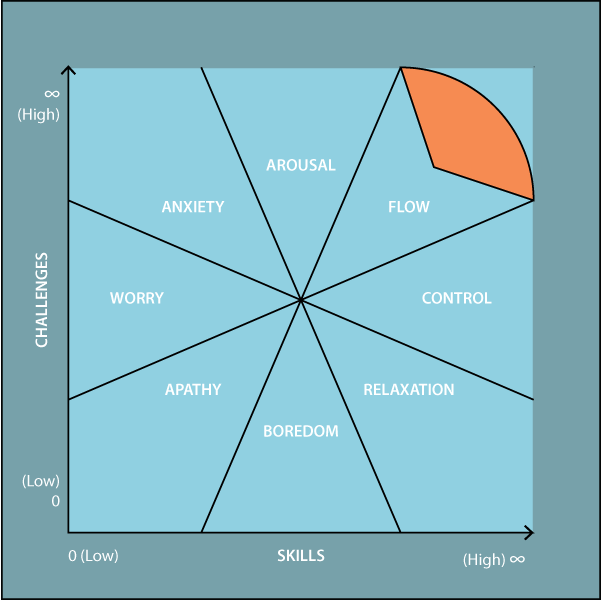 The vital information shall be accessible, the centre of attention should be manageable, the access to upgrade the player’s capacity for limited time/area shall be available, and providing with cascading goals that are aligned with the competencies are some of the most appealing aspects for satisfactory experiences.

Providing Incentives for Achievement of Objectives

Winning small victories is considered to be one of the most effective self-help tips throughout history, and it has a neurological explanation. When an individual wins over a particular challenge, their brains secrete hormones such as endorphins, serotonin, and dopamine which helps them feel better. This fact shall be harnessed by the developers to build stages that are rewarding the player both instantly and in the later parts of the game. This will build engagement through incentivization to establish a positive impact on their minds. Gratifying and achievable tasks enhance the playability exponentially.

The end results for each activity are essential parts of the event. The unconcluded contests and late outcomes frustrate people which ultimately reduces the interest towards playing. The inclusion of health/ammunition matrix, the achievement of the objectives, receipt of points and badges are some of the most widely used forms that are placed on the screen itself. To understand it in layman terms, if your payroll software makes disbursement but fails to acknowledge breakdown that on its payslips, you will feel dissatisfied as an employee. The same logic applies to gaming experience as it is expected to get conclusive endings to all activities.

Summing Up: The dilemma of designing ‘experience’ for mass consumption that is personally associated by anyone.

The author would like to acknowledge that designing experiences cannot be described as an external entity-oriented procedure, and hence, there are no definite set of bounded rules and regulations that ensure success. The impact of each element shall be examined by the developers and production team themselves so that an optimal ‘gaming experience’ consists of motivation, difficulty, ease of understanding, manipulation rules, plot, and positive engagement which is encompassed in the UI in a well-calculated and streamlined series of events.