Hey! My name is Stas, I am an independent game developer (our team has released just one game on Steam, but nevertheless). Our first game experienced a long and tough development, with a very weak start in August 2016 if compared with the other indie-games it was competing with. However, in the 2 months after the release the game managed to pay off all its expenses and slowly started earning. Unfortunately, shortly after sales dropped down to indecent levels that couldn't support further game development, so my team and I went on to concentrate on various solo projects. By the end of 2016, 6500 items were sold on Steam and 13,000 more in third-party shops and as a part of bundles.

As last year came to a close, I was convinced that the main shortcoming of the game was it's name, "The Tribe". The title caused problems with search engines, as the immense amount of content about actual tribal groups dwarfed results relating to the game. But on January 2nd of 2017, almost five months after the release, we received a letter concerning a trademark dilution from the company Сooper Media Corp over a game called "The Tribez" (Cooper Media tightly connected with Game Insight). Cooper Media demanded the name of our game be changed to something that was not "confusingly similar to" their trademark in order to avoid legal consequences. The full text of the correspondence is attached as screenshots (mostly in Russian, with text translated). 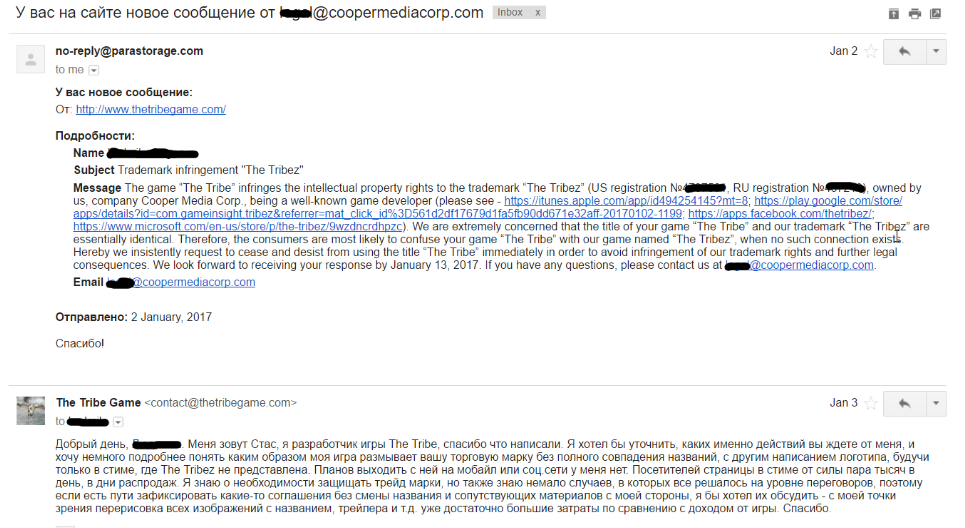 Name ***
Subject Trademark infringement "The Tribez"
Message The game “The Tribe” infringes the intellectual property rights to the trademark “The Tribez” (US registration №****, RU registration №****), owned by us, company Сooper Media Corp., being a well-known game developer (please see - https://itunes.apple.com/app/id494254145?mt=8; https://play.google.com/store/apps/details?id=com.gameinsight.tribez&referrer=mat_click_id%3D561d2df17679d1fa5fb90dd671e32aff-20170102-1199; https://apps.facebook.com/thetribez/; https://www.microsoft.com/en-us/store/p/the-tribez/9wzdncrdhpzc). We are extremely concerned that the title of your game “The Tribe” and our trademark “The Tribez” are essentially identical. Therefore, the consumers are most likely to confuse your game “The Tribe” with our game named “The Tribez”, when no such connection exists. Hereby we insistently request to cease and desist from using the title “The Tribe” immediately in order to avoid infringement of our trademark rights and further legal consequences. We look forward to receiving your response by January 13, 2017. If you have any questions, please contact us at ***@coopermediacorp.com.

Stas:
Good afternoon, ****. Thank you for your letter. My name is Stas, I am a game developer of The Tribe. I would like to clarify what exact actions are you expecting from me, and also I want to have a deeper understanding about how my game causes a trademark dilution, because there is no complete match of names, the logos are different, and my game is only available on Steam, where The Tribez is not presented. I do not plan to release my game for mobile phones or on social media. There are not more than a couple of thousand visitors on my Steam page even on sale days. I am aware of the need to protect trademarks, but I also know many cases, when everything was solved by negotiations. Thus, if there is a way to make an agreement and leave the name and related materials without a change, I would like to discuss this option. From my point of view, editing all the images with the game’s name, changing a trailer, etc. entails more expenses than the income the game creates. Thank you.

Lawyer:
Dear Stas!
Trademarks «The Tribe» и «The Tribez» are confusingly similar and can mislead the users. To be recognized as confusingly similar, it is sufficient to have similarity in one of three criteria - phonetic, graphic, semantic. Phonetic and semantic similarity exists, despite the difference in logos. Trademarks of the Russian Federation and the United States are registered for the corresponding classes of goods and services. The above trademark "The Tribez" is registered for the class "video games" and "entertainment services" without the need to specify the platform of allocation..
In accordance with applicable international law, the right holder may, in its sole discretion to prohibit others to use the means of individualization owned by the right holder.
Based on the above, we ask you to take immediate measures to address the violations of the exclusive rights of the trademark "The Tribez” in order to avoid further legal consequences.

Stas:
Good day, ***!
What about the name "Tribe: The Great Pass"? Is it different enough to not be considered as confusingly similar to your game? Will that be enough to change the name on Steam and titles on the logos, or is there more items to be changed? 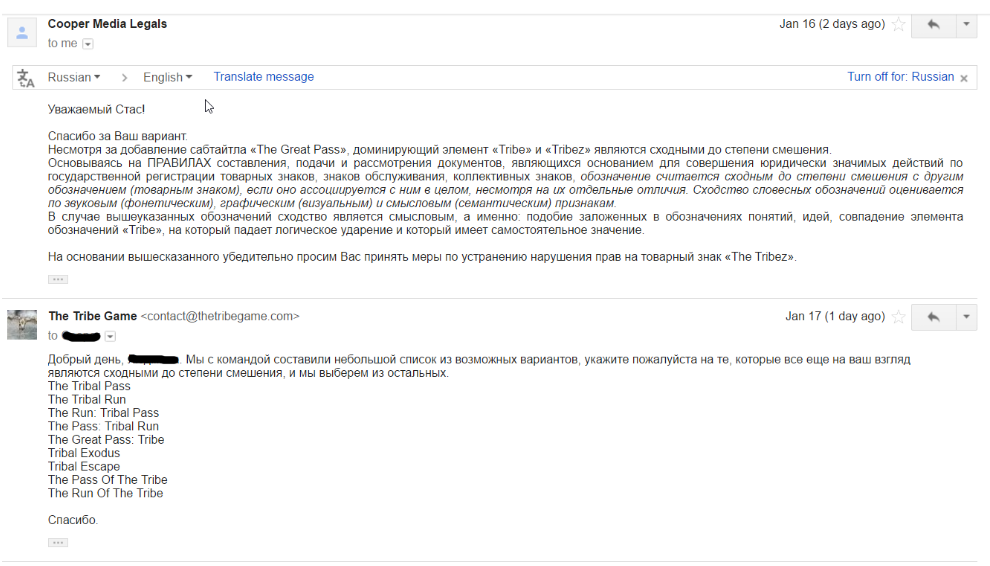 Lawyer:
Dear Stas!
Thank you for your option.
Even though you added the subtitle «The Great Pass», the dominant elements «Tribe» and «Tribez» are still confusingly similar.
Based on the rules for filling in, submitting and reviewing of the documents, which are the basis for the performance of legally significant acts on the state registration of the trademarks, service marks, collective marks, the name is considered confusingly similar to another name (trademark), if it is associated with it as a whole despite their individual differences. The similarity of verbal designations is assessed by the sound (phonetic), graphic (visual) and notional (semantic) features.
In the case of the above names the similarity is semantic, namely the similarity of the concepts embodied in the notation, ideas, match of the element of the designations «Tribe», which has a logical stress falling on it and which has self-sufficient meaning.
Based on the above, we kindly ask you to take measures to eliminate violations of the rights of the trademark «The Tribez».

Stas:
Good day, ***.
My team and I have compiled a list of possible options. Please select the ones that are still confusingly similar according to you, and we will choose from the rest.

Thanks for the proposed options.
We agree with any of your choice, which does not contain the word "Tribe", namely:

The above-mentioned options are not confusingly similar to the trademark "The Tribez" of the right holder Cooper Media Corp.

In general, I fully understood this move as well as the need to protect the brand, and I was ready to change the name of the game without any objection, but the only thing that bothered me was the half year delay.
During our correspondence, lawyers made the reason of the trademark dilution clear: “In the case of the above names the similarity is semantic, namely the similarity of the concepts embodied in the notation, ideas, match of the element of the designations «Tribe», which has a logical stress falling on it and which has self-sufficient meaning.”

But in the very next letter, the lists of the names proposed by us (for example, "The Pass Of The Tribe") were rejected only on the basis of the presence of the word "Tribe" at the end of the name, - even though there is no logical stress on this word, in our opinion.

Being a very small and not too prosperous indie developer, I wasn't prepared to participate in the long legal proceedings or to change the promotional materials of the game a few times, so I agreed to change the name without resistance on the proposed terms. However, it seems to me that the demand to exclude the common word "tribe" from the name of the game at all (having a trademark of a non-existent word "tribez"), given by a huge corporation sounds not nice at all.

I believe it is my duty to warn all other indie developers who expect to be able to "just do the game". Be prepared for claims such as ours, and either lay the budget down for legal expertise or try to create enough variation in your name. Ideally, if you do not want to experience the same situation, simply check lists of registered trademarks first as they are public information already.

If you think that in changing the name, you are only losing only a few days while your artists redraw logos and edit the trailer, think about how difficult it was to get any publication on gaming media or getting video reviews from Youtube bloggers. Now, a potential buyer searching with the new name can no longer find all the media under the old one. In our case, we have lost several hundreds of video reviews, some of them with tens of thousands of views. It is pointless to hope that with a new name the game will find a second wind when in fact the opposite is much more possible: the sales will be even lower due to lack of relevant reviews. 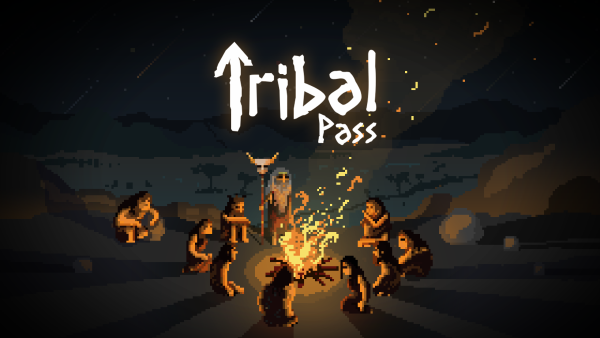