Launch Day Depression (And Why I'm Over It)


After five years of solo-development, I launched my first commercial release Pinstripe on Steam in 2017. So much mental and emotional energy went into Pinstripe, and I’ve kind of blocked out the turmoil that went into it. You might think I’m exaggerating, but I'm not. I’m trying to be more honest lately and that’s me being honest.

For my next major release, Neversong, things feel a bit different. Actually, they feel a lot different. My hope in writing this is to give indie game devs perhaps a few pointers, and even some hope, that game development doesn't have to be a miserable nightmare.

From securing partnerships to more reasonable revenue expectations, I’ve matured into a level-headed indie game dev, just in time for Neversong's launch. By the time you’re reading this, it’s hit Steam, and hopefully you’ll give it a shot and enjoy it (it's 15% off cough cough). As for me, I’m already working on my next project, drinking beer, listening to lofi, and grateful just to be making games, regardless of Neversong’s performance. So, here are three reasons why I’m not a miserable mess this time around:

This is me right now. Promise.

Most indie game devs out there are basically gambling. We spend our time throwing money (remember, time is money) at a project we think miiiiiggghhhhtt be successful, but for many of us, turns out to be a money pit. And it’s addicting too, isn’t it? Dreaming of becoming the next Edmund McMillen, Notch, or Jonathan Blow. In 2014, making and selling indie games was so much easier than it is now. With only 1,771 games released in 2014 on Steam, over 9,000 games were released in 2018. According to Kotaku, the average solo game dev in 2014 made about $11,812. Indie teams faired a bit better with $50,833. I can’t imagine it’s gotten any better 6 years later. In fact, I’m sure it’s become exponentially worse considering the amount of competition. 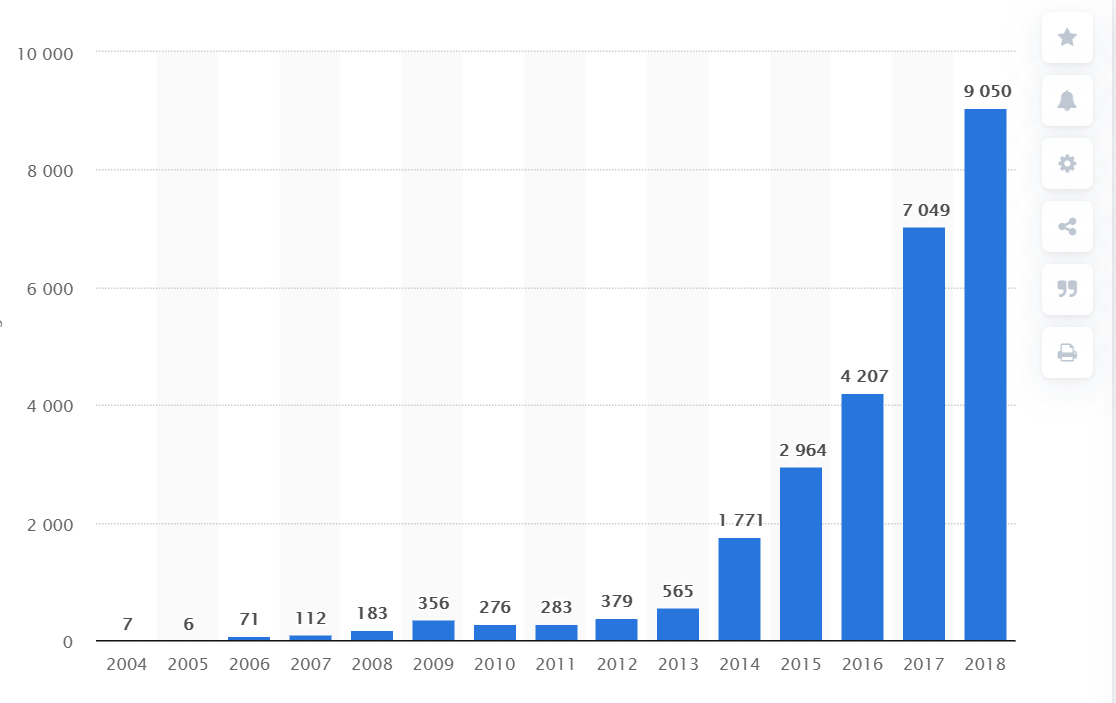 This is the sad reality.

After Pinstripe’s mediocre release, I knew I needed a reliable source of income, generated almost automatically, if I was to make it through Neversong’s development without going absolutely crazy. I remember putting together a pie chart on my garage office white board, and crossing my fingers that it would work. It has actually.

With a consistent six-figure annual income from various sources, I was able to make Neversong without worrying about whether it’s launch day would save me from losing my studio, my home, and any credibility I had with my little growing family. Keep in mind some of these income sources are things like Kickstarter and publisher advances. I’ve made sure to split these up over more than several years of making Neversong. Also, please keep in mind all of these income streams started popping up after the Neversong Kickstarter campaign launched, as I realized the campaign, honestly, had not raised enough to support the game's entire development. This is just an estimation, so take it with a grain of salt: 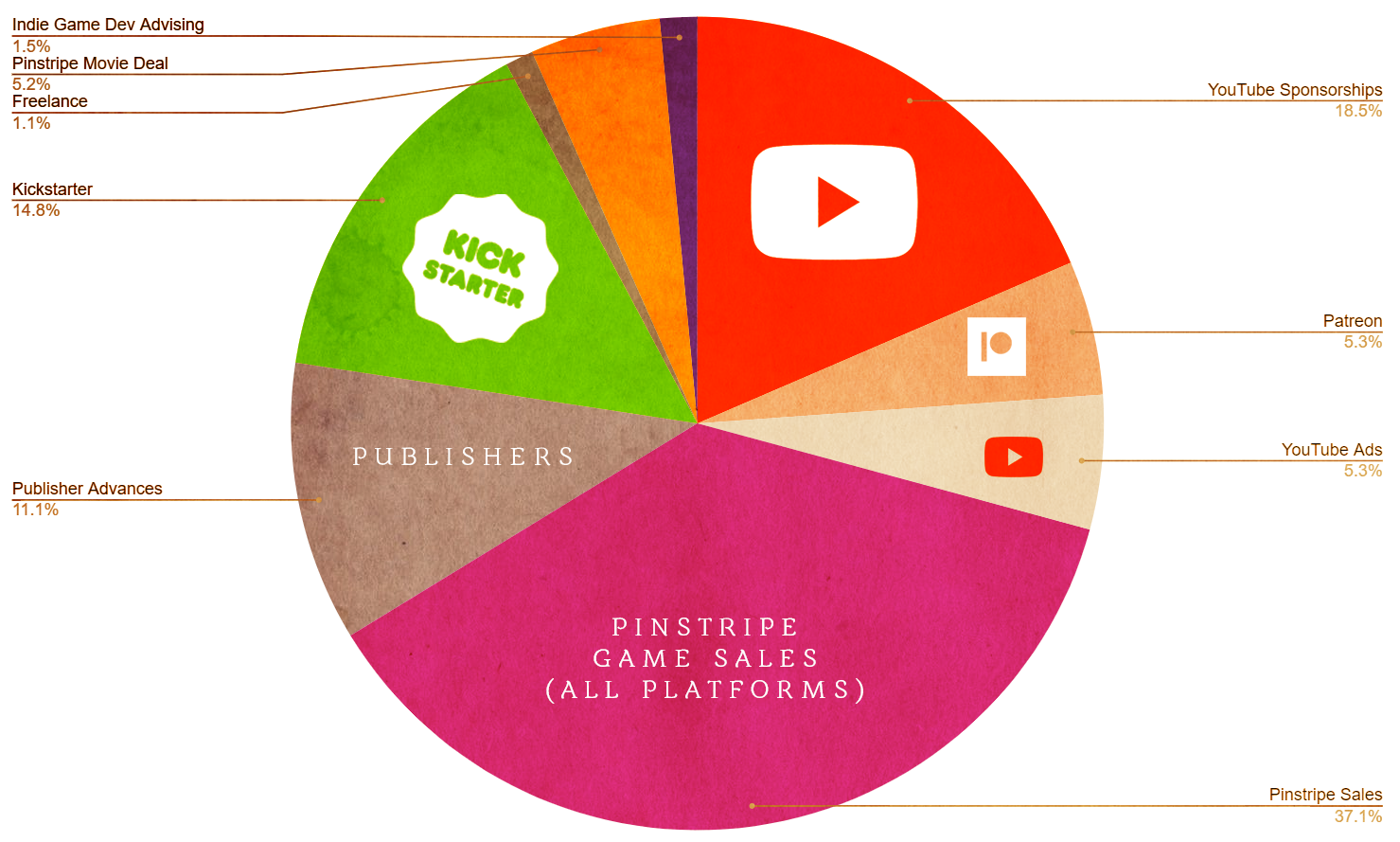 Note: I can’t show actual numbers here. This would disclose private information from contractual agreements that included NDAs. Regarding Kickstarter, please note the final Kickstarter campaign funds raised were actually split up to a degree among both Serenity Forge, the project publisher and development partner, and I.

If I had not pursued publishing deals, YouTube sponsorship deals for weekly videos on my YouTube channel, a small drip of Patreon support, YouTube ad revenue, and a few small gigs as an advisor and freelancer, I would have been depending solely on the pink: Pinstripe sales. Remember, running a studio is more than just paying your rent and grocery bill. The costs slowly add up, so having reliable income streams can keep you sane. Fortunately, I know that if Neversong under-performs, I’ll be just fine. Mainly because of reliable income streams intentionally pursued and planned. In all honesty, Apple has provided a bit of a cushion for my studio. However, I have not included those numbers in this pie-chart, because, quite frankly, it came about at the tail end of Neversong’s development. Additionally, considering most dev's won't be working with Apple, I'm trying to show the various drips of income outside of Apple, and thankfully, my studio will be OK even without an Apple deal.

I'm sane as I write this article not only because I know I’ll be OK financially due to various drips of income, but also because I have a decent idea of what revenue should look like, not only on launch day, but also long term.

When I launched Pinstripe in 2017, part of me thought I would make a million bucks, but a huge part of me planned on making nothing. With a baby girl on the way, a mortgage, and a wife who was about to quit her job, you can imagine the mounting pressure and worry about whether Pinstripe would be able to provide for my family. On launch day, it became increasingly clear that, after the Steam cut and publisher cut, the revenue would not be enough. After a hefty (yet fair) publisher recoup I was left with less than what was needed for my annual salary.

Remember the publisher fee was to be recouped? So yeah. I made nothing for a couple months. As you can see below the sales slowly flattened, and I was devastated.

What I didn’t understand is that future Steam sale events were kind of like mini game launches. Various pops of revenue came throughout the year, especially during the Holidays, and we also participated in various bundles (including Humble Bundle), and even a Steam daily deal, which is that giant spike below. That was a great day!

Additionally, I learned that revenue slowly add up from various platforms. It’s amazing how a small drip of revenue can become a waterfall once your game is on pretty much every platform.

Nintendo Switch performed wonderfully when we launched a year later. PS4 and Xbox were not so great, though, but honestly I’m not surprised. So, what I realize now is I should have been at peace during Pinstripe's launch, I just honestly didn't know what to expect.

All that said, for Neversong’s launch, I’m at peace knowing if launch doesn’t go perfectly, the game will still sell plenty of copies with the various Steam sale pops of revenue, and likely match or out-perform on Nintendo Switch. It’s all about the long game, so don’t panic when things don’t play out exactly as you would have hoped on launch day! In the end, Pinstripe has actually grossed a decent amount, and I’m more than proud of it. I know that at the very least, Neversong will likely perform similarly, and that’s comforting.

The stress of launching a game solo is insane. It’s honestly not healthy. Some people are made to do this. Not me. 2017 was one of the hardest years of my life, and I just wasn’t willing to do that again for Neversong. Now, I’ve got a team of developers going to war with me. I've partnered with a developer and a publisher, Serenity Forge. In 2017, I pitched them a couple sentences over the phone regarding Neversong, and they immediately loved it. They agreed to publish and also develop Neversong, in exchange for a reasonable rev share. I would be the artist, musician, story-teller, game designer, and lay out the levels, and they would code the game from scratch per my direction. I also hired out several interns, and even worked with an ex-Blizzard artist Peet Cooper, whom the protagonist of Neversong is named after. It’s been an amazing experience, and we’re all friends because of it. It feels amazing knowing Erik, Z, Kevin, Kersti, Hector, Tripp, Phil, Adam, Peet and myself are all in this together, and working hard to see a successful launch.

Wait. Hold on. I was about to conclude here, but I forgot something!

Apple came into the development cycle at the eleventh hour, and funded a mobile port, along with 14 languages, and a ton of upgrades and updates to the game. It’s been amazing working with them, and I’m thrilled to see Neversong coming out on so many platforms. Yes, their support makes this launch 100x easier, but I can honestly say my maturing as a game dev has really given me some peace, especially the various dripping income sources outside of Apple.

In conclusion, this launch is heavenly. It just feels totally different, and it’s all because I’ve been resilient enough to build various income streams, wise enough to look at long term data, and humble enough to ask for help from various partners.

If you’re interested in playing Neversong, it’s 15% off on Steam right now! I’d love to hear your thoughts on the game.