In the course of last year we, SassyBot Studio and Mattia Traverso, created an application called Dear Stranger. IÂ have written a little bit about this before on our blogÂ but the experience and lessons gained were otherwise largely left undocumented. What you read in this blog isÂ my perspective on how we approached making Dear Stranger. Dear Stranger was the result of a 72 hour hackathon/game jam. Even though it has been quite a long time since we created this application, IÂ have not yet taken the time to explain exactly what Dear Stranger is and how it was made.Â In order to make sense of it all, I will explain the event that motivated us to createÂ Dear Stranger,Â the thought process behind creating it, and how it exactly works.

In June 2014 an event called Visual Design Week XS was organised toÂ promote visual culture in Breda, The Netherlands. As part of this week aÂ hackathon/game jam called 'Hack the Park!' was organised. This event was a competitive challenge with severalÂ constraints as well as a reward for the winning team. Some of the constraints were:

Design constraints are great for coming up with unique concepts and can help narrow the focus for new and refreshing concepts. It can also reveal possibilities that were otherwise not consideredÂ feasible.

The thoughtsÂ behind Dear Stranger

When you get to work with technology that is different from what you are used to it is often the challenge to imagine what the technology enables you to doÂ which would otherwise not be possible. Of course you can use an existingÂ game concept and make that work with new technology but is that really exploring the possibilities of that technology?

Some of the new possibilities that we arrived at included making use of the connectivity and mobility of the smartphones. Additionally, some phones have very cool techÂ such as gyroscopes, advancedÂ cameras and powerful hardware. However, we knew that if we decided on using too much exotic tech that we couldÂ exclude certainÂ usersÂ from using the app. Furthermore, in the case of gyroscopes we have noticed that this is not yet that reliable on different devices.

Keeping all of these things in mind we started brainstorming all kinds of crazy ideas. EventuallyÂ we landed on the idea of letting people leave hidden messages in plain sight. Considering the time and tech constraints we felt that this concept was simple in mechanics, could be executed nicely in terms of aesthetics, and would allowÂ some interestingÂ dynamics to emerge for its users. Furthermore, after getting the minimum viable experience up and running during the jam we were able to quite easily expand and polish onto this core concept. The concept finally evolved into the simple notion of having a public, but hidden, message board with a unique and fitting presentation. We called it, Dear Stranger.

Allow me to pitch to you the application that we created. "Dear Stranger is an augmented reality application for smartphones that lets the user leave a single message per day in the formÂ of a flower. Users can read messages left by other strangers and tweet those you think are great. Explore a garden of thoughts and conversations as you see it grow over time." While we developed this application with user experience in mind I can't help but notice that Dear Stranger lends itself nicely for an analysis using the Mechanics-Dynamics-Aesthetics (MDA) framework (R. Hunicke, M. LeBlanc, R. Zubek - 2001). To explain this framework briefly,

In the case of Dear Stranger this would look a little similar to this.

This application was developed using Unity3D 4.6.3f3 and made use of a plugin from Qualcomm called Vuforia. The models were created in 3Ds Max and the textures were hand painted in Photoshop CS6 using a Wacom Bamboo drawing tablet. The interface assets were also designed using Photoshop CS6.Â The flowers are coloured using vertex paint in 3ds Max.Â We used a custom shader in Unity3D, limitingÂ us to 300Â vertices per flower. The reason for staying below that specific vertex count is so that we can make use of dynamic batching which is a blessing for performance on mobile devices. 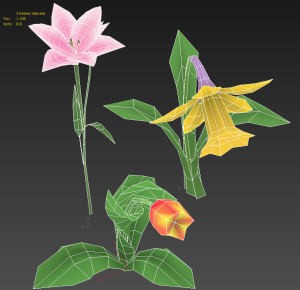 Above: vertex painted flowers below 300 vertices each (click to enlarge). 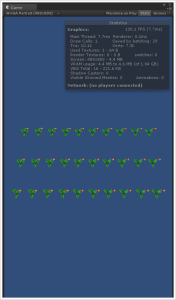 Above: optimised performance as a result of vertex painted and low polygon modelsÂ (click to enlarge).

Textures were, for the most part, placed on a couple ofÂ texture atlasesÂ before implementation in Unity in order to save memory and processing power. Player feedback on the flowers consisted of an animated sprite, aimed atÂ the camera,Â that changed animation behaviour or colour depending on whether it was read or tweeted. Extra attention to detail was spent on animating the GUI by scaling when prompted, sliding text in from the side, and briefly highlighting a button to indicate it was pressed.Â An orthographicÂ Unity cameraÂ wasÂ used to render the interface on top of the augmented reality layer. More about layering cameras can be read in our Elimu post-mortem.

Above: two texture atlasses of which the last is shown with a dark background for clarityÂ (click to enlarge).

We limited the user to 126 characters so that we had 14 characters left to add " #DearStranger" allowing us toÂ comply with Twitter's character limit. To store and pull user messages we used a database that would keep track of what the message contained and when it was posted. Using these dates we could set up a normalizedÂ slider that ranges from first posted messageÂ to the last posted message. To make the placement ofÂ customÂ text easy we used a small script that allows for word wrapping. When typing a message the application will use the keyboard provided by the smartphone's OS.

Hopefully this article has given you sufficient insight in how Dear Stranger was created and some of the though processes behind it. If anything is unclear then I am happy to elaborate.Please get in touch via @tinovdkÂ with any questionsÂ and I'll help to the best of my ability.

[Update] Added credits and a disclaimer