Meet The New Boss... Same As The Old Boss

Ever since a certain irascible primate began throwing barrels at Mario, boss battles have been an inextricable part of gaming history. From classics likeÂ MetroidÂ to modern-day epics like theÂ God of WarÂ series, they've long served as a point of climax; a final test of all the skills that the player has been challenged to master throughout the game. Their evaluative function is often paralleled with the development of the player character, or the themes of the campaign's story. For a long time, this was the standard, but with many indie developers questioning the way we tell stories and cultivate immersion, I was brought to question whether slapping a health bar on something and being told to hit it with sharp objects is always the best way to remain true to the essence of the experience that developers and writers originally set out to create.

Â As with many of the questions I find myself asking about games these days, this one was initially perked while playingÂ Bioshock: InfiniteÂ (NOTE: Minor, non-plot related spoilers for that game just ahead). I found it surprising that despite his ominous presence throughout, the player is never forced to fight Elizabeth's jailor and guardian, The Songbird. Initially, I was annoyed by this, but then questioned whether the tragic ending to Elizabeth and Songbird's story would have been as affecting if it had come in a cutscene following a traditional boss battle. I feel as though reducing Songbird to an obstacle to be overcome, and putting the player into the mode of memorizing canned attack animations and feeding clips into yet another bullet sponge, would greatly diminish the significance of the character and his relationship with Elizabeth. I consider it very much the inverse of your dynamic with Elizabeth: because you don't have to worry about keeping her alive (notÂ reducing her to an objective or chore), the player is given more opportunity to focus on the emotional aspect of your relationship with her, creating one of the more empathetic NPC's in a video game in some time.

We can see the problem with jamming the traditional boss battle in where it doesn't fit withÂ Batman: Arkham Asylum, with the final fight against a TITAN-infused Joker. Even non-comic book readers understand that the relationship between Batman and The Joker is one of the most complex and nuanced in the medium, and the remainder of the game is excellent at boiling that relationship down to its essence within an 8-12 hour campaign. Joker constantly taunts the dark knight from the shadows, forcing him into more and more difficult situations, attempting to break him mentally and emotionally through a variety of means.

And.... then he gets turned into a pasty-white rage monster (with an admittedly bitchin' mohawk), and the player is forced to fight him in a fairly uninspired arena battle. While functional, the point is that you could easily replace the Joker with any other 'roided up goon, and still have the same fight. This choice divorces itself so completely from the existing atmosphere, that I'm reasonably convinced the only reason it was done this way is that boss battles are, traditionally, the way to end games.

Even when considered separate from the ambitious, overarching themes of story and character, the inappropriate use of bosses can be detrimental to the emotional gameplay experience. Horror games provide a great example of this. Take for example, the contrast betweenÂ Amnesia: The Dark Descent, andÂ Dead Space 2. InÂ Amnesia, you're tasked with uncovering clues to the fate of a castle lord, scrambling through dark hallways while a walking horror keeps an endless vigil, prowling the castle for intruders. It should be noted that the game has no combat mechanic: should you encounter this shambling horror, the player's only hope for survival is to run, hide in the dark, and hope that it doesn't find you. The sense of helplessness this creates makes for some great moments of tension (and even better YouTube compilations) and as a result,Â AmnesiaÂ is often considered one of the scarier games in recent years.Â Dead Space 2, on the other hand,Â didÂ scare the bejeezus out of me;Â however, aside from the occasional well-placed jump scare, it only did this consistently for the first few hours. After that, I'd amassed a number of weapons, and my understanding of how enemies could be dealt with was such that I never saw them as powerful or intimidating. I can simply whip out my plasma shotgun or energy cutter, and every necromorph could be turned into bloody pulp the same as the next. The boss battles are a distilled version of this âif it bleeds, we can kill itâ mentality. But because of their function as an evaluation of the players' accrued skills, they will always frame the fight in the context of being a problem to solve: a pattern to memorize, a weak spot to shoot, etc. The result of this is that no matter how big and horrifying a boss creature may be, it will never be any more scary than a particularly daunting final exam. 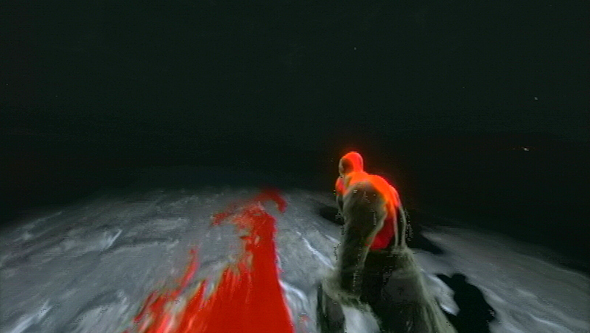 You may be getting the impression that I think boss battles should be done away with entirely, but nothing could be farther from the truth. When appropriately utilized, a well-structured boss fight can be just as emotionally evocative and satisfying as any other experiential tool in the game designers' arsenal. God of War's skyscraper-sized confrontations have provided some of my favourite, most exhilarating gameplay experiences.Â Shadow of the ColossusÂ can boast the same, while still delivering a sobering, pensive narrative, with their epic titans comprising its emotional core.

Issues arise when developers make the mistake of believing that they are always the best tool for the job. Though known for its bosses, the thirdÂ God of WarÂ game in particular has its most affecting and thoughtful moments not in your final confrontation with Zeus, but arguably in an entirely non-combat based sectionÂ withinÂ that fight. The same can be said for (of all games)Â Call of Duty: Modern Warfare, or the originalÂ Bioshock. InÂ Arkham Asylum, the haunting re-enactment of the worst night of Bruce Wayne's life (courtesy of Scarecrow's fear gas) captured the demons Batman faces far better than a typical brawl. It's in being able to choose when to employ the use of bosses, and when to diverge and try something different, that we are given some of our richest gaming memories.

Even when the decision is made to use a boss, the stereotyping of what that necessarily implies need not continue. In the second video of herÂ Tropes vs WomenÂ series, Anita Sarkeesian makes the apt observation that men playing video games are often only given one tool to deal with a problem: violence.

In addition to the sociological problems this may present, it also diminishes the medium to repeatedly fall back on violence for every situation, even ones where the solution of "shoot this guy in the face" may be an ill fit. For instance,Â Deus Ex: Human RevolutionÂ showed us that a verbal battle can be just as engrossing as a physical one. BothÂ Halo: Combat EvolvedÂ andÂ Transformers: Fall of CybertronÂ chose to forgo a singular, arena-based conflict, but still delivered incredibly tense and exciting final levels of their campaigns. That's not to say that there haven't been an equal number of underwhelming last levels without bosses, but I would argue that at least these developers are attempting to evolve the medium in ways that expand upon its massive well of untapped potential. Hopefully, as designers more readily realize that their toolboxes contain more than just a hammer, not every problem will look like a nail.