Toto Temple Deluxe: From The Idea to The Final Product

Before I begin, little announcement: The game is out, so check it out here! 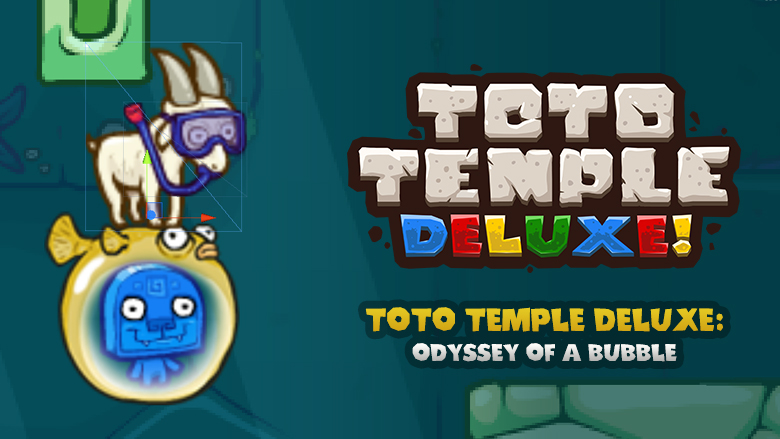 *This blog post has been written by Alex, our lead programmer. You can read his original postÂ on our website.

A game can be fun for only so much time if there is no variety and no depth in it. This game must have some different assets and mechanisms to keep things fresh, but it is very important that they are compatible with the goal and the gameplay of the game.

Odyssey of a bubble

Designing a game with an appropriateÂ difficulty curve is something really hard, but what happens when you try to scale difficulty, but without a curve? Okay, the game is a multiplayer arena brawler so the difficulty "curve" is usually out of our control but pretty organic, but we must design these arenas and assets to fill them with interesting twists.Â Newcomers can start their experience in any level in Toto Temple and seasoned players could share the same environment as newcomers.Â So we want assets and mechanisms that keep things interesting for advanced players, but do not put off the others. Seriously, it is easier said than done, but let's see how weÂ made itÂ through the story of an asset in the game: the trapping bubble.

It all started with a mine. The idea was to introduce a player induced variable in the level design in the form of a powerup, so every time you play a level, it never is the same, the âforbiddenâ areas are never the same and you must adapt to this, as well as giving depth to the game, by enabling tactical placement and usage for more advanced players. The intentions were noble, but the end result was not exciting enough to warrant the detour, this is when the mine morphed into a ball.Â

This ball would float in the air, and when it is hit by a dashing toto, it would get kicked and be dangerous for a short time, a little like the soccer ball in Super Smash Bros. This alone would certainly still be not enough an advantage as the ball would be difficult to kick in the right direction.

So we added a lasting effect: with the 4 first collisions on the walls that the ball does, it creates a static charge (a little electric ball) that crawls along the surface it touches, a little bit like the sparks (the sun type thing) in Super Smash Bros (I think our inspirations are clear to you now). The idea was cool, it still promoted the idea that players would change the layout of a level with a simple input (when a spark would run along a small block, the area would be dangerous), the choices were more obvious (kick the ball, see what it happens), the strategy was still there (try to stay near your sparks to trap opponents) and the effect was theorically strong enough to make the player deviate from itâs main goal: the goat.Â

Too hard: stepping back

This is a good asset yet? Nooooâ¦ all those sparks spinning around added confusion and much unwanted difficulty and the stun effect was only frustrating. A bad experience ruins the mood of a player, even if the event lasts a couple of seconds, it may continue to alienate him for a while after.Â

Then came an idea: no environment/level induced harm would result in a stun/paralyzis/points loss, we must find special and interesting punishments. What if instead of paralyzing, the ball would trap the first person it touches inside, leaving it to float along with it? Of course, the player would be able to navigate, but the navigation would be altered (pushing a bubble from the inside instead of normal platforming). This would also allow for a much longer punishment while not really frustrating the player.Â

Still too hard for newcomers

Trying it, the mood already improved, but still, something was off: no matter the reward, those with little experience could care less to hit a ball when there is the point-giving goat running right next to them, so it became only an hindering assets for newcomers, something that would turn them off because they would fall victim of the ball often and never really use it.Â

Not a weapon, a pure obstacle

So our conclusion was that the ball should not be kicked to be a threat. It basically became a level asset that moves around and tries to trap you into it. This design ensures that the advanced players donât have the edge of using them as weapons, but still they have the advantage of beign more aware of them and can avoid them more easily.

After debates that lasted for wayyy too long, we finally came to the conclusion that no level asset should be simply hindering, in some ways one would want to be affected by the asset to his advantage in certain situations as much as trying to affect the other totos with the same asset in other situations. So any assets that produces a clear disadvantage no matter the situation will not be included. This includes any type of sustained stun or crippling in any way.

One other thing about the bubble is that it would be placed in locations where it could create ambiguity, like when the bubble is placed in a narrow passage where there is barely room for a toto to pass by, you begin to wonder if you can, or you cannot, if the risk is worth it, if there is another way to reach destination, and as the result of being caught must not be too crippling, many would just try to go through and be caught. All this thought process is rather demanding and a little bit uncomfortable when playing toto temple, so we try to be as clear as possible when a way is barred.Â

We had other ideas in mind, like a level in which the lava builds up, and eventually totos would have to kind of work together to press buttons to purge it while it wipes the arena, if you are not in a safe area you are penalized. Lava would make you run like crazy without any way to stop or dash. Touching lava would never be an advantage and it is a long cripple. And less experienced players would just be reallllly confused and they would spend more time on fire than notâ¦ frustrating.

With that newly acquired wisdom, we devised the final version of the bubble: in a level, acquiring the goat means being stuck in the bubble. The goal itself is to be stuck inside the bubble, then, with alternative controls, trying to keep the goat as long as possible. Also, the lava level now has geysers that makes you dash all the way through the level. The propelling geysers form a definite wall that blocks the whole way, it can be used as a fast traveling system and as a manually activated wall to trick your opponents.Â

You can activate the fire bursts by dashing in them or shielding near it, you can fast travel with them or trick your enemies into them and send them far away.

Each level has its own feeling, we did not want to make 30 levels that feel alike, with only different layouts, because we think that layout is a really small part of a level design, and anyway in Toto Temple, we can only have so many layouts because the goat carrier won't trap himself in dead ends, so if there is a dead-end, nobody will go there and the area is useless. So instead each level has its own mechanics that differ in feeling and quirks. For the Player induced level design I talked about at the beginning, we decided to do the mine level, where totos have to dig to get to the goat, then make their way to any goal. Other two levels only play with collision to trap or isolate totos. If you are isolated and have the goat, you are happy. The tiger level has kind of a trap that opens, let passage and close according to a timeline. The forest level has doors that close themselves behind the totos that go through.

In the mine you dig to get the goat, this creates a level layout that differs from game to game and even evolves during a game.

In the tiger level, this trap just goes on about its own business until a bad lucked toto happen to pass by and be caught in it, it can also be used to be safe for some time if you get caught when you have the goat. Great opportunity for feints!

In the forest level, there are doors that close automatically after a toto have entered, so they are kind of a go-to direction when you have the goat and you are chased, it switches and encloses the action from one side of the level to the other.

The fact that Toto Temple does not deal with elimination forces us to develop new ways to think to make the experience as varied, rewarding and engaging as possible. Furthermore, being an unknown game, we need to be able to hook new players into digging deeper in the game, so we need interesting challenges for advanced players that would appeal to less advanced ones. This led us to one golden rule: âno asset must be a purely offensive weapon or obstacleâ. We still have several ideas for new level designs in store, some of them will be released some time in the future, in the mean time, here is a challenge: can you come up with a level design or an asset idea for Toto Temple?