Game Design Deep Dive: Re-imagining the double-jump in The Messenger

The Gamasutra Deep Dives are an ongoing series with the goal of shedding light on specific design, art, or technical features within a video game, in order to show how seemingly simple, fundamental design decisions aren't really that simple at all.

Hey! I’m Thierry from Québec on the North-American East Coast. I’m here today to share a bit of my dev story and to look back on the iteration and thought process behind The Messenger’s core gameplay mechanic, the ‘Cloudstep’.

After working for almost a decade in servicing studios, I eventually started prototyping my childhood dream project with my buddy Philippe Dionne, the level designer. Combining our design inclinations with our backgrounds (Phil as an illustrator and myself as a programmer), we threw down for a few months during evenings and weekends until we had a first playable for what would become our first indie game. Sabotage was then founded in April 2016 and The Messenger launched August 2018! Unity is our engine of choice.

What: The "Cloudstep": A twist on the classic double jump mechanic

We wanted to make a ninja game combining retro aesthetics and modern game design. Something challenging enough to be picked up by speedrunners while also letting casual players enjoy the story. We also wanted all of this without the need for pre-canned difficulty settings. Instead, we were shooting for constant optional gameplay opportunities of varying challenge where traversal could either be quick or easy.

We wanted a hero that could defy gravity, resulting in the kind of on-screen display that can only make sense if you’re playing as a ninja. Fun for the players to manipulate, and impressive yet readable for the viewers.

To carry the game, we were looking for a simple mechanic that would remain satisfying throughout by constantly providing clear opportunities and micro-challenges, while also having the potential to be extended through upgrades, letting the ninja use precision and timing to become the predator instead of the prey.

The cherry on top of that abstract design vision is we liked the idea of having a game loop so microscopic it would apply moment-to-moment, at every second of every screen. In our case, it simply meant Combat feeding back into Navigation opportunities, and vice versa.

By combining all of these guidelines we obtained the Cloudstep, a mechanic that lets the player recharge their jumps while airborne by successfully landing an attack.

Why: It showed promise right away

The first prototype for the Cloudstep showed promise right away. It made traversal very engaging, filling every screen with opportunities to plan and execute on. Playing around with it put us in this highly aware state of trying to maximise air-time, organically creating a “floor is lava” kind of vibe.

Jumping off of conveniently placed lanterns was fun, but was too easy to read and execute a few levels in, so we decided to kick this [navigation ←→ combat] dynamic up a notch by also making hitting enemies trigger a jump recharge.  Now THAT’s a ninja!

The final step was extending the opportunities to the player by providing an upgrade that let them attack enemy projectiles too. All the levels were then designed in a screen-by-screen approach, where we made sure to always provide an easy, slower path along with a harder, faster and flashier path for those inclined to maximise the Cloudstep’s potential.

Every single screen was designed around this idea of having a slow and casual path that conceals a more advanced, much quicker one.

Result: Easy to read, hard to pull off

We ended up with the result we first set out to achieve : a ninja that looks the part! When we moved on to the production phase, Phil’s inspiration was constantly fed by the Cloudstep’s potential, and from watching different playtesters mess around with it. A lot of levels stand out visually in their layout since they are built around this very simple mechanic, resulting in patterns only The Messenger can traverse. 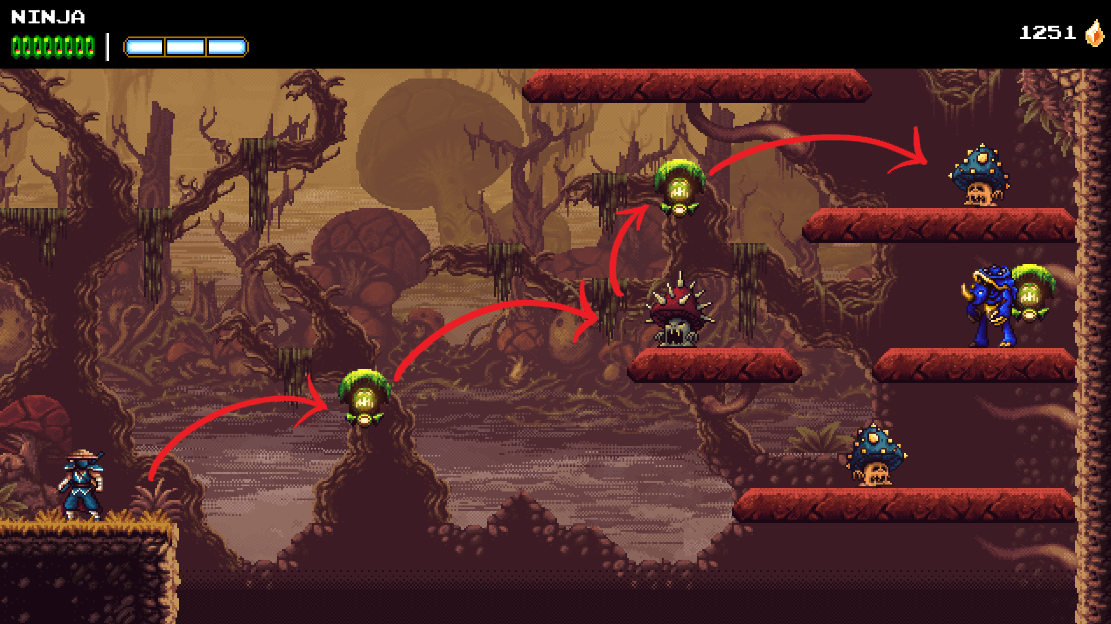 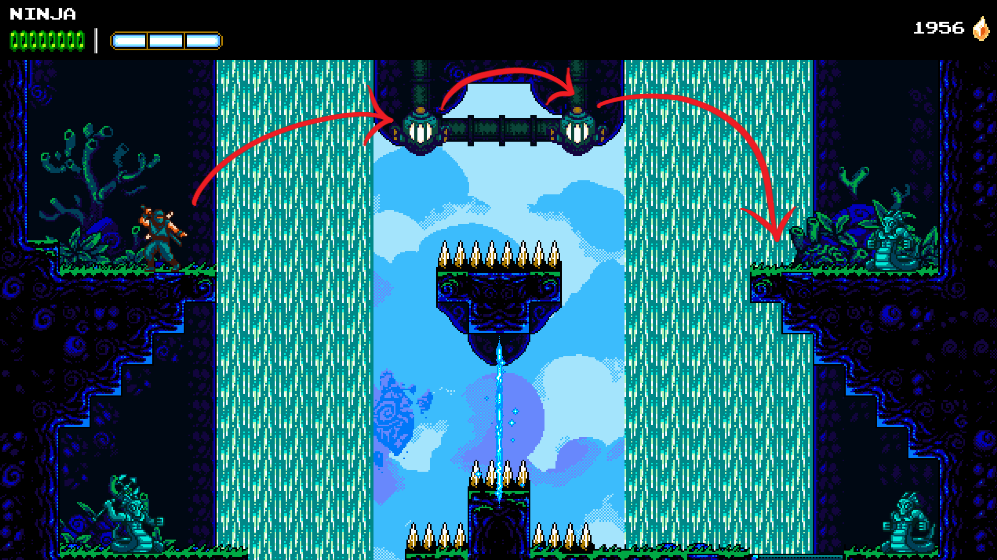 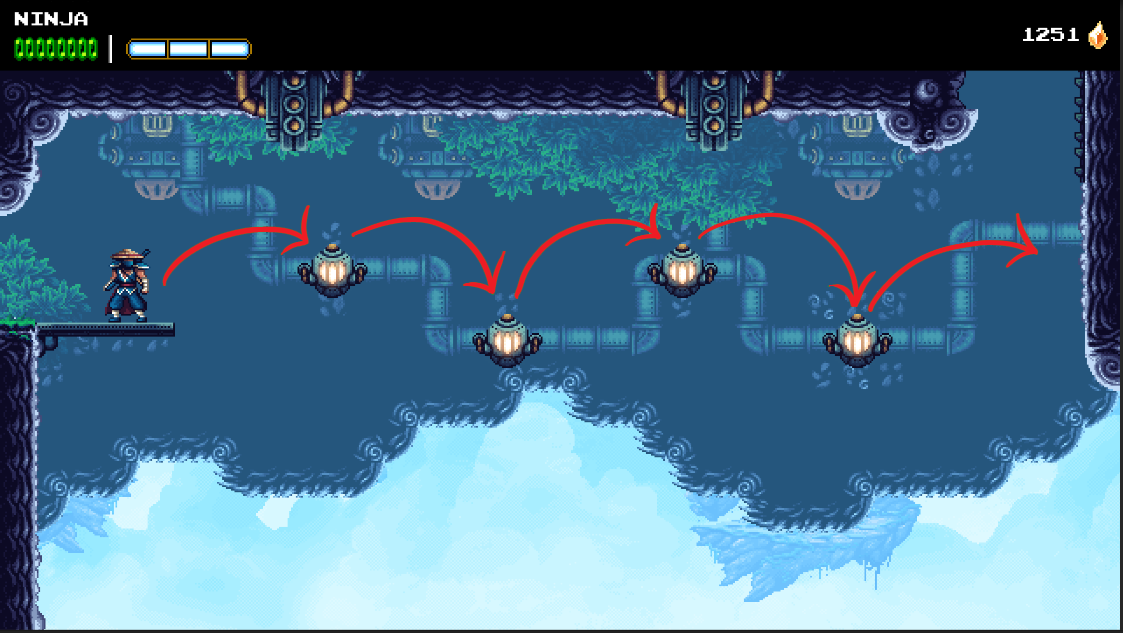 Difficulty: In playtesting the game, we quickly noticed that some more hardcore players were longing for the full potential challenge around the Cloudstep. In order to allow players of this type to meet their match without hindering the more casually inclined from enjoying the story, we decided to sprinkle ‘Challenge Rooms’ in every level, each presenting a specific challenge that is much harder than the main game’s path, offering collectible tokens as a reward. 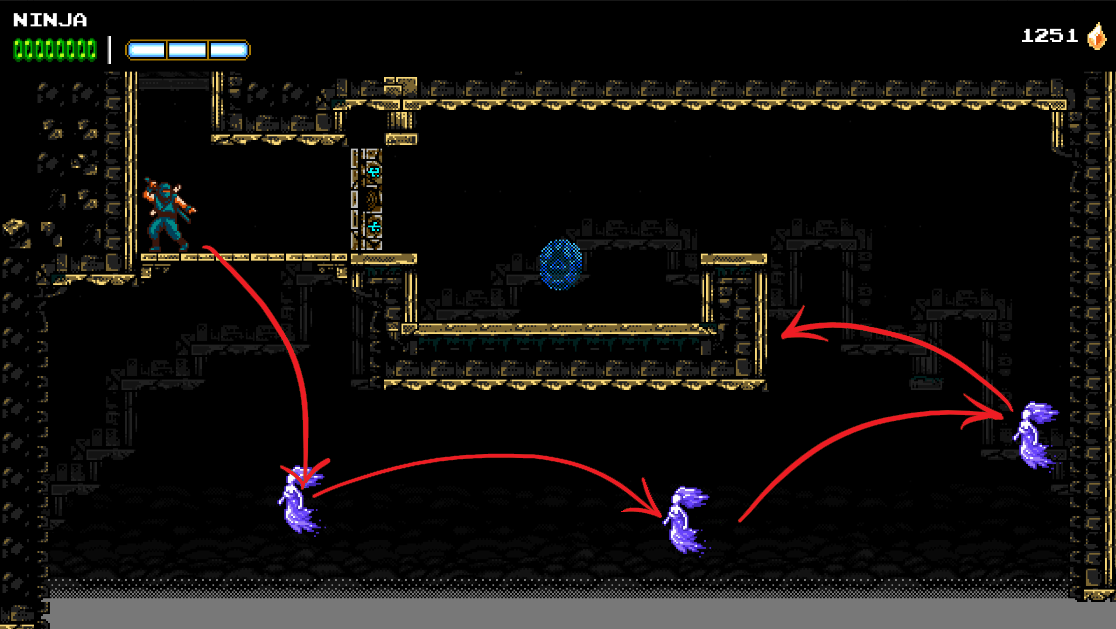 Adding these rooms went a long way in finding balance for the game’s difficulty, as we now had a space for extreme challenges, and didn’t have to worry about blocking casual players or leaving the hardcores on an empty stomach. Any bit that was deemed too hard could become a Challenge Room, and any level deemed too easy could contain more of those optional challenges.

Combined with other character upgrades, such as a wingsuit that lets the players glide, and a horizontal grappling hook to pull themselves towards enemies and walls, we began seeing some wild performances emerging from the speedrunning community.

When it comes to level design, while Phil certainly put in a lot of work, it’s fair to say that it flowed very naturally. By messing around with the mechanic, most of the effort was simply to let it emerge as what it was trying to be.

The key elements of our approach could be summed up like this:

There are obviously a lot of caveats to those points, especially when considering the type of game being developed, or the mechanic in question. For us, this principle of catering to the player’s expectations certainly made sense as we worked towards achieving tight controls, but in the case of the narrative and dialogue, expectations were the main ingredient to mess with.

Specifically to the Cloudstep though, since so much of the design iterations relied on watching people play with it, we did our best to build the game such that it would provide the opportunities players would instinctively be looking for. While being entirely satisfied with our work is something that is bound to elude us forever as creators, this approach certainly led to us being happy with our game, and that’s worth something for sure :)

The Outriders approach to looter-shooter design

Epic nets $1 billion in funding, including $200 million investment from Sony