What should Nintendo do now?


I've been in the games industry for nearly 15 years. First as a QA tester then a game designer and now one of those evil executives you read about.

I've worked in console, PC and now mobile. I'm known for my interest in free to play and disruption, but it's not that well known that I used to do remixes of classic Nintendo music.

As a Nintendo fan (my favorite game of all time is Link's Awakening) I've been thinking about the company's troubles for nearly three years now. At a high level, Nintendoâs problem is that they are failing to hit thier ownÂ sales forecasts: The companyâs expectation of how much their products will sell is behind what actually happens. They are banking on a level of success which is out of step with what game players think.

Here's some thoughts on what I feel the underlying problems are and a few suggestions for what they could do next.

In their heyday in the 90's, Nintendo managed to serve three distinct customers with pretty much the same IPs and product lineups.

The great news is that since the mid 90âs, the number of people playing videogames has increased greatly- This means that now each of these segments is big enough to support specific targeted products. The kids and casuals market has grown massively since the mid-2000s on the back of incredible innovation from Apple and Google as well as the rise of gaming on social networks, and the core market grew significantly in the late 90s and 2000s thanks to the aggressive market entry of Sony and later Microsoft.

The bad news for Nintendo is that now these three segments get special individual treatment, their old catch-all strategy ends up seeming like a compromise for each group.

In essence, many gamers feel like Nintendo products don't do a great job of serving their specific needs anymore, relative to other (newer) options.

How has the behaviour of these groups changed? I'll use anecdotal examples but there are wide ranging shifts with plenty of objective observation.

Many young kids (who would have previously played games like Pokemon or Mario on Nintendo handhelds and home consoles) are playing kid-specific games on smartphones, tablets and to a lesser degree PCs and Macs,Â specifically Minecraft. Toca Boca and Clumsy Ninja are examples of kidâs games my three year old daughter loves. My tween half sister and brother like PC/Mac games like Minecraft and mobile games like Angry Birds. Many Casual gamers (who would have previously played games like Brain Training and Tetris on Nintendo Handhelds) are playing games on smartphones and tablets. My mother, who was previously a Tetris and Nintendogs player on her DS, is now playing a lot of a Candy (â ¢) Crush Saga (â ¢) on her new iPhone and on Facebook.

Many hardcore gamers (who would previously have played hours and hours of games like Metroid and Earthbound on the SNES) are how playing games on HD consoles. Many of my friends who were massive SNES and N64 gamers in their teens are now playing Call of Duty, The Last Of Us and Battlefield on PlayStations and Xboxes

Nintendo needs to accept and embrace the specific innovations that have lead to many members of these demographic groups ignoringÂ Nintendo.

It also needs to accept the relative weakness of Nintendo in some of these areas.

- Smartphones and tablets are general purpose computing devices with a networking focus and touch screens. The games software for them is either free or extremely cheap and readily available via app stores They have extremely good user interfaces and a stylish design that works with all ages and sexes.

Nintendo in the past has produced cheaper, childish-feeling devices with relatively clunky interfaces and poor online features. They tend to sell games at high prices.

- Modern consoles focus on high end visuals, immersion, adult content and games that are as much passive cinematic experiences as they are interactive games.

Nintendo in the past has reticent to create more mature interpretations if their IPs and does not push hard on visuals or immersion. Its games are not very cinematic.

But Nintendo needs to hold on to what makes it a great company.

So here's my suggestion.

Split the company into two distinct business units, perhaps with their own consumer branding. Each group leverages Nintendo's strengths but addresses changes theÂ industry has gone through.

Business unit one. Nintendo Fresh! (please forgive me for my terrible logo design)

1. Designs and builds Android-based general purpose devices. These beautiful small and medium sized devices have touch a screen AND physical controls. Here's a fun image I found of a phone-sized device. 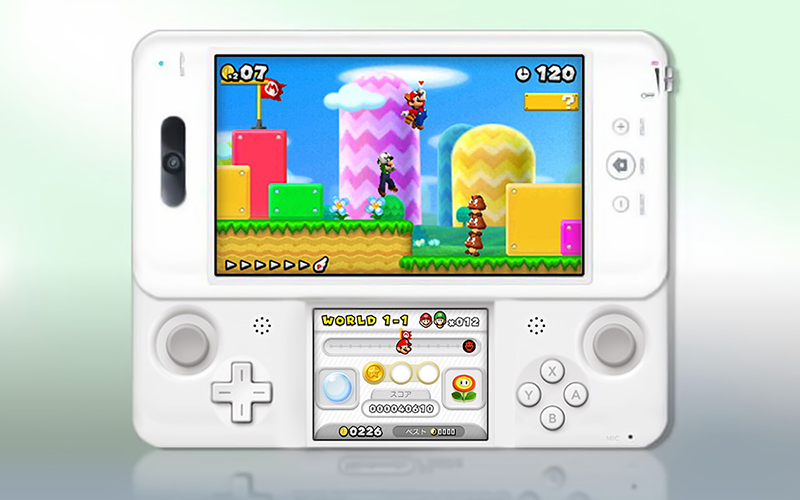 There isn't enough money in smartphone and tablet software to interest a big company like Nintendo. But there is in hardware.

These devices would be priced similarly to a DS/3DS. $200 or 24x$10 monthly payments. Sold at a profit, with similar margins to other Nintendo handhelds. The devices run a Nintendo-themed version of Android which naturally runs all other Android apps including games. Nintendo does not attempt to take a cut of the software sales through Google Play. Nintendo need to embrace the superior interface designs of companies like Google and not try to do it themselves.

Point of differentiation - Exclusive game content. The devices are the only way to access completely free full-versions of hundreds of classic Nintendo games,Â from NES to Wii. No IAPs, no catches. New games are ported and released monthly. The classic games only work with the specific hardware controllers used on these devices.

Nintendo need to understand that this audience will never pay for games again and they should use the massive power of free in combination of their peerless library of software to drive adoption of the products where revenue does come from -Â hardware.

The 3DS sells at $250, the cost of componentsÂ is about $100.Â This is pretty close to a Android tablet like a Nexus 7. Margins may need to be lower than this, but the assumption is that free world-class software and Android multifunction features would increase the audience over a device like the 3DS.

For benchmarking purposes, Samsung's Galaxy S3 Android phone hit 50 million units in just over a year. The 3DS took four years to get to 34 million. By adopting a more modern approach, Nintendo could increase the size of their handheld business enough to make up for the shortfall in handheld software sales if they make even a moderately successful device (17m units annually) in this category. Beyond that point they have a great new, modern platform to aggressively target kids and casuals. Nintendo need to side-step the battle for the TV and do things with hardware that Sony and Microsoft canât.

For these devices, they will of course create incredible Nintendo-quality games, using new and classic IPs, but with an adult focus. Imagine a photorealistic,Â darkÂ Metroid game running on a VR headset with a 98 metacritic. Imagine a deep, 100 hour Zelda adventure with 3D projections and voice recognition. You've seen 'Her', right?.

Nintendo need to recognise that they are one of the few companies the world who can make gameplay good enough to impress and excite even the most jaded core gamer - and audience they have somewhat ignored in the last decade.

By focussing on innovative hardware - a strategy that Microsoft and Sony just cannot match, Nintendo must just hope that the core audience overlooks the poor relative quality of the online experience.

They may never hit the install base they had with the Wii, but with the right hardware and software, numbers similar to the kind Microsoft and Sony achieve (along with good software attach rates)Â seem well within reach with this approach.

The market that Nintendo used to dominate in the 80s and 90s has been disrupted. As the market has been expanded by these disruptions, their traditional approach to user targeting has left them in no-man's land.

They need to jettison their weaknesses (bad UIs, expensive games for kids) and play to their strengths (hardware innovation and peerless software quality)

In some ways they need to follow the crowd (Android, going mature) but they also need to use the power of difference to give those appealing concepts a competitive new approach (fully free classic games with no IAP, whole new hardcore hardware platforms).

Nintendo probably won't choose a plan like this, but I hope they do something surprising and I wish them the best. Companies fail and die all the time, people don't bat an eyelid. Nintendo would be sorely missed if they continued the current slow sink into oblivion.