My latest game, Rocket Rascal, was just released into the iOS and Android app stores.
(You can get it here for iOS and here for Android)

It's a little too early to tell whether the game was a "success," though it has definitely had a slow start. Instead, I just wanted to discuss some of the good and bad points that came along with development.

There were definitely a few major headaches and a few places I thought would be headaches that turned out blissfully pleasant. So here we go:

What Went Right
Tumblr & TIG for Recruiting
I found the artist I worked with off a random Tumblr post, and I couldn't be more pleased with our working relationship. I put out a public call for localizers on Tumblr and TIG and within a week found all the people I needed and then some. Not a single person disappointed, a real triumph when you're trying to wrangle 11 people on a small budget and you have no prior management experience. I also put a call out to integrate third-party game characters in the game, and a lot of Tumblr/TIG developers were very awesome to let me use their works. This created a lot of opportunities for cross-promotion and fan building.

(above: one of our featured characters, Carrie, by Ink Dragon Works)

Game Dev Meetups
I host a coworking event on meetup.com that allowed me to put my game in front of people regularly and get feedback. It also provided a consistent, reliable schedule for certain aspects of development. Further, there was never going to be an Android release - I don't have an Android device, and the one device I could get access to wouldn't run the game. Some people at a different meetup allowed me to see the game running on 4 different Android devices and convinced me that Android was a feasible target. So now it exists.

Preproduction
This is such a boring point, because everyone says that prototyping is important, but Rocket Rascal really went through a large number of iterations before the core mechanics were sussed out. It went from a chaotic survival game more like Luftrausers to a portrait-style platform jumper to the rocket jumping vertical climber you see now. Preproduction took a little longer than I wanted, but I think the game is better for it. Here's an early screenshot: 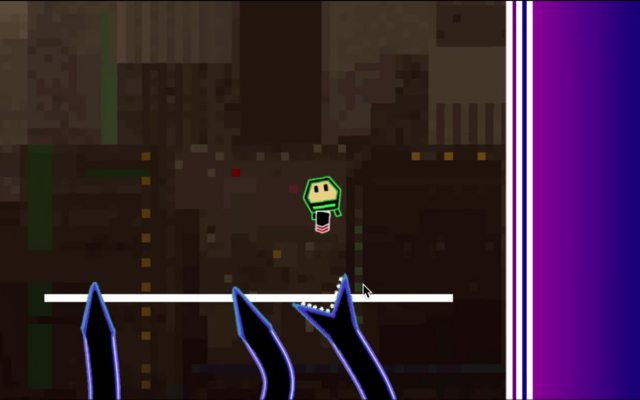 Handing Over Art Direction
This was always "my" project - I spawned the idea, ran the design, implemented everything, and managed people I needed. I knew very early that my eye for art design was less than stellar, and I sought a partner who could drive that. When I did find that person, I handed her a rough outline of the visual style I was targeting and let her run with that. She came up with the construction paper styling and the Beetlejuice-esque sandworm design and even the idea for different rocket launchers (the initial design called for multiple characters but only one rocket launcher). Had I run the art direction, things would've looked much different - and looking back, probably would've taken a lot longer and not been as good. 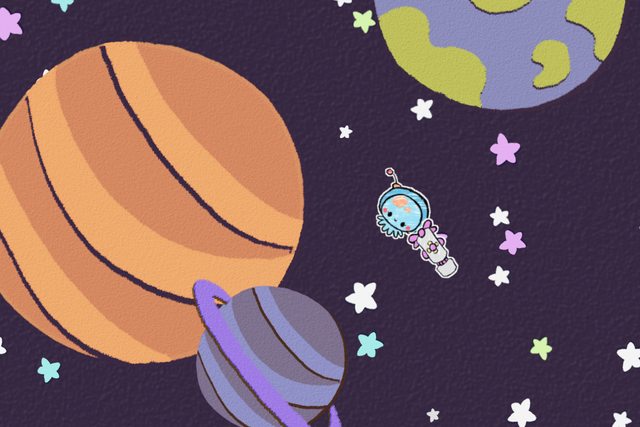 What Went Wrong
Performance
I didn't stay on top of my game's performance on actual devices, and it came back to haunt me. Near the end of development I found I had significant performance issues, and what turned into a 2-day time estimated turned into over a week plus occasional revisits. Next time I'm going to strive to stay on top of this with periodic performance checks built into my milestones.

Budget
This was a small game that I self-financed, and I let my expenses get a bit out-of-control. I didn't take into account just how much it can cost to finance 9 localizations even when you're paying sub-standard rates. Will those pay for themselves? I don't know, but I'm getting skeptical - I know so far the vast majority of my downloads are in English. So why did I do this anyway? My last game was featured in the app store, but it was only really featured in America. I became convinced that if I had localized it during the time of the promotion, it would've picked up in other countries and been more successful. Next time I'm going to start with a much smaller batch of localizations and gradually add in more as necessary.

VFX
I really wanted to go crazy with the VFX for this game. I wanted poppy visuals and really attention-grabbing effects. I tried to implement a bunch of stuff, but none of it worked - they didn't fit the game or they interfered with the play or they just weren't that good. Compound this with the fact that I don't have a very visual eye. It ended up being a lot of wasted time, and the things that made it in were not as profound as I wanted. Next time I'm going to strive to find someone else who can drive this and take my cues from them. 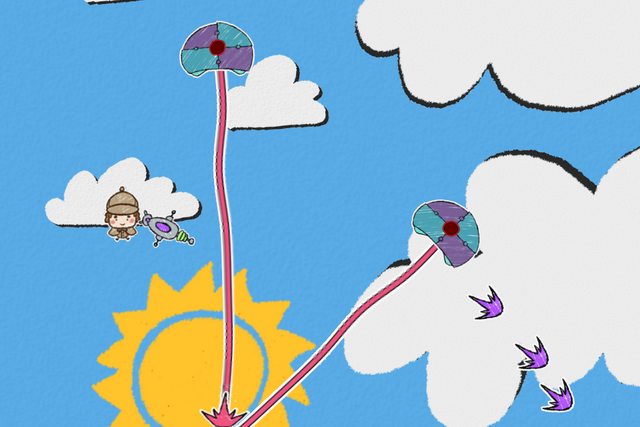 What Went ... Somewhere in Between
Unity
I'm usually a Unity proponent, and for the most part development went fine. But somewhere near the end things turned pear-shaped. I updated to a patch release and started having real troubles keeping my project from breaking. There were days where Unity would freeze or crash multiple times an hour, and the Services tab gave me no end of grief. I guess it's my own fault for switching Unity versions during the tail end of development, but I really needed a few of those bug fixes.

Localization Setup
Don't underestimate how much sheer time it takes to setup localization in iTunes Connect or Google Play, especially if you have a large number of achievements or in-app purchases. It's not hard, it's just... draining.

Conclusion
Like I said, it's too early to tell whether the game will be successful or not. The adoption rate thus far is small, and it hasn't been featured anywhere. I can't predict if any of that will change, but I'm still doing a heavy marketing push and looking for promotion venues. As any mobile developer (or any developer, really) knows, it's an uphill struggle.

Hopefully these lessons which are independent of the success of the game will be somewhat useful. I'll see a few weeks down the line whether the game's performance warrants a second postmortem. Until then, you ought go play the game maybe.