5 ways I screwed up Sol Trader's launch: a post-mortem


I released Sol Trader (Website, Steam) on the 6th June. It was my first independent video game release. The game is fundamentally unique and interesting, but the launch did not go according to plan.

Here’s my take on what happened, and what I’m doing about it for a 1.1 release in July. 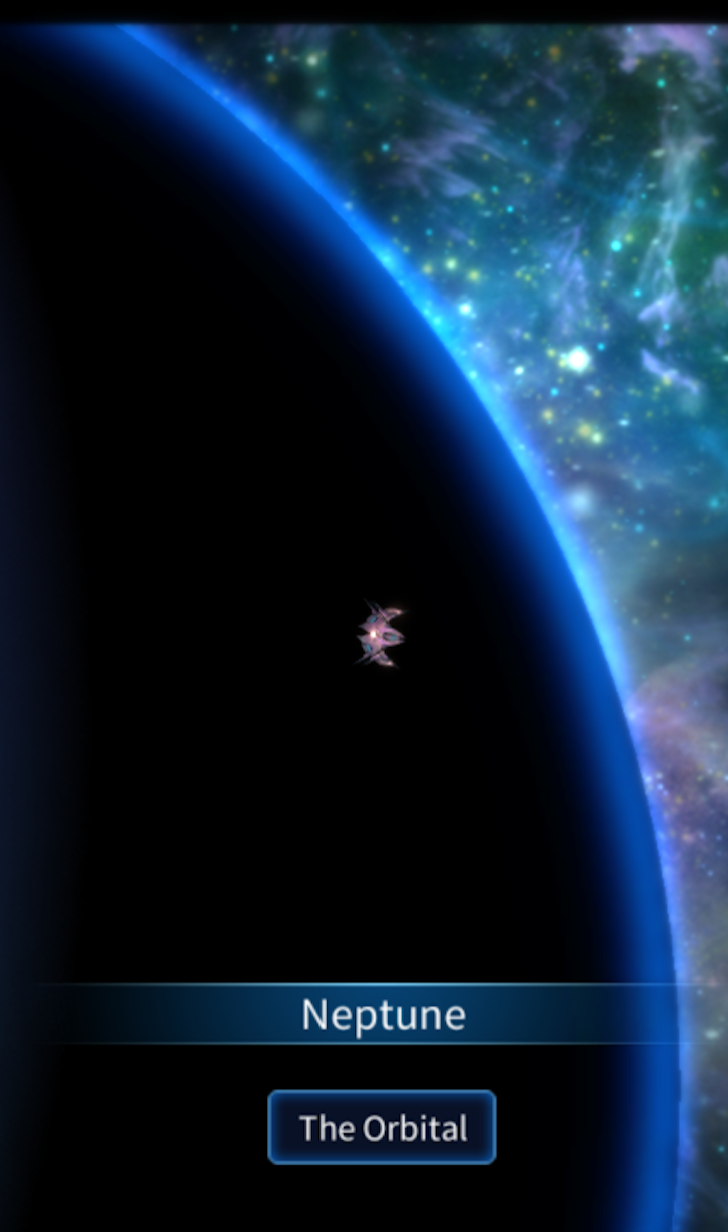 I tweaked space flight on the weekend before launch in order to make it quicker to travel between planets. This revealed a very nasty and previously hidden bug that I had unknowingly introduced several weeks earlier. The bug seriously affected space flight, causing ships to over-accelerate and become difficult to control. Because the change was made the day before launch, I didn’t have time to spot and fix this bug until 24 hours after launch. At this point, it had already caused a number of players to quit the game in frustration.

Games are different from business software: there are many more unexpected side effects and combinations of features coming together to affect the gameplay in unexpected ways.  Since I’ve been much more careful with releases, testing them on several platforms with a number of beta testers before pushing them out to the world, and ensuring that key areas of the gameplay are thoroughly checked.

2. I launched too soon to avoid big press deadlines

The initial launch was timed to avoid E3 and the launch of No Man’s Sky. In hindsight, I don’t think this mattered at all. People still played Sol Trader in any case and I believe they would have anyway. Plenty of sites have already reviewed it - the reviews were mostly positive thankfully - and No Man’s Sky was delayed last minute by a few months.

I should have finished the game, then planned the launch, not the other way around. By pushing myself to hit a deadline, I missed some of the gameplay flaws that I  mentioned earlier.

Going forward, any other game or update that I launch will be out when it’s done! 1.1 is provisionally scheduled for July, but I’m not feeling pressured to release it by then if I feel it’s not ready yet.

A system map… an obvious feature that I should have put in from the start! Turns out I was way too “close” to the game. As I have been playing Sol Trader for years, I knew exactly where everything was, and so did my beta-testers, so we felt there was no need to put a map in. I should have to given Sol Trader to some fresh players to spot these issues - just hiring some gamers from Gumtree to see how they found the game would have been so useful.

As it was, the first time I heard calls for a map was from Twitch and YouTube streamers who had early press copies of the game. This is not the ideal audience you want spotting bugs and missing features on your behalf.

Next time I launch a game, I will definitely get some fresh players in at the polish stage. In the meantime, there will be a fully interactive map in 1.1, clearly showing areas you can and cannot travel - it’s already done: 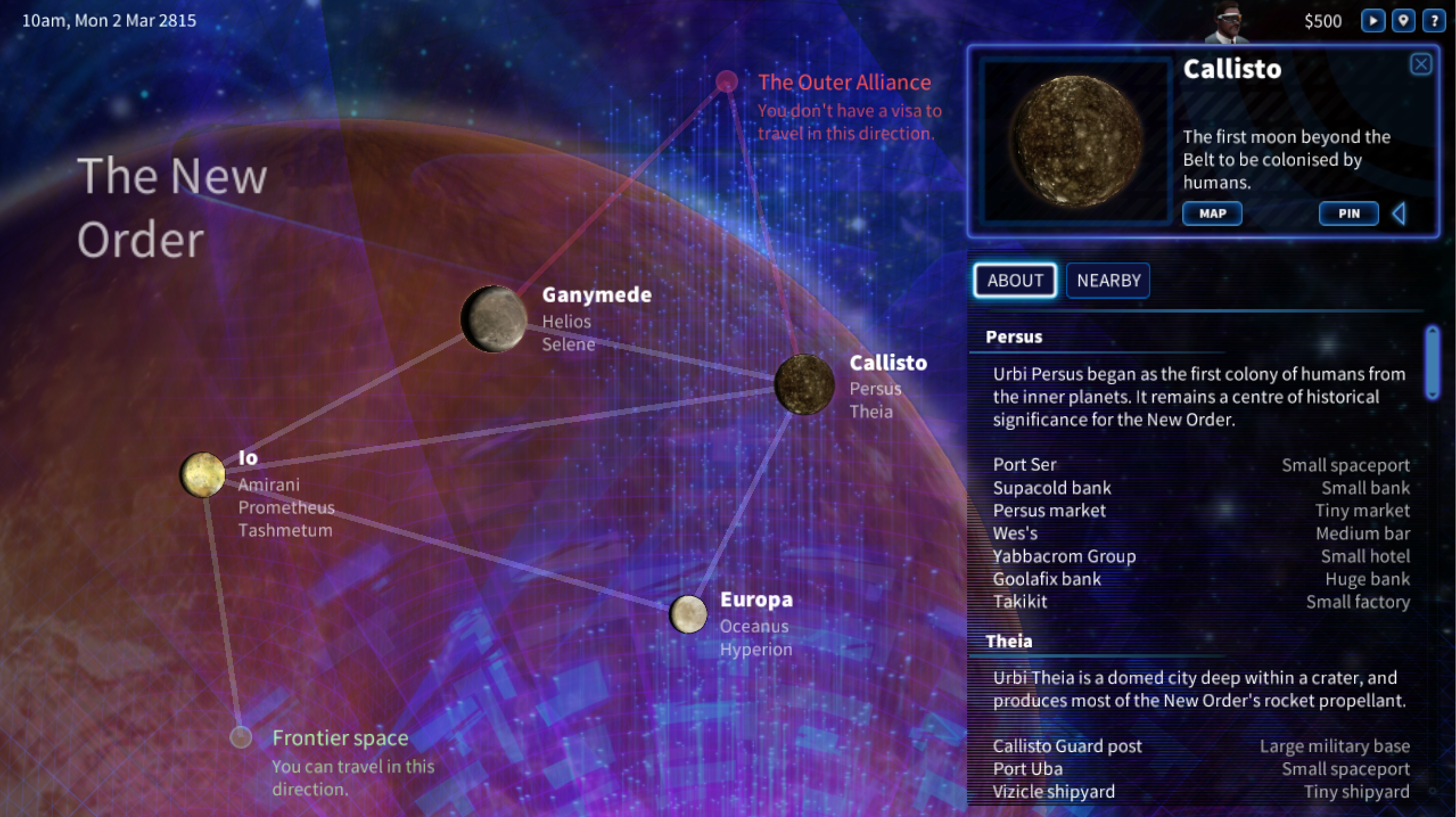 It is very hard to see design flaws when you’re so focussed on getting a finished game out. I was throwing in lots of interesting features which were exciting on their own, but weren’t coming together as a whole. My response should have been to pare back the design to the core gameplay loop and then to work hard at refining that, rather than adding yet more features in to the mix.

One example of an area that needed more “fun factor” is  the core conversation mechanic. I’ve already improved this part of the game since launch, and I’m in the process of making it more of a mini-game in its own right. I’ve released updates to the UI which make it much more intuitive to work with: 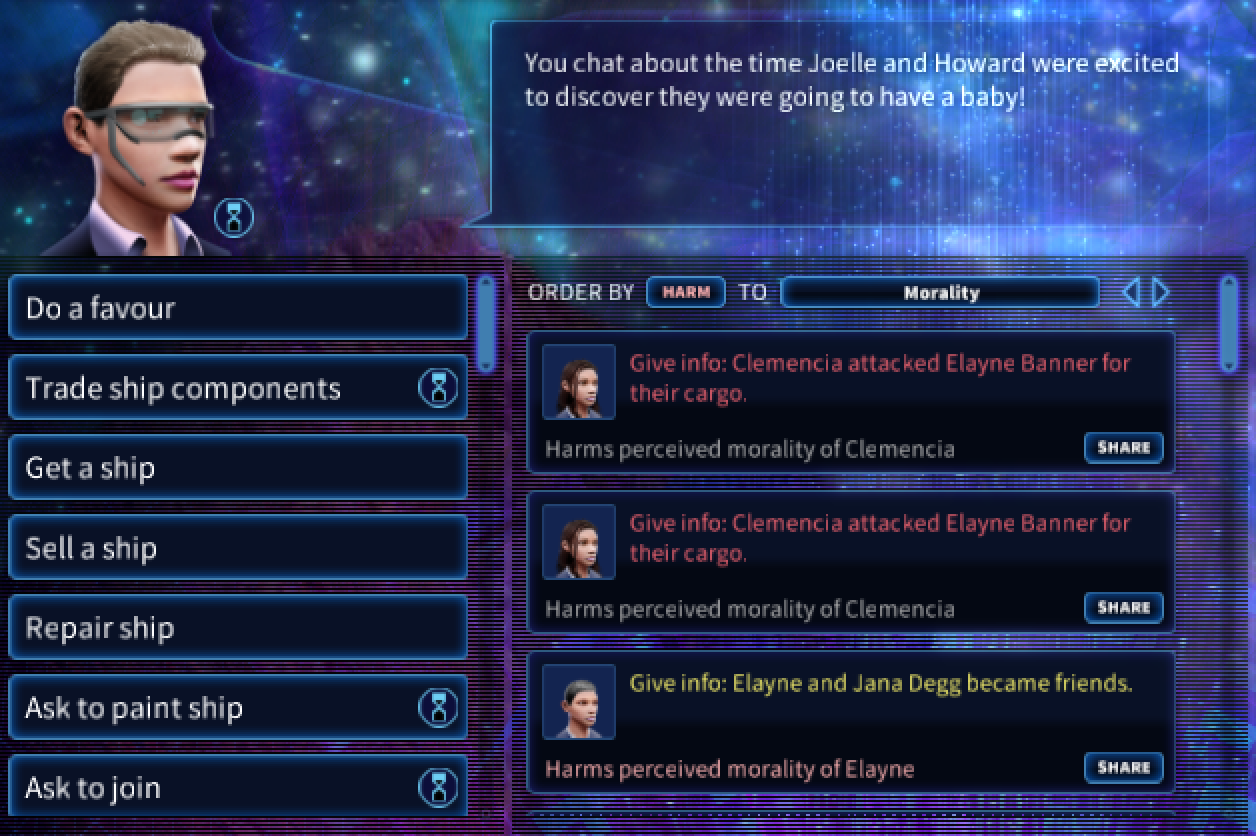 This is just the beginning: making friends with people is going to become much more of a skill. You won’t be able to earn friendship events quite so easily, which means you’ll have to pick and choose your friends very carefully, and rely more on having complementary stats. Endlessly boasting about your accomplishments is now going to seriously annoy people, so you’ll need to try more indirect methods to get people to like you…

5. I misread the expectations of the Steam audience

The audience on Steam turned out to be different to my expectations. I’m used to launching business web applications, where you “release early and often”, making lots of changes in response to feedback. It turns out that the Steam community seem more used to developers cutting and running after release if they don’t release in Early Access. Therefore, when Sol Trader was less than perfect at launch, many were unsurprisingly vocal about the issues, assuming the game would never get better.

In hindsight, a Early Access period might have been wise, so my expectations would have better matched up to those of the Steam community. After launch it’s too late for this though, so I worked very hard to bust people’s assumptions about my intentions. Even though Sol Trader is released, I still plan to continue working on it and respond to feedback as much as I can. I am very active and responsive on the Steam community forums to assure people that I’m not going anywhere. This has resulted in a lot of much needed positivity and support from the community. I’ve also made friends with a couple of active people on the forums who can beta test 1.1 for me, which is enormously helpful.

Nothing can prepare you for a release

Self-publishing your own game is like nothing else. It’s incredibly hard to get right. I can understand why people only work with publishers! I’m sorry that some people had a poor first impression of the game. Even though the launch could have gone better, I’m determined to make Sol Trader the best game it can be. I have a clear vision in my head for how I want Sol Trader to end up, and we’re not there yet. I will continue to improve it until I’m happy with it.

The game remains unique and interesting, so roll on 1.1 in July! Join the Steam community to hear more detailed updates.