How an NPR story, an Unreal tutorial, and gamer feedback turned into a Virtual Reality blind simulation.


-In late February of this year I was picking up my daughter up from Soccer on a weekend morning, and on my mind was the blog post I had written for Gamasutra entitled “10 Easy steps to become an indie dev.”.  Yeah, the title was a bit click-baity, however it was in response to a Facebook post I had seen where an acquaintance had asked what he needed to do to start making the game he had been thinking about for years.

Many of the responses he received talked about long design documents, character motivations, flow charts, etc.  This annoyed me.  Having been in game development for many moons, both in AAA and indie, I have found that often the best approach is to start creating.  I love a rough prototype over a complicated design document, or an animatic over a slick powerpoint etc, etc.  So I banged out a quick article that basically said ‘get an engine, get source control, and start making your game. No better time than now. Stop planning and start doing.’

You can read that article here.

The responses on the comments section criticizing the simplification, the engine recommendation, and overall the article itself, annoyed me. I was thinking about how to respond to them whilst driving home from soccer practice, when a story came on the radio.

The story was an interview on This American Life, called Invisible made Visible, where host Ira Glass talked to his guest Ryan Knighton about his experience in a hotel room. Ryan talked about how, because he was blind, he had to “grope” around the room trying to find the telephone in which to call his wife with. In mapping out the room in his mind by feeling around he failed to follow one wall all the way down which was hiding an alcove holding a table with the phone from him.

On that drive home, I thought, “This could be a game. I am a scripter, it wouldn’t need art, and I could show people how if you have an idea and a will to execute, you can get started!” . So over the course of the next week or two, I spent a few hours a day with a fresh install of Unreal 4 (chosen because I am very comfortable with it, although it did amuse me that several reviews mention making a game with no graphics in UE4 seemed redundant); building the game from scratch and recording the whole thing.

The basis of the game was that you would drop into a hotel room with several objects such as couches, beds, end tables, sinks, etc., while completing domestic objectives such as brushing your teeth. The original implementation was text based. As you come in contact with different objects you are given a text description of the object allowing you to build a ‘map’ of the room in your mind. The total recorded time to build the project, from firing up the engine to cooking a final build, was about 12 hours. Most of the focus of the video was using blueprint objects that use construction scripts to alter their functions in the game and how objects can share state data with each other. After some more testing and bug fixing I put the game up on Steam for $1.99 USD and also posted the entire video series on Gamasutra.

This you can view here.

Most of the initial reviews were negative by calling it “not a game” and criticizing it’s download footprint (I had forgotten to remove the starter content that came with the Unreal template I started with which I later removed). This didn’t really bother me since I felt the description of what the game was meant to reflect was accurate along with the fact that the price tag was fair. Subsequently I sent a tweet out to Ryan Knighton, the focus of the original radio story, and he seemed ecstatic that a game had been based on his experience. I sent some joking tweets to Unreal about how Hotel Blind ran at 120 frames a second even when ran on minimum spec hardware. Good times were had. 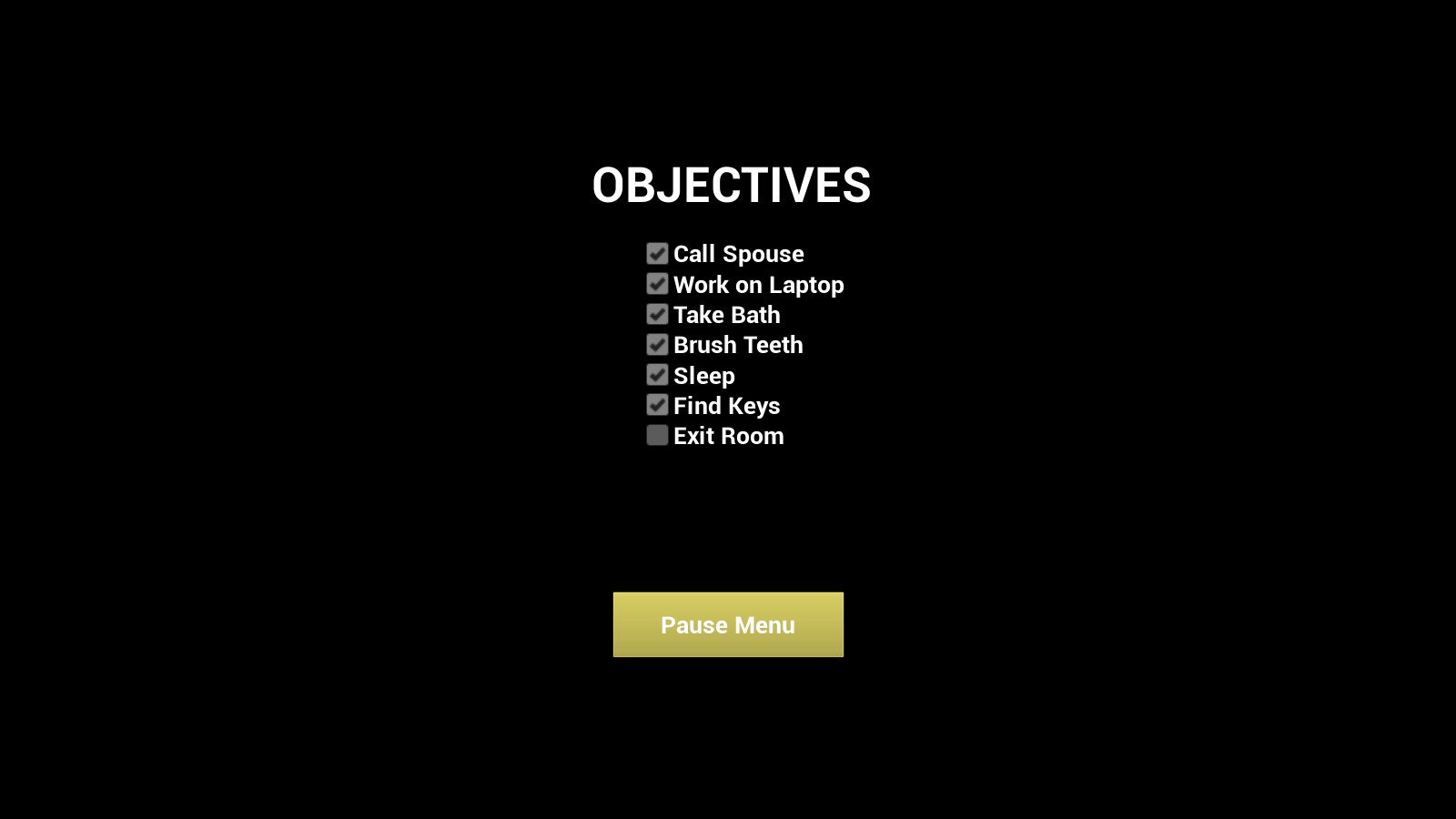 Over the course of the next few weeks I participated in various podcasts with multiple gaming focus channels and discussed Hotel Blind with them. In every instance the gamers and journalists conducting these various podcasts and interviews raised the subject of Virtual Reality (VR) technology, sometimes as a joke, and in other instances in full seriousness. Then one day whist participating a podcast with Bella Ryse (now Editor in Chief at Real Game Media and my Brand Manager), she suggested that the game would be more impactful with voice over (VO) direction rather than text popups. I thought that was a great idea and she volunteered to record the VO. Now the game had morphed from a pseudo text adventure into a game using audio to navigate a space.

The next big bump presented itself at the Game Developers Conference (GDC) later in the year.  Outside of the Moscone Center I ran across Joe Kreiner, who if you don’t know you should (he is Epic’s head of licensing for Unreal) and I mentioned to him the story of Hotel Blind and how everyone keeps bringing up VR. A week later - a package arrived and to my delight is was an HTC Vive.

Straight away I jumped in and started making the alterations of the game to be made available for VR devices. Evidently it turns out that most of the challenges with this came from integrations such as 3D menus (instead of simple screen overlays) and simply trying to support two very different interfaces (screen vs VR) in one title instead of a dedicated game (turns out, not a lot of games do this). I spent more time building the systems to detect and change the interface between VR and regular screens than I had building the base game.

E3 2016 (the biggest gaming event of the year) rolled around and Operation Supply Drop (OSD) invited me (I am an OSD advisory team member) to promote my other game at their E3 booth, which is a squad based tactical shooter called Epsilon.However, since I was going to be at E3 anyway I took this opportunity to load up a suitcase with my dev machine and VR hardware to be able to demonstrate Hotel Blind as well. In OSD’s sprawling military tent I hung up my VR sensors from paracord and gave demos to a few gamers and journalists that stopped by to check out Epsilon.

It was watching a journalist from The Escapist play Hotel Blind in VR that really hit home with me in the realization that it was growing into a real experience.Over the course of almost half an hour, using the Vive controller, she navigated the space. She quickly completed most of the objectives but struggled to find the door out of the room to complete it. Why? She got disoriented, and then she got frustrated. However, once she finished the room and pulled of the goggles, she was satisfied with her accomplishment.

At that point on the floor of E3 I truly felt that Hotel Blind was ‘a thing’, more than a small, cheap game on Steam. Was it a ‘game’? I don’t know. Was it a simulator?  Still don’t know. However, what I did know was it is now ‘a thing’.

Over the next few months an Oculus Rift arrived so went about adding that to the ever growing development list. There were numerous technical issues, again around supporting a game that could both be VR and not VR, lots of bug fixes, strange crashes, and new features - such as a radio the player can turn on to help spatially orient themselves. New VO recorded by Bella was added to the game, explaining the backstory of how it was inspired.

Yesterday, I had a call with Razer advising me that a HDK VR kit is in the mail. I feel pretty good about it. Today, I launched the VR support for Hotel Blind on Steam for Rift and Vive and I sent codes for the VR game to Ryan Knighton, and emailed NPR to see if I could put the original story into the actual game.

I did it, I ported Hotel Blind to VR.https://t.co/0PUcvnAgcN pic.twitter.com/Y361U6zYNA

The reviews are still not great, but that’s ok. It is frustrating as hell to be blind in a hotel room, and that my friends, is the whole, sole and entire point! I feel like Hotel Blind highlights some of the challenges differently abled people have to endure on a daily basis, which is something that game developers don’t often take the time to focus on and expose to the gaming community.

If you want to make a game, sit down and start making it - that’s my moral from Hotel Blind.

Hotel Blind is available for Windows PC, Oculus Rift, and HTC Vive for $1.99 USD via Steam.

OSVR support is expected to be added soon.

Thanks to Joe Kreiner, Bella Ryse, Ryan Knighton, and my daughter Isabel, who did some great QA testing for the game.