Guns of Icarus Online Post-Mortem - Epilogue: How Youtube, Steam, and Our Players Got Us This Far

From launch on 10/29/12 through May, 2014, the game has generated over $4.3M with 430K units sold. Â While weâre nowhere near the pinnacle of indie game successes, weâre really humbled by and proud of the support people have given us thus far. Â To give everyone a bit more of an idea of the how the game is doing, here are a few fun stats: Â

Game sales wise, hereâs a look at the journey it took: 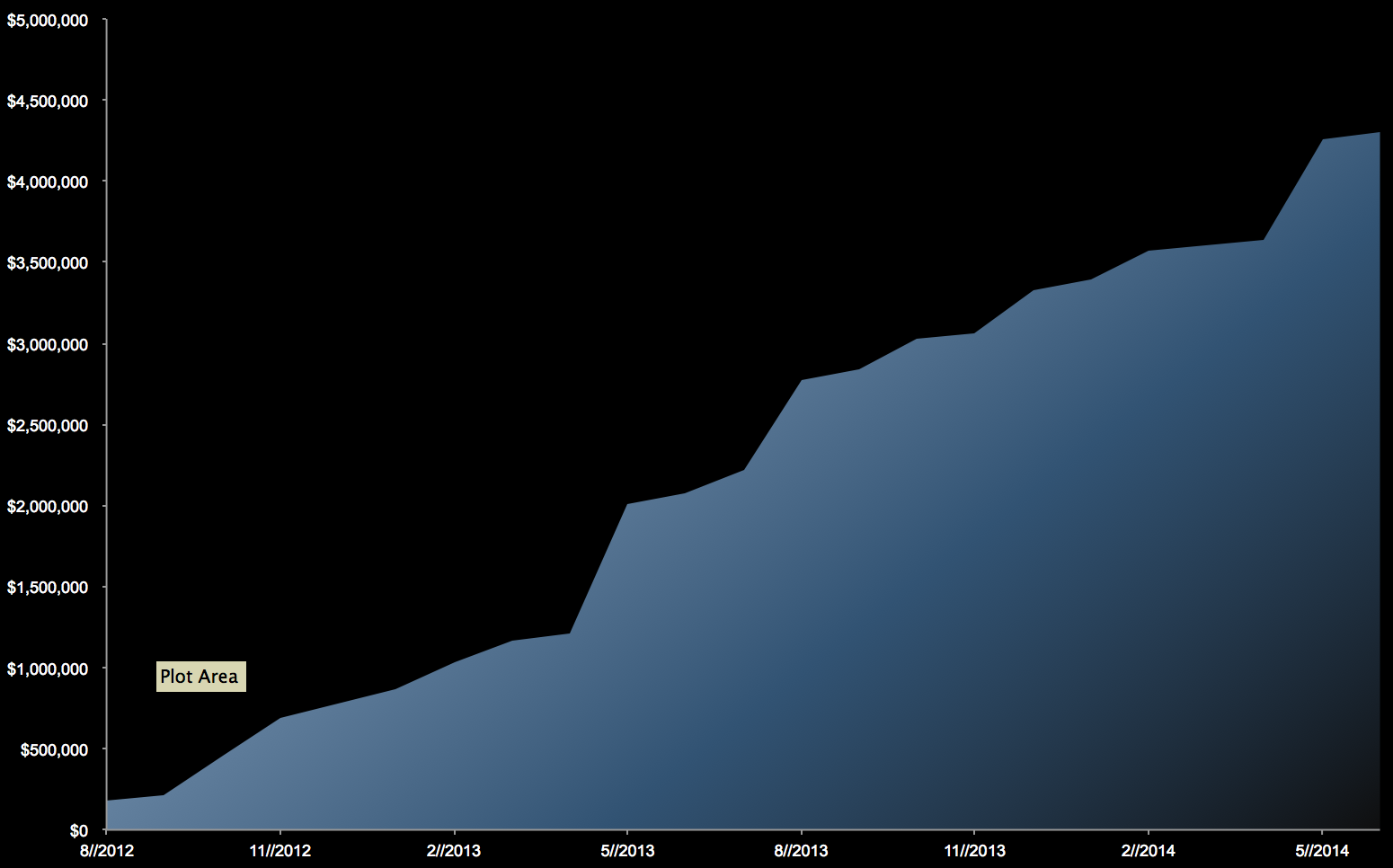 The chart above illustrates how the gameâs total sales progressed over time, and it is by no means a smooth trend. Â To see the spikiness of sales over time, hereâs another chart that shows monthly sales: 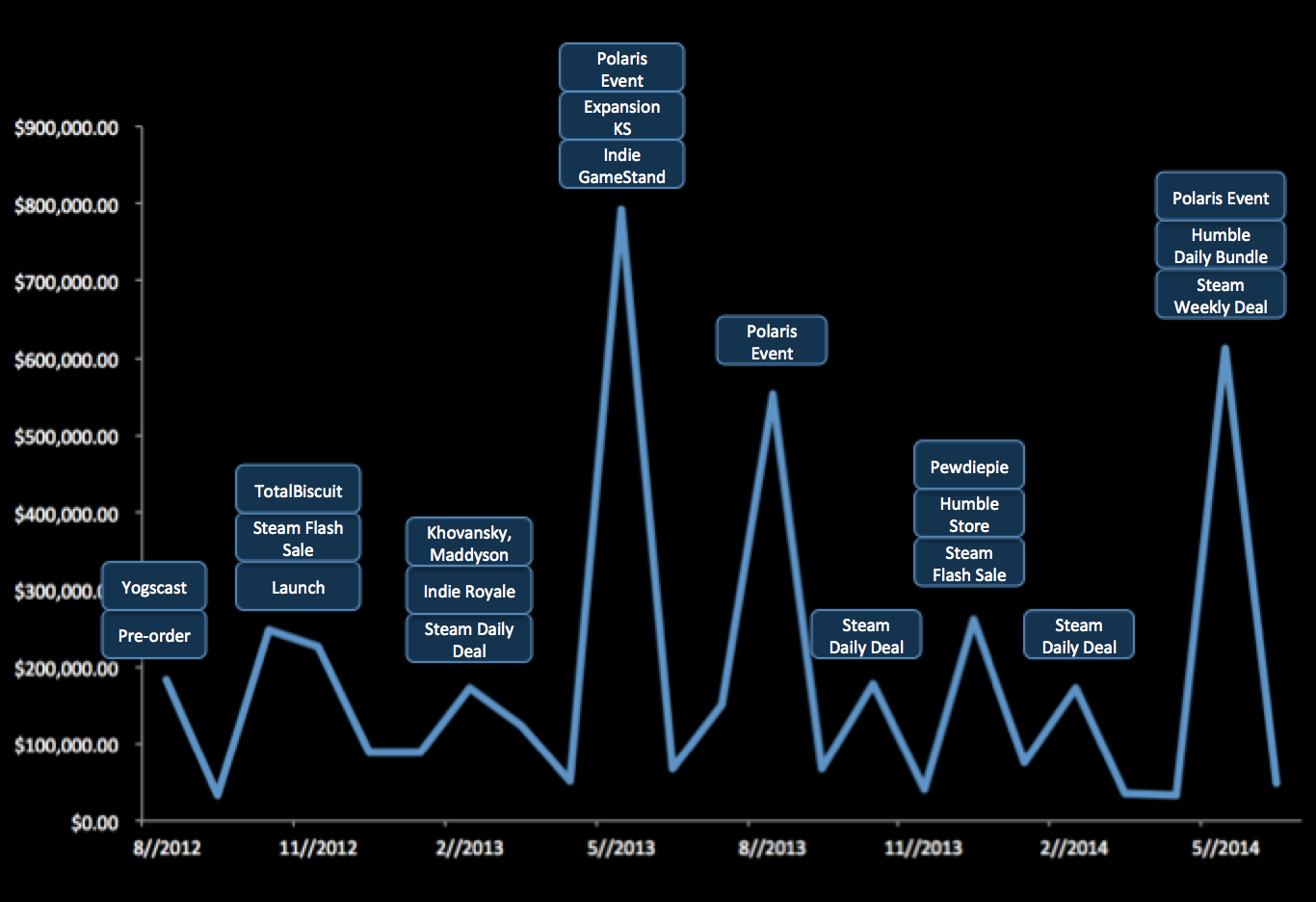 5. Â A combination of the above

The underlying driving force of game sales during any event is undoubtedly the players. Â They are the ones gifting extra copies of 4-packs to friends, helping us spread the word, writing reviews, giving us feedback, and buttressing the community of the game. Â And during events, our job is really to facilitate and support our players any way we can. Â

What we found to be most effective is to coordinate multiple events so that they would coincide by lining up our game updates (with new game features, of course) with Steam features and caster events. Â For example, this May, we were fortunate that Polaris was again interested in doing an event for the game. Â We were also set to release Ship Customization (decals, figureheads, deck themes) as well as community features (event and clan systems, competitive leaderboards, and a new player profile) for the first time. Â 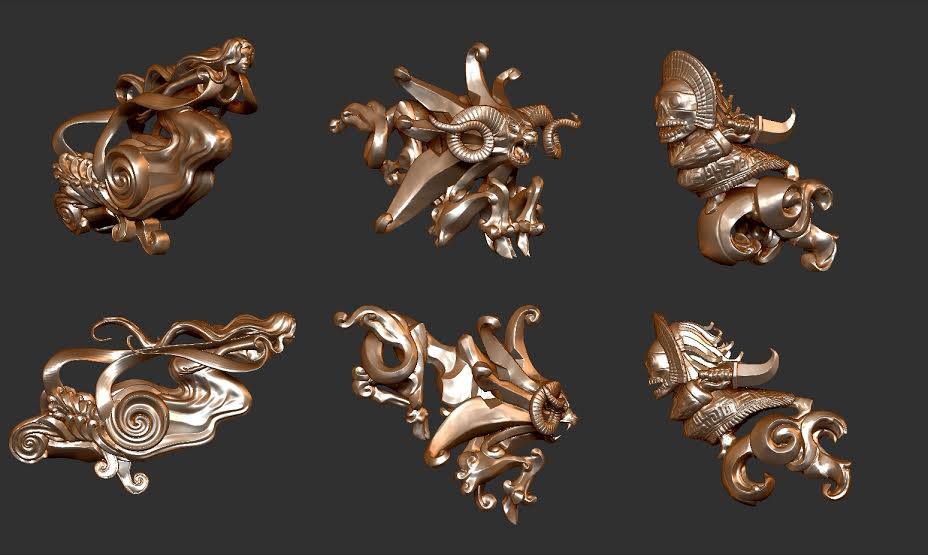 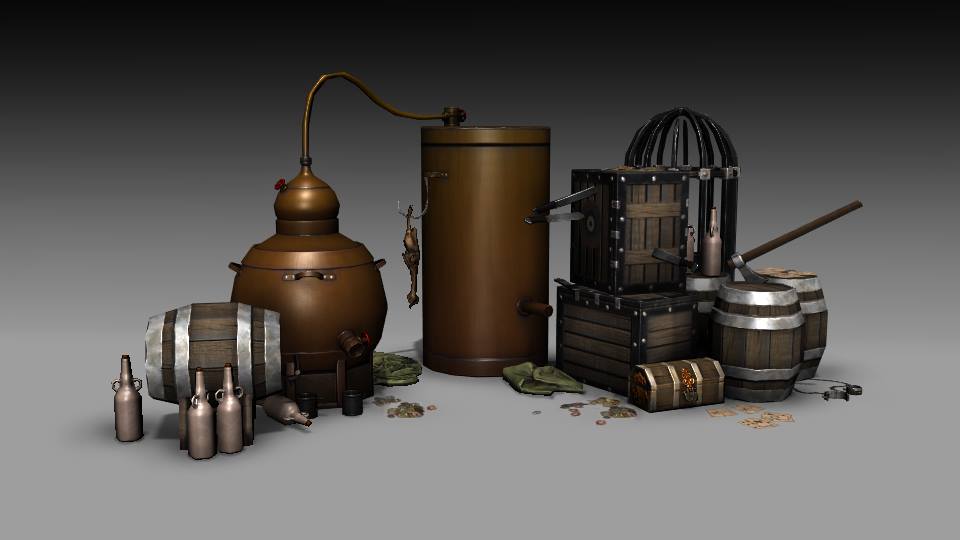 Polaris came up with an amazing event that not only brought back Jesse Cox and TotalBiscuitâs teams who have battled in game before, but also introduced the game to interested casters who havenât checked out the game previously. Â Various casters did Letâs Play videos but for the main event, TotalBiscuitâs crew (including AngryJoe, PBG, and Criken) faced off against Jesseâs crew (including Dodger, Markiplier, and Cry). Â The last time the 2 teams played, TotalBiscuitâs side was victorious. Â This time, the 2 teams returned for best out of 3 grudge matches. Â We flew along side each crew and battled in 2v2 maps. Â

To give YouTube viewers the best deals possible, we worked with Steam to get a Weeklong Deal at 75% off for all of the game packages (base game, collectorâs edition with soundtrack and costume pack, and the collectorâs edition 4-pack) but also extending our own discount days to cover the entire span of the Polaris event. Â Polaris released multiple videos over the course of several days that hyped up and culminated in a weekend release of the epic grudge match videos. Â On top of all that, we also put everything in our in-game cosmetic on sale at 50% off. Â This included all the new ship customization items we just released. Â This way, we could offer discounts to not only the new players, but the current players as well. Â

We wanted to make sure that any promotions we did for the game would be complemented by support and community events. Â We have a tradition of playing a few matches with players during our lunch hour twice a week, our âDev Hour,â where those who win against us get a free cosmetic of their choosing. Â We quickly realized that Dev Hour matches were in high demand during the promotions, so we ended up hosting multiple simultaneous Dev Hour matches and played for longer. Â This quickly taught the surge of new players an old adage that all veteran players know, âDev Hour and beating Team Muse is the best and easiest way to farm items.â

During the 2.5 weeks worth of events and videos, players bought and activated about 175K copies (including copies in the 4-packs) that totalled over $500K in sales. Â The videos from the casters generated over 3M total views. Â We reached the highest concurrent players weâve ever had and brought back quite a few of players who moved on to other games. Â However, reaching new concurrent highs uncovered new bugs and networking issues as well as hardware issues on our hosting companyâs end. Â This compelled us to spend the next 2 weeks to try to find the sources of the issues and fix them. Â We followed up with a couple of patches that improved stability and performance. Â Some players definitely suffered, and we had to make sure we supported and reimbursed them when called upon, especially given how incredibly supportive and diligent they were in submitting reports. Â

Overall, we thought everything went well, and we took the opportunity to know what we needed to improve on by listening to feedback. Â If I am to breakdown the reasons why, credit of course goes to Steam for helping us with the dates and duration of getting the game on sale, to Polaris for once again working with us, planning and organizing an incredible event with amazing casters and great videos, to the casters for their incredible support, and last but not least to our players who helped us spread the word. Â For us to have any success, we try to bring multiple events together to create as much of a virtual cycle as possible. Â

Our first exposure to the world of YouTube was back in alpha and beta. Â One day, we were just sitting in our room fixing myriad of bugs and issues, and all of a sudden there were a lot of people in game. Â We were really surprised and scrambled to support players en masse for the very first time. Â We started asking how people found out about the game, and realized that Yogscast had done a Fan Friday video of the game, where they played matches and were quite good at the game! Â They had been playing the game for a few days and decided to do a video to support the game, which weâre still really grateful for. Â Then, we were fortunate to have TotalBiscuit checking out the game and doing a WTF Is during beta. Â Before Pax East 2013, Jesse Cox and Dodger checked out the game as well and mentioned the game on the Co-Optional Podcast, which really helped with getting the word out. Â

Along the way, we realized how powerful these videos and youtube casters are in getting the word out, especially for indie developers like us. Â For instance, one YouTube video had incredibly generated over $35K in sales for us on its first day of going live. Â The players who got the game through videos of casters such as TotalBiscuit, Jesse Cox, or Yogscast were generally enthusiastic and engaged. Â Letâs Play videos are not only entertaining to watch but show actual gameplayâplayers who played for the first time after watching already had substantial knowledge of the game mechanics. Â The sales of the game from a casterâs video were generally a degree higher than written articles about the game. Â For us, itâs always a struggle to be noticed along with so many great indie games, so we treasure any coverage or exposure weâre able to get. Â Thatâs why weâre always accessible and open with the community at large. Â If there is anyone wanting to do a Letâs Play, interview, or write up, regardless of their size or reach, we welcome the opportunity. Â Yet, a videoâs power to showcase the game actually being played is undeniable. Â You just see the game being played straight through. Â All veils are lifted. 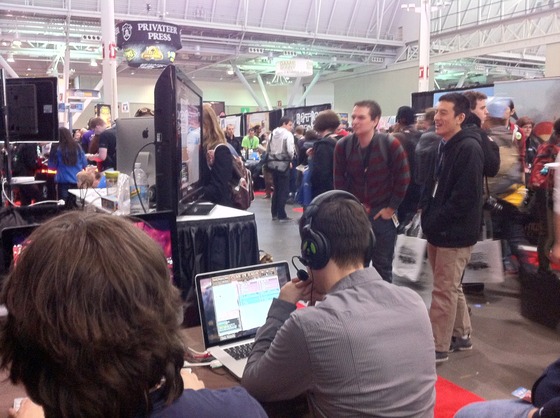 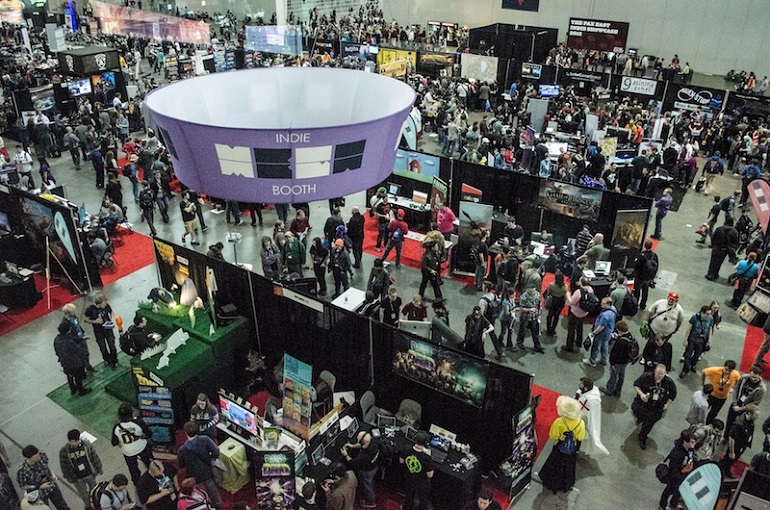 At Pax East 2013, because we had a small booth at the Indie Megabooth, people from the Polaris networked stopped by to get to know us and our game. Â After Pax, we kept in touch, and they approached and talked to us about doing an event with multiple YouTube casters. Â Jesse Cox, Dodger, and Totalbiscuit had already played the game, and they wanted to have other casters who were interested but hadnât checked out the game involved as well. Â For the proposed event, Jesse Cox and crew (Dodger, Markiplier, and Cry) battled against TotalBiscuit and crew (Criken, AngryJoe, and PBG). Â Us developers hopped aboard our own airships and paired up with each caster ship in a 2v2, best out of 3, team battle. Â Each caster created a POV video for the matches. Â

A price was established by Polaris (Polaris proposed a paid-for campaign, after all) based on the format and scale of videos and event, essentially for an estimated number of views. Â Initially, we thought the price was beyond what we could afford. Â It would be more money than weâve ever spent on promoting the game by a wide margin (going to Pax itself was then the most money weâve spent, and weâve not paid for a promotion aside from going to shows and conferences up until then). Â We were also reticent about a paid event, wondering if it would be âauthenticâ. Â After talking with Jesse and TotalBiscuit and learning that some other indie devs have done similar paid events, we decided to take the chance. Â The decision was a very difficult one because for a small indie studio like us, it was highly risky and costly. Â Yet, looking back, we were glad we took the chance and the risk. Â

Our biggest worry with the event was authenticity. Â Yet, the casters involved were great in that they were genuinely interested in the game and really tried to learn the game. Â This really showed forth in the resulting videos. Â The event ended up being a win for everyone. Â We ended up selling enough copies to make a positive return. Â We believed in the castersâ work and had no problems supporting them. Â Polaris and the casters made money to sustain their work, and the players got entertainment and hopefully a good enough of a game on sale. Â Weâve been fortunate enough to work with casters and Polaris again, sometimes paid, sometimes not. Â When working with Polaris and casters on a paid event, they would come up with amazing event formats that result in fun and engaging videos. Â While people have been debating the merit of paid events or videos, as long as the content and message are authentic, we have no problem supporting casters to create great content. Â Ultimately, we are a small developer, and getting the word out is really hard and a constant uphill battle. Â It honors and humbles us that big and small casters, and the press at large, take interest in our game. Â To have the opportunity to work with YouTube casters, paid or not, is something that weâll always consider. Â Being just one developer in a swarm of great indie titles, so long as the campaign is done honestly and with authenticity, weâll tend to take on the opportunity if we can afford it. Â