Female Gamers Want To Kill You, Just Not With Guns


In many of our blog posts at Quantic Foundry, we explore our data through the lens of gaming motivations. This time around, we’re going to focus on another kind of preference—thematic appeal. Or put another way, if the game mechanics are the same, how much does it matter that you’re killing orcs vs. space aliens?

Data From the Gamer Motivation Profile

Here at Quantic Foundry, in addition to the Gamer Motivation Profile, we also have additional research surveys that gamers can participate in. These surveys tackle a variety of game preference questions, and allow us to link gamers’ responses back to things like their motivation scores, gender, and age. 1,266 gamers participated in this research survey.

In the survey, we asked gamers to rate the appeal of different thematic settings and weapon choices. The order of the themes was randomized for each respondent. For the analysis and the charts below, we coded these appeal ratings from 1 (Not At All) to 5 (A Great Deal). 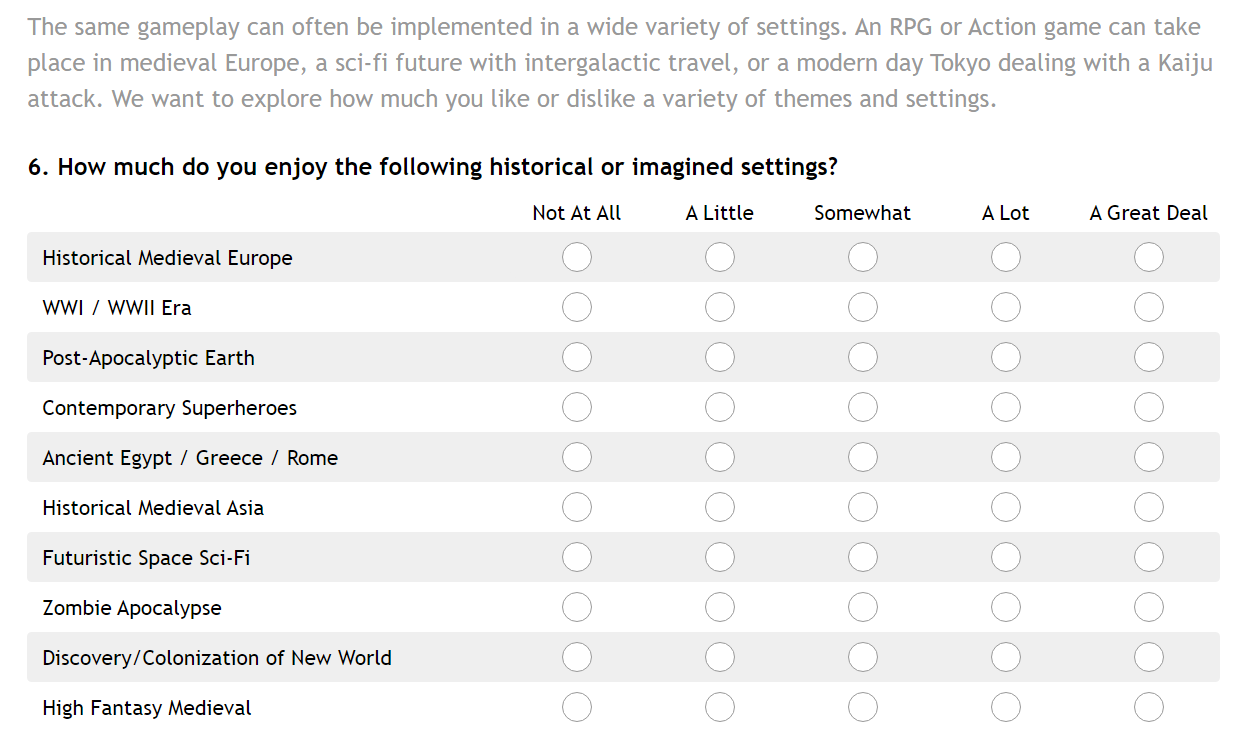 The Most Appealing Settings Are High Fantasy and Sci-Fi

The least appealing settings are Contemporary Superheroes, Zombie Apocalypse, and WWI/WWII, with a particularly large gender difference in the appeal of WWI/WWII.

Male Gamers Are Favorable Towards A Broader Range of Weapons

The largest difference between gender preferences was for Conventional Guns / Rifles (followed by futuristic Laser/Plasma Weapons). Male gamers rated these weapons as having substantially more appeal. This aligns with the results we saw from the thematic setting graph where women rated WWI/WWII (and Sci-Fi) as having less appeal than for men.

Female Gamers Are More Selective About How They Kill Things

One stereotype is that female gamers simply shy away from violent games in general. However, the results show how the reality may be far more complicated and interesting. For example, it’s clear that women don’t mind killing things with Magical Spells and Swords. In fact, women rated weapons that would lead to up-close-and-personal violence (Swords/Hammers) just as favorably as men.

The gender differences appear to have more to do with the High Fantasy vs. Sci-Fi/War split that we saw in the thematic setting chart. Women rate Magical Spells, Swords, and Bows favorably, while they showed less enthusiasm than men for Conventional Guns, Laser Weapons, Rocket Launchers, and Explosives.

In this light, it is clear that women don’t mind killing things, but they dislike using weapons that are connected to realistic, conventional warfare. Even with Futuristic/Sci-Fi weapons like Laser/Plasma Weapons, these can be considered “realistic” in the sense that they are simply more advanced guns.

These Findings Reflect The Gendered Appeal of Technology in Gaming

Both the High Fantasy vs. Sci-Fi split and the Spells/Swords vs. Guns split seem to reflect an underlying difference in attitude towards technological elements in gaming. This reminded us of a question we had in an earlier research survey of 1,082 gamers that asked about this more directly. In the survey question, we asked gamers to pick one of 3 factions in a hypothetical strategy game.

Consistent with our findings on thematic setting and weapon choice, women were more likely to seek out Nature and Magic-Based Factions while men showed a significant preference for Tech-Based Factions (by a factor of 2.4).

We again see that elements related to High Fantasy are more appealing to women, while men are more drawn toward themes involving technology.

Consistent with High Fantasy vs. Sci-Fi Findings in Genre Preference

These findings dovetail with some of our other recent findings, such as the 36% of women playing High Fantasy MMOs compared to 16% for Sci-Fi MMOs, hinting at some underlying driver that appears to push women toward High Fantasy elements. One hypothesis is that these elements (as opposed to conventional warfare) have historically been marketed toward women in other media such as books, TV, or movies. Alternatively, this may be an artifact of how game genres bundle themes/mechanics/presentation together. For example, High Fantasy games tend have more character customization options or stronger story-driven gameplay, while WWI/WWII games tend to not have playable female characters.

Rethinking What an FPS Could Be

Lastly, it is prudent to dismiss the notion that women simply aren’t interested in violent games. This would be an erroneous conclusion when you see stats like only 4% of female gamers play tactical shooters. In reality, this may have much more to do with the conventional war settings that these games typically take place in rather than the violence itself.

In turn, these findings point at market opportunities. When you take a step back, an FPS is simply about aiming/clicking on other people to kill them at a distance before they kill you. Guns are just one of many ways to implement this. Women may be much more likely to play fighting games or shooters, for example, if they were to take place in a High Fantasy environment. For example, imagine an FPS with fireballs/ice shards/invisibility spells with classes representing more offensive/defensive elemental spheres of magic.