Note: This post will contain spoilers for the game Firewatch.

Campo Santo released Firewatch in early 2016 to high reviews, praising the game's narrative and immersive atmosphere. From a writing standpoint, it was not an out-of-the-ordinary premise—you played as a middle-aged man, Henry, who, after his wife has developed Alzheimer's disease, has taken a summer job as a wildfire lookout in the Shoshone National Forest for introspection. Yet, this story, and the characters in it, has captivated players time and time again, so how did Firewatch do it? The answer is not simply in the narrative itself, but the very essence of the game itself, from the UI to visuals and gameplay. It sets itself from other games by embracing realism, that is, by feeling realistic, something that is akin to ordinary life more so than sci-fi or fantasy games. To explore more of what this means, let's break down the different aspects of Firewatch. Modern game nowadays can sometimes get carried away with their HUD and UI design, filling the screen with dozens of variables to keep track of, like time of day, weather, mini map, objective summary, and more. This creates a multi-layered film between the player and the game itself, and while some of these add-ons can be turned off, it can still feel artificial having data points in the corners of the screen as you explore the game world. What does Firewatch use as a HUD? Well, nothing really.

Firewatch has a very minimalist approach to UI, consisting of a single dot crosshair, which can even be turned off. Besides this, there's little else that will pop up on screen, outside of dialogue options for your radio, the names of objects than can be interacted with, and banners on the bottom of the screen to indicate your current objective. Aforementioned, there is no HUD to be found on screen, with your only method for orienting yourself, unless you memorized the entirety of the Shoshone, is a traditional paper map and compass. There's next to nothing in the way between you and the beautiful natural world you explore in-game.

This approach to UI can disorient players who may get lost in the forest trying to find the next cache box to open, but this is one of the many ways Firewatch tries to emulate real life. Back in the 1980's where the game is set, this method of map and compass was really the only way to get around a giant forest like the Shoshone, and getting lost in the woods could happen often if you weren't careful. Firewatch wants to put you in the shoes of a fire lookout, traversing the forest with nothing but a map and intuition, and as the game progresses, you get adjusted to the many trails and rocky slopes to get to key areas. 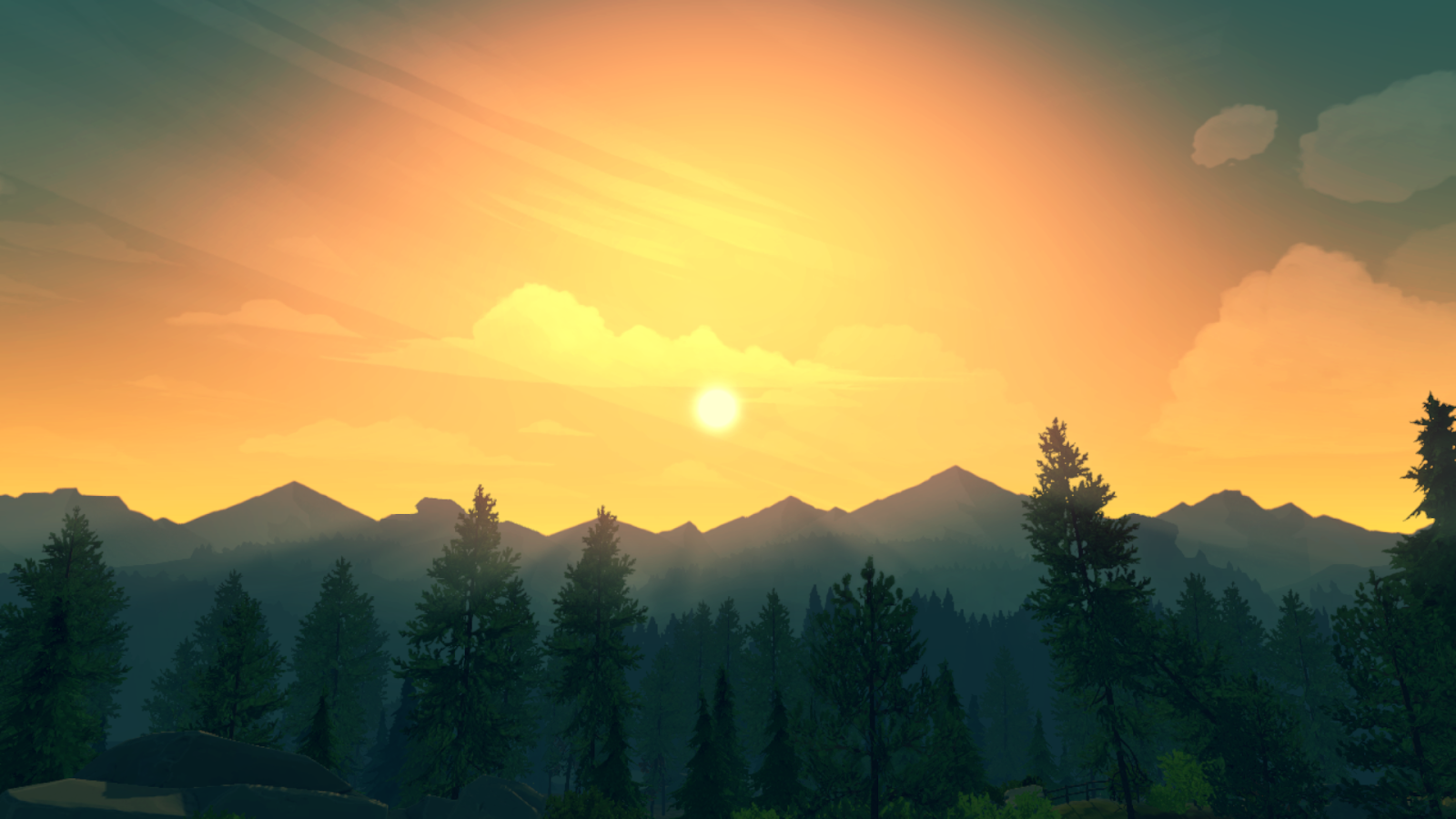 Firewatch takes place in the Shoshone National Forest in Wyoming, and besides certain locations being changed for the gameplay, the game tries to emulate the feeling of the forest as much as possible. The in-game world is lush with different types of trees, brush, flowers, and rock formations, with nothing feeling too artificial; even the lookout towers feel like a part of the landscape. The only out-of-place section of the environment is a fenced-off area that houses a biologist camp, with more details on that later. The game doesn't try to incorporate sci-fi, fantasy, or really any type of fantastical element into the atmosphere, instead leaving the Shoshone feel alive and beautiful.

In comparison to games like Mass Effect or World of Warcraft, Firewatch can feel somewhat mundane with just how ordinary it is. This simplicity, on the other hand, entrances us as players as it's something we can recognize from real life. We know what it's like to have these expansive forests isolated from society, and we often fantasize about escaping from city life to this type of beautiful unknown. The world of Firewatch draws us in not because it's an arcane world of magic or an advanced civilization at the edge of the cosmos, but because it's somewhere we could realistically go to, it's something we may yearn to explore for ourselves. 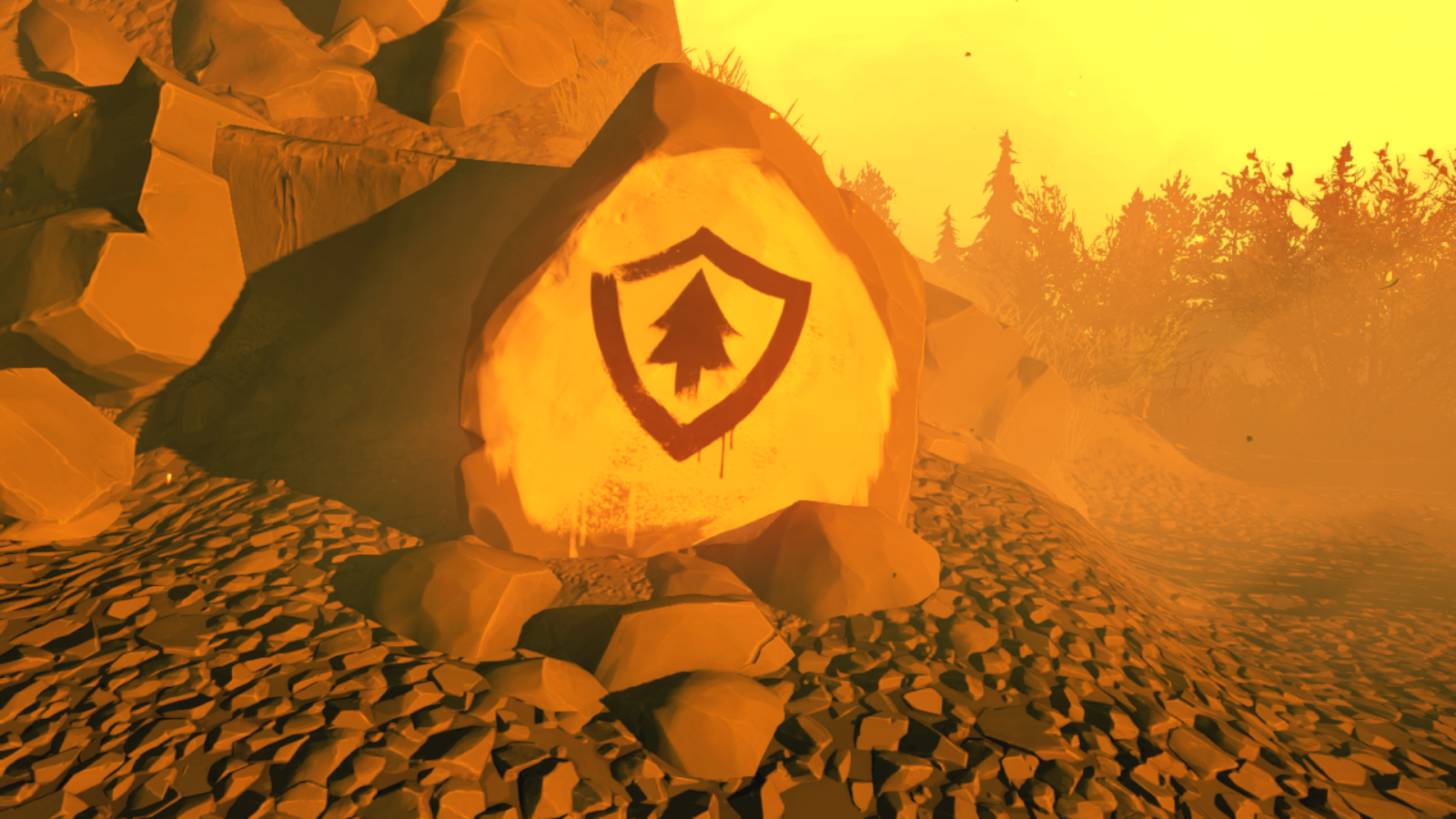 Gameplay is typically where Firewatch gets the most mixed reviews and the title of being a "walking simulator." There's no combat, no shooting, no dramatic feats of acrobatics, nothing; Henry can only jog, rappel down rocky slopes, jump from certain areas, or pick up items that normally have no other purpose than being a small collectible in the lookout tower. Players were often left wanting more from the gameplay besides walking on trails or climbing up hills, but therein lies the question: what else could Henry do? He's an average man in his mid-40's, nothing special physically or magically about him. And that is where some of the most intriguing parts of the game arises.

Firewatch approaches the feeling of being a fire lookout from multiple angles, and this includes how Henry plays. A real human in his role would do similar tasks, with even more time inside the lookout tower watching over the forest and keeping an eye on their firefinder, and even the game skips over these parts. Henry might not be doing something particularly exciting, but that's the point Campo Santo is making, it's not an outlandish job filled with great excitement. Although it's not very thrilling, it feels natural, taken straight out of real life. So, Firewatch gets another point on the board for trying to recreate our real world.

The Story and Characters 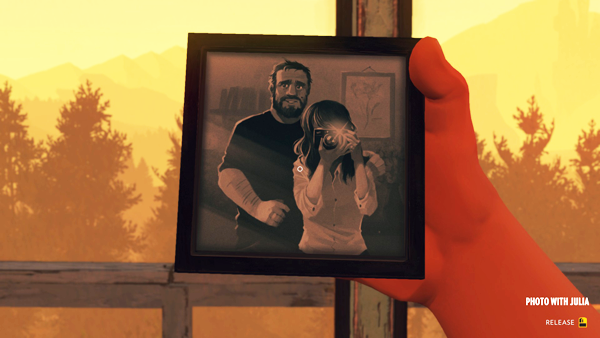 The story of Firewatch is one of its most acclaimed, and panned, aspects of its whole. Henry's journey as he tries to come to terms with his wife Julia's dementia, mixed with the looming threat of a government conspiracy watching his and fellow fire lookout Delilah's every move, makes for a thrilling, yet sympathetic narrative. As the government conspiracy comes to its apex, with Henry having discovered their tracking technology and notes on his conversations with Delilah, Firewatch reveals the truth about this great enigma:

There is no conspiracy.

What truly happens involves a side plot that develops slowly in between Henry and Delilah's conversations. Delilah gradually tells Henry the story of Ned and Brian Goodwin, a suspectedly traumatized veteran and his young son who took on the job of Two Forks Lookout Tower rangers prior to Henry's arrival. As the duo were settling in quite well, they mysteriously left one day without alerting Delilah or anyone else for the reason why. Prior to the big reveal of the conspiracy hoax, there is another major reveal that Henry discovers as he is locked in a cave by a mysterious entity:

It's at this point that all the pieces surrounding the "conspiracy" comes together, as Ned Goodwin tells Henry via a cassette tape that after Brian's death in a climbing accident, his grief prevented him from going back to society, and thus he has been living in the forest ever since; it's also revealed that Ned was the one documenting Henry and Delilah's conversations, planting evidence at a biologist's research camp to make it seem like a government conspiracy.

This sudden twist in plot did not sit well with many players, as they felt cheated out of a climax of suspense and revelation, and instead were met with the tragic story of the Goodwins. Some players also lost interest in the story as a whole, feeling bored by the story of an average, melancholic man spending his days watching over the forest. On the other end of the spectrum are those that loved the story and its twists, and these twists are what make Firewatch definitively feel human.

The story of Firewatch does not fit well into any particular genre—not suspenseful enough to be a thriller, not quite fitting the criteria of science fiction, and so on. Instead, it is best to consider the game's story as realist: weaving the lives of complex characters together over a mostly normal plot structure. There are no moments of extravagance, no affairs, no extraterrestrial mysteries. The plot seems to build up to a big conspiracy, but Firewatch is not dystopian, instead turning towards the experiences of a shell of a father blindsided with grief. Players may have wanted a government scheme at the climax, but Firewatch is emulating life, and this simply would not fit into the realist flow. By following this theme of realism all the way through, Firewatch is able to focus on its characters and develop them intricately, making them seem alive with their own thoughts and emotions. Mixed with the mundane, yet tranquil nature of Henry's daily routine and the calming atmosphere that envelops the player, the game ends up feeling personal, something that players can both empathize and sympathize with, and an experience they may relate to in their own lives.

Conclusion: What Makes a Game Realist? It's rare for a game to try and closely mimic real life, after all, games are sometimes meant to be an escape from the real world, not necessarily a reflection of it. Yet, Campo Santo decided to take the "realist" approach for Firewatch, stripping down UI, menu and gameplay complexity, and even fantasy elements from the plot in order to create a game that feels personal and emotionally intelligent. The game does not entice players with an atmosphere of the supernatural or science fiction, but one of human empathy and experience, one of connecting with the characters on screen. Thus is the realm of realism in games, making up for its lack of extravagance and escapism for down-to-earth narratives with intricate characters and a highly immersive atmosphere thanks to its similarity to real life. The realist approach does not suit every player, being very low key in action and fairly straightforward with gameplay, yet for establishing a narrative with characters that feel rich and complex, realism can be a powerful tool that goes against the grain of what games are thought to be like, and Firewatch shows this in full force.