Retro Game of the Day! SimCity

Retro Game of the Day! SimCity SimCity by Nintendo, released in 1991 for the Super Nintendo. 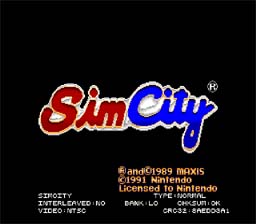 Will Wright's classic creation, and certainly one of the game-changers of the industry back in its day. SimCity appeared years earlier on personal computers, but my first taste of this incredible game was on the Super Nintendo. Alright, let me rectify that - I had a prior glimpse of the game running in all it's black-and-white glory on a Macintosh, but my "spoiled by Nintendo" eyeballs were a little put off by the aesthetic. Besides, the screen was just so full of.. stuff.. how could this be any fun? 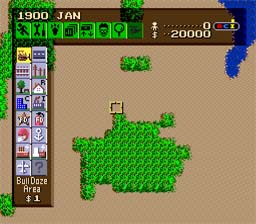 Answer: easily! SimCity was one of the first "interactive computer toys" to really enjoy widespread popularity on such a huge scale, and certainly launched one of the most successful and longest-running franchises in the history of the medium (ultimately, The Sims!) The game tasked you with being the mayor and chief construction officer of a large, empty chunk of land; you were tasked with growing it into a sprawling, self-sufficient metropolis. You needed to lay down all the roads, railways, structures, powerplants, football stadiums, etc. Other responsibilities required the player to zone different areas appropriately (commercial, residential, and industrial) and be sure to position them properly so as to draw inhabitants to your city, to live, work and play. You needed to monitor things like traffic, import/export, taxes, police and fire coverage and of course prevent everything from deteriorating with time. For a Nintendo game, this was unheard-of complicated; but is was presented very brightly and cheerfully, with that usual "Nintendo Charm." It certainly stood in stark contrast to other North American launch offerings, perhaps that was one of the reasons why it was so popular.

SimCity was an incredibly complex game, but it had a certain charm that felt like "Legos for grown-ups" - you built this city (on rock and rolllll) and in just a short time it already started feeling absolutely alive. The game has certainly aged over the decades, but even it's earliest incarnations are still quite fun to just pick up and play from scratch to this day; although it did birth a whole new genre, nothing has ever matched the even keel of simplistic complexity prevalent in this wonderful game.